“America needs a good old fashioned spanking” because people have tattoos, beards, and don’t dress up? That may be the dumbest thing I’ve ever heard. 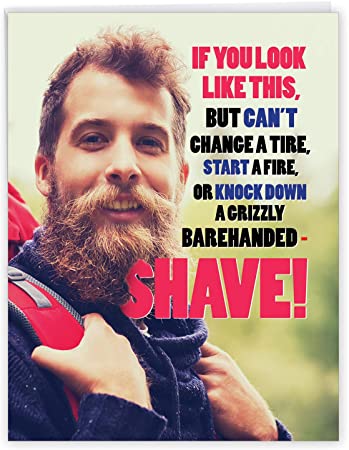 Meh - hair and beards are just fashion. I was a biker, and accumulated many tattoos. I have a beard most of the time - perhaps some of y'all who are so down on beards might flip through some history books -

My grandma used to talk about her grandad's beard being very long, the guys from that generation wore beards often. They took up arms against an invading army and persevered through four years of hardship, and were the very finest examples of manliness in my opinion.

So when you see some dude with tattoos and a beard, he may be a fashion queen, or he may be an unreconstructed rebel.

Some generation(s) allowed this to happen, it wasn't the flip of a switch so be careful when the finger pointing starts lol. An older guy I knew, died several years ago at the age of 103 claimed everything started downhill with the arrival of the Beetles lol. True or not, that is about the correct timing of liberal, drug induced free thinking and love. He was a life long farmer, and voted for FDR when he became old enough to vote. Voted democrat in every election afterwards except for Obama's second election. "I voted for him the first time and have voted Democrat for the last 80 years but by God if I'll do it again, he'll ruin this country if he gets back in". Pretty accurate I think.
G

I was born in fiddy seven and first flew commercially in 1977, Las Vegas to OKC on a 727. I really enjoyed that.

Back then people at least bathed and used deodorant in addition to wearing neat and clean clothing. Nowadays if you fly people are using a Piggly Wiggly bag for carry on luggage and wearing clothing that if donated to Goodwill would be immediately thrown into the dumpster.

Today most men don't owned a suit or even a sport coat and slacks and decent shoes. We are getting to the age where we are having to go to more and more funerals, and a few weddings, and people are showing up wearing their best sweat pants, wife beater tee shirts and their best flip flops. Women too, are showing up wearing their tightest yoga pants and other such. Such a sad decorum to a funeral.

2busy said:
I had never even seen duck dynasty until a month or so ago and I don't think I have watched an entire episode. Typically winter time is the only time I have a beard and that is because it helps keep my face warmer while out in the cold. It's not something that I feel like a have to have year round. It doesn't stay on in the summer long enough to get to duck dynasty length.
Click to expand...

Used to grow a beard every winter for the same reason. Never had a desk job.

Sporting one of 7+ weeks now, 'cause this stupid shoulder still hurts to lift my arm (what little I can). Shaving just hasn't been worth the effort.

Progun223 said:
“America needs a good old fashioned spanking” because people have tattoos, beards, and don’t dress up? That may be the dumbest thing I’ve ever heard.
Click to expand...

Manners, diction, education, personal hygiene, grooming, work ethic, consideration for others, demeanor and decorum have all tanked. The people I really would like to see horse-whipped in public are those pigs that are too lazy to find a garbage can.

About manners. The streets in Lawton are horribly rough. I have to slow down driving them. Some bespectacled older woman behind me the other day blasted her horn at me for braking for a spot on the Wolf Creek bridge, Cache Road westbound, where the pavement had buckled. There is more than one lane and people can pass if they are in such a hurry. I went to amazon.com and ordered a custom magnetic bumper sticker to go on the back of my car. It's yellow with bold black letters that read "THIS CAR SLOWS DOWN FOR BUMPS". Those small cars like my '95 Corolla just don't float like they are on air over these nasty Oklahoma and north Texas roads. I have to let impatient folks know exactly why I'm braking. These rude people are probably so numb in the head they can't even feel their skulls bang their headliner when they hit these potholes driving like a bat out of hell. I've heard rumors one can order special Oklahoma suspension packages on certain new vehicles. Somebody in power evidently doesn't want to raid the local government kitty to pave the streets in Lawton truly decent. Men with hard hats on tractors don't work for free. America's infrastructure is becoming 3rd or 4th world like.

I have not flown on an airplane since 2002. I did not realize there was body odor now on airliners. My mother said that folks who went around stinking had no pride in themselves.

People, guys and gals both, are also much fatter these days. Laziness, too much electronic gizmos, little physical exercise and gluttony. The most presentable people I see around Lawton these days are real old people, soldiers on Fort Sill and local law enforcement. I was delightfully surprised yesterday to see one younger male employee at Walmart actually clean-shaven. It was both pleasant and shocking for my eyes to see. This young fellow was slender too and did not have weird hair.
Last edited: Oct 8, 2021

I remember getting dressed to go out to dinner with a suit and tie. I remember women in dresses instead of sweat suits out shopping. I remember women wearing gloves to go to movies or church. I will never wear jeans and a shirt in church. That is just my upbringing.

Pa and The Rifle

An Obituary worth sharing
2 3