Are these tech companies getting to big and monopolistic?

i would say heck yeah they are! There needs to be some antitrust going on in the US! Amazon, google, Facebook are 3 that come to my mind. 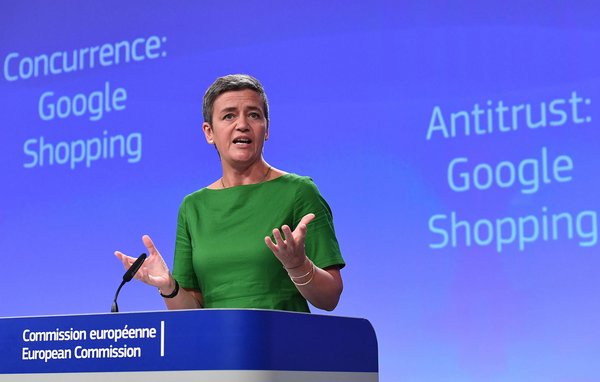 Margrethe Vestager, the European Union antitrust chief, in Brussels on Tuesday. In addition to the Google case, she has previously demanded that Apple pay $14.5 billion in back taxes in Ireland, opened an investigation into Amazon’s tax practices in Europe and raised concerns about Facebook’s dominance over people’s digital data.

Google suffered a major blow on Tuesday after European antitrust officials fined the search giant a record $2.7 billion for unfairly favoring some of its own services over those of rivals.

The penalty, of 2.4 billion euros, highlights the aggressive stance that European officials have taken in regulating many of the world’s largest technology companies, going significantly further than their American counterparts.

By levying the fine against Google — more than double the previous largest penalty in this type of antitrust case — Margrethe Vestager, the European Union’s antitrust chief, also laid claim to being the Western world’s most active regulator of digital services, an industry still dominated by Silicon Valley.

“In Europe, companies must compete on the merits regardless if they are European or not,” she said on Tuesday. “What Google has done is illegal under E.U. antitrust rules.”

The apparent focus on Silicon Valley has prompted accusations from some in the United States that the European Union is unfairly targeting American companies. Officials in the bloc vigorously deny those claims.

Still, in recent years, Ms. Vestager hasdemanded that Apple repay $14.5 billion in back taxes in Ireland, opened an investigation into Amazon’s tax practices in Europe and raised concerns about Facebook’s gathering and handling of data. The companies deny any wrongdoing.

In targeting the activities of these digital giants, experts say, European authorities are laying down a marker for more hands-on control of how the digital world operates. And while the $2.7 billion fine announced on Tuesday is tiny compared with Google’s $90 billion in annual revenue, it highlights the region’s willingness to dole out sizable penalties.

While the fine will garner attention, the focus will most likely shift quickly to the changes that Google will have to make to comply with the antitrust decision, potentially leaving it vulnerable to regular monitoring of its closely guarded search algorithm.

Europe’s latest efforts to rein in technology companies stem from continuing unease that Silicon Valley has come to dominate how the continent’s 500 million citizens interact online.

“Europe is setting the agenda,” said Nicolas Petit, a professor of competition law and economics at the University of Liège in Belgium. “It’s always been like that.”

In her statement on Tuesday, Ms. Vestager said that Google held a dominant position in online search, requiring the company to take extra measures to ensure that its digital services did not crowd out those of rivals.

The antitrust decision related to Google’s online shopping service, which the European Commission, the executive arm of the European Union, said had received preferential treatment compared with those of rivals in specialized search results.

Analysts say such so-called vertical search products — also including those for restaurant and business reviews — represent a fast-growing percentage of Google’s annual revenue. The company does not break out earnings figures for this unit in its financial reports.

The search company is facing two separate antitrust charges in Europe related to Android, its popular mobile software, and to some of its advertising products. Google denies the accusations.

Google rebuffed the European Union’s claims on Tuesday, saying that its services had helped the region’s digital economy grow. It has also said that significant online competition remains in Europe, including from companies like Amazon and eBay.

“We respectfully disagree with the conclusions announced today,” Kent Walker, the company’s general counsel, said in a statement. “We will review the commission’s decision in detail as we consider an appeal, and we look forward to continuing to make our case.”


Despite Google’s denials, the record fine — the previous high, against Intel in 2009, was €1.06 billion — represents a bloody nose for a company that holds a market share of more than 90 percent in online search in Europe.

Several other antitrust complaints related to other specialized search results have been filed in Europe against Google, and Ms. Vestager said Tuesday’s announcement could “be used as a framework” in those investigations.

That may eventually lead to further fines if European authorities find wrongdoing. The complaints include many from other American technology companies, including Oracle, News Corporation and Yelp, which have been vocal advocates of large fines against Google.

Google has 90 days to respond to the European Commission’s demands, or face penalties of up to 5 percent of the average daily global revenue of Alphabet, its parent company. European officials said on Tuesday that they would regularly monitor the company’s activities to ensure that it was complying with the ruling.

Under European rules, the company — and not the regulator — must come up with proposals to guarantee that it treats competitors fairly when people make online search queries. The authorities can demand that Google make further changes if they are not satisfied with the initial proposals.

Analysts and many of Google’s competitors have called for an independent monitor to oversee the company’s digital services in Europe, which could include oversight of its search algorithms, some of Google’s most important intellectual property. The company is likely to fiercely oppose such a move.

Google has other options, including the removal of some of its specialized search services from Europe, or returning them to how they operated before the European Union’s investigation began almost a decade ago.

Whatever the outcome, analysts say they expect a protracted legal battle that will continue for several years as both Google and its rivals fight to define how search services are provided in Europe and elsewhere.

“Google’s search engine has played a decisive role in determining what most of us read, use and purchase online,” said Shivaun Raff, a co-founder of Foundem, a British comparison-shopping site that was the first company to file a complaint against Google. “Left unchecked, there are few limits to this gatekeeper power,” she added.

I still don't see how Facebook is worth a fraction of what they say. Compared to the others above, Facebook makes nothing, provides nothing, if you liquidate its assets, there's still basically nothing. I can see it going away when the next "big thing" rolls around next generation.

deerwhacker444 said:
I still don't see how Facebook is worth a fraction of what they say. Compared to the others above, Facebook makes nothing, provides nothing, if you liquidate its assets, there's still basically nothing. I can see it going away when the next "big thing" rolls around next generation.
Click to expand...

Don't discount the value of their user data. Between what the website collects, the app collects, messenger collects, they are sitting on highly valuable information for millions upon millions of people.

Not to mention their advertising reach.

Thats false.
Advertising is their bread n butter and they do charge for it.

Facebook provides the drug that social media addicts need. There's value in that.

Bust the trust!! Yes simply stated they are a monopoly. Where is the Gubment for this!!

deerwhacker444 said:
I still don't see how Facebook is worth a fraction of what they say. Compared to the others above, Facebook makes nothing, provides nothing, if you liquidate its assets, there's still basically nothing. I can see it going away when the next "big thing" rolls around next generation.
Click to expand...

In the last quarter Facebook had over $8 billion in revenue and had EPS of over a dollar. They are worth every cent the market has decided they are worth.

Ace_on_the_Turn said:
They are worth every cent the market has decided they are worth.
Click to expand...

Indeed. As with any commodity, it's worth whatever someone is willing to pay.

In case you haven't noticed information is worth far more than the sales and profit generated from the devices we use to give them the information. Google should be sued and by far more than the EU , anyone ever notice that something they look at on eBay or Amazon shows up in adds when you are doing google searches. They track what we look at and when and what we purchase, most of those internet companies are tracking what we do and buy and use it to there advantage.....they know what they are doing ...unless they are Yahoo in which case they are friggin worthless.......

Holly crap. I hope you're invested in a Nasdaq index fund today!