I'm worried about the phrase "has not necessarily been made." "Necessarily" is a weasel-word; the way it's used here, it makes the sentence mean nothing more than "maybe, maybe not," negating the whole reversal. All that document says is that we're not guaranteeing we'll bust you; it doesn't remove their option to do so.

Call me a cynic, tell me I'm reading it with a lawyer's jaundiced eye--and you'd be right on both--but I don't see any protection in there, and I don't trust the BATFE any further than I can comfortably spit a rat.

Thanks for the reply. It will be less of a worry factor now.

vooduchikn said:
"an NFA firearm has not necessarily been made when the device is not reconfigured for use as a shoulder stock – even if the attached firearm happens to be fired from the shoulder. To the extent that the January 2015 Open Letter implied or has been construed to hold that incidental, sporadic, or situational “use” of an arm-brace (in its original approved configuration) equipped firearm from a firing position at or near the shoulder was sufficient to constitute “redesign,” such interpretations are incorrect and not consistent with ATF’s interpretation of the statute or the manner in which it has historically been enforced"

In its original approved configuration. The finding doesn't list manufacturers. IMHO, you are good to go. Guess you will be pulling that 9MM at you have up? I have been eyeballing it. 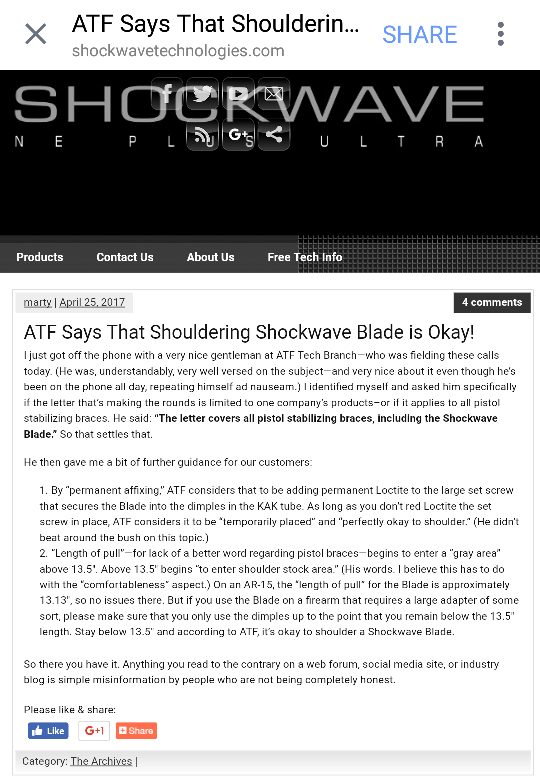 Sent from my SM-G900R4 using Tapatalk

Lawsuit against the atf.
2 3