Atwoods may not be the store you want to rob

AKguy1985 said:
Hey I was there too. Interesting they don't have the ammo under lock and key.
Click to expand...

Weird, that’s was i was telling a person I was taking to while looking at the ammo. The old store and the Owasso store has it behind glass.
You weren’t one of those seasoned guys I was taking to were you?

I don't know. It has been quite some time since I was even "in" an Atwoods, let alone shopping for clothes.

AKguy1985 said:
Hey I was there too. Interesting they don't have the ammo under lock and key.
Click to expand...

Ponca City store has the ammo out on a shelf.

i got a rain barrel from there. it's the same red food grade plastic ones used for olive shipping from greece. other sites have them double the price, atwood's sells them for $50 with a spigot already tapped at the bottom.

SlugSlinger said:
There is a new Atwoods building in Claremore that I visited this morning. Finally found some decent priced HP 9mm ammo.
Click to expand...

I was in there a couple of days ago, they had pretty decent stock of ammo for current day conditions. I scored a 525 count box of Winchester bulk .22 LR.

SlugSlinger said:
Not necessarily due to this story, but as many of you know the folks that shop at Atwoods, like myself, are NOT (edit) your typical Walmart shopper. Normally, my first stop is the gun counter.

I think the pukes that tried to rob the place got lucky they ran into a bada$$ 71 year old female. She was able to keep the store from being robbed. Not sure what would have happened if someone was carrying and came across some jackwagon trying to choke out an employee.

And I am not sure what kind of employees they have in Mannford, but in the stores I shop in Rogers county, there are some big ole farm boys running around that place. I'm 6'4" @ 250 lbs and those boys make me looks small.

A 71-Year-Old Grandmother has a black eye after she was punched in the face at Atwoods in Sand Springs while trying to stop two shoplifters.
Peggy Swineheart says one of the shoplifters had a store employee in a chokehold, so she stepped in to help.
"She had him in such a tight chokehold, I really thought he was going to die,” said Swineheart.

Swineheart stopped at AtwoodsTuesday night to buy a new smoker. She says while she was there she noticed two women carrying dozens of coats.

"I thought well that's weird, but then when I got to the checkout stand I could see the manager was upset and he said they're not going to get by with that again,” said Swineheart.

Peggy says the employees started to block the door to try to stop the women from leaving and an employee knocked the clothes out of her arms. Peggy says the woman then started punching the 18-Year-Old employee and the other woman had him in a chokehold, so Peggy went over and started hitting one of the women trying to help.

"Finally she let go and she came right for me and boom boom,” said Swineheart. "She knocked me down on the ground and I was bleeding right here on my forehead."

Sand Springs Police say the two women then left the store and got into a black car. Deputy Chief Todd Enzbrenner says they were trying to steal about $1,200.00 worth of clothes

"They were able to get in the car and drive off, they didn't get any merchandise though," said Enzbrenner. “One of the suspects was kind enough to leave her phone behind.”

"I'm just glad it turned out okay,” said Swineheart. “If she would've had a knife or a gun, we would've been in trouble."

Peggy just turned 71 and recently had cataract surgery. She says she still has some bruising from the surgery and from a recent fall. Peggy says she’s just thankful she and the employee are both okay.

“You don't think about it, you just react and that's all I knew to do, just beat on her until hopefully, she'd let go,” said Swineheart. “It was the right thing to do. I would hope someone would do that for me or my grand kid.”

Police say one of the women left her phone behind, so they are working to identify her from that, but they say if you know who they are call 918-245-8777. 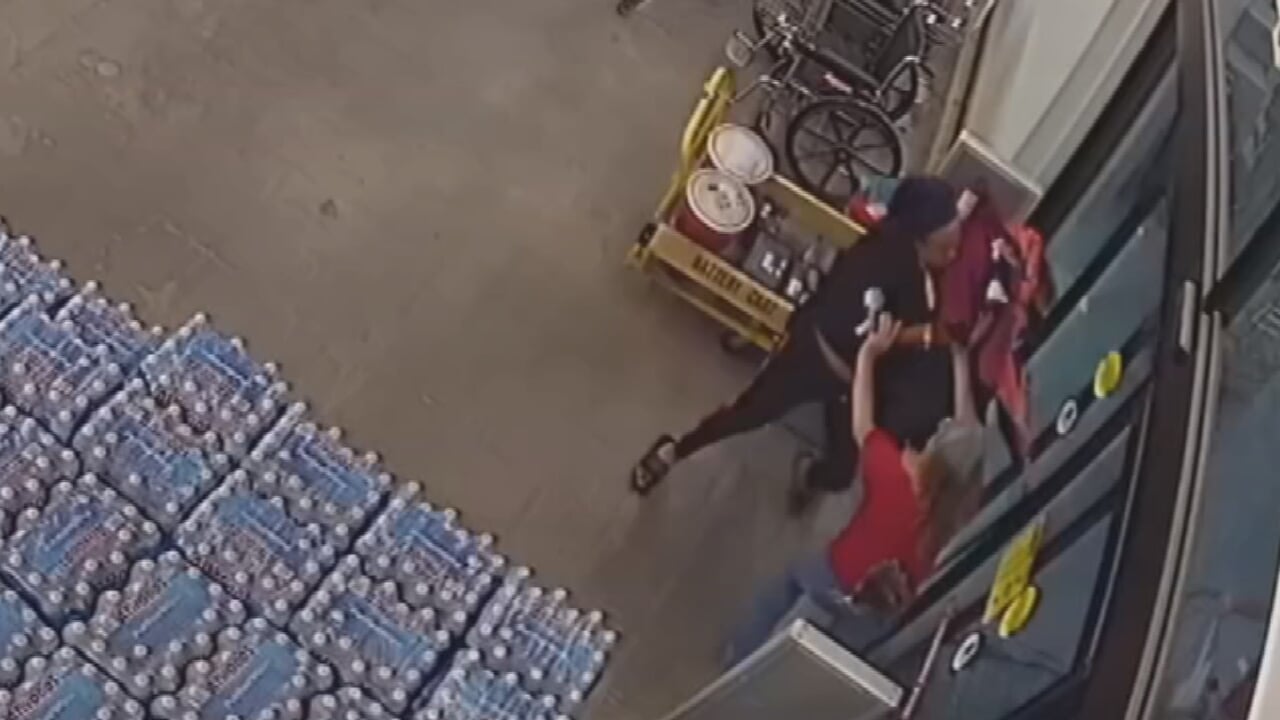 A 71-Year-Old Grandmother has a black eye after she was punched in the face at Atwoods in Sand Springs while trying to stop two shoplifters.

I dont blame security,employees,or customers for not helping. The smart thing to do is to walk outside and write down their tag number, period. Morons that shoplift for a living are also stupid enough to wound or kill anyone interfering. These aren't brain surgeons. This is why businesses usually tell employees not to try to stop them, they know these are desperate morons usually needing drug money. Now if they display a knife or gun then feel free to shoot them, but understand in 2022 you'll get sued and may well lose the case. Trying to be a hero can get innocent people killed, and in most large, liberal cities the person trying to help is more likely to get charged than the criminal is.

Just a note to theiving scum. This is NOT San Fransico buddy and our Okie grandmothers are tuff as nails.

I Think My Mother is Going Senile
2 3

Woman Fell Into A World of......Forget The Phone!