OHJEEZE said:
When I first saw that pic, I was thinking John Deere got into ar's
Click to expand...

It reminds me of some kind of cartoon snake or something.

I'm holding out for this one... 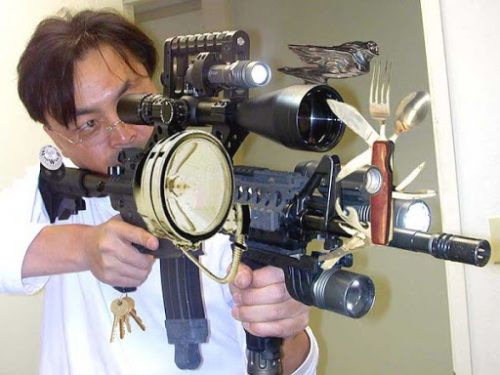 In regard to stocks I am a big fan of the Magpul CTR or similar stocks that have the locking function to take most of the rattle out of them. I have used both BCM and Magpul forward grips. The BCM vertical grip is slightly angled so you can use it as a vertical grip or also grip the gun more like what the AFG style grips allow. I have liked both pretty well.

Here is my build specs for a dream hunting/ precision build, I wouldn't call it budget though.

Gunbuffer said:
Rule #1
If your optic doesn’t cost 1-1.5x what the rifle did then you’re just a poser-plinker
Click to expand...

I'm more of an AK guy than AR, but I'll add a recommendation for Swampfox optics. They compare favorably with other mid to higher end optics and won't break the bank. I got recommended them originally by an author I read.

I like cheap stuff, but have been getting into higher end parts lately.

For a budget:
Lower

Light: 25-50 for cheap but functional

Back up sights: included with upper.

O4L said:
It reminds me of some kind of cartoon snake or something.
Click to expand...

reminds me of the Jurassic park Ford explorer.
O

What you want to spend I believe should largely be determined by what your going to do with the rifle.

Preface: My home defense and home offense (yep, "home offense") rifles are Daniel Defense DDM4V7s, and my ranch rifle is an FN DMR II...I use factory rifles for anything that I might have to use to protect myself or my family...no point in possibly opening the can of legal worms associated with shooting someone with a home-built gun.

I have put together one "budget build", and bought my F-I-L a $560 (then) S&W M&P Sport. Both of those rifles work well. They go bang, and haven't failed me yet. Still, I know there is a little more slop in the rifles and the quality/level of testing isn't there when compared to things that cost 2-3x as much. Out of the 7-8 ARs that I've put together using quality parts I've yet to have one that won't shoot very well, and I've had all of one malfunction across any of them in the field, hunting hogs. However the build prices were in the $1,250-1,400 range...and could have even much higher.

I don't think a $600 AR is something that you should be ashamed of at the range. With a few hundred trouble-free rounds through it I'd even say that it is home defense worthy. But I would definitely be more suspect until I had a decent round count through it.

However, if my life were on the line daily...if I were back overseas or if I were a police officer, I'd certainly shell out for "mil-spec" and beyond. This is what I did for my personal defensive firearms.

Guns are tools, and looking at it from a tool analogy; I wouldn't expect a successful race car mechanic to buy the Pittsburgh line of Chinese tools at Harbor Freight for his job. Nor would a guy who only changes his oil need a garage full of Snap-On tools.

The last two rifles I've slapped together have been for my dad, and have been a hybrid of component quality of sorts. Both have used Anderson uppers and lowers, which have mated perfectly. Both have Aero LPKs and Aero enhanced buffer tube kits, and both rifles have LaRue MBT2S triggers too. However one has an Anderson rail, while the other a Midwest Industries...and I can definitely tell a quality difference there. One has a Ballistic Advantage barrel and BCG, the other a Wilson Combat barrel and Toolcraft BCG...I don't really notice a huge difference between them, but the Wilson barrel has been less finicky...however the BA barrel hammers M855 for some reason. Component wise, I think I kept both builds to around $900 -1K and they work perfectly for an old man that likes to do some informal target shooting.

I've built probably 10-15 rifles up from scratch using psa parts kits. I think the most important aspect of building successfully, from budget components is just checking your parts to be certain they are "in spec", prior to putting everything together. Calipers are your friend.

Before 2 years ago, a perfectly functioning, basic rifle could be put together for $400-$450. Those prices are obviously done for now, but it's still cheaper by far to assemble your own receivers (80% lower), and build out your own uppers than it is to buy them pre-built.

K
Someone please school me on "solvent traps"
2 3