PBramble said:
Worried about 90 miles south of the US? Have you seen the Denver airport?
Click to expand...

What's up there? I hate flying through that airport. I travel with firearms. Zero issues anywhere but Denver.

WW3 is slowly building and only the blind do not see it. Our usual "not our problem crew" will want to ignore it until to late and it will cost us millions of young men and women.

dennishoddy said:
What's up there? I hate flying through that airport. I travel with firearms. Zero issues anywhere but Denver.
Click to expand... 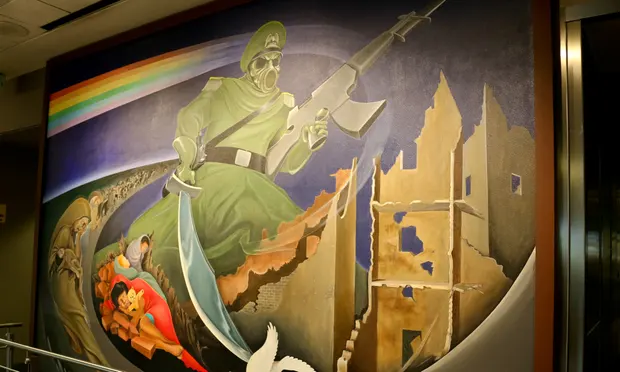 Supposedly quiet a few things that have lead to conspiracy theories about the creators and benefactors.

Holy crap! That looks just like a propaganda photo in the mother country!
O

Communist China has BIG PLANS of world DOMINATION! They are the undisputed number two economic power on earth right now, thanks to the U.S. and the rest of the Civilized world buying their counterfeit merchandise, built with SLAVE LABOR! The poor people of China don't get this money, the Communist Party does, and this has made them a SUPER POWER over the last few decades! I suspect this last presidential election was planned, and executed, by Communist China Military Intelligence, and they NOW HAVE A PUPPET REGIME IN THE WHITE HOUSE, AS WELL AS MUCH OF CONGRESS ON BOTH SIDES! This plan was much to sophisticated, and well executed to have been planned by democrats, they simply are not that smart! This was so well planned, and executed, that over a year later half the population still don't know what happened, and the other half still think they WON? Venezuela was a test run of this plan, and they even used the same voting machines! If YOU want to know what will happen here, look at what happened in Venezuela! 1,000,000% INFLATION PER YEAR FOR SEVERAL YEARS! They use $100,000.00 Venezuelan Bills for toilet paper, because they are cheaper, and more readily avalable than real toilet paper! Venezuela has the LARGEST PROVEN RESERVES OF CRUDE OIL ON EARTH, AS WELL AS RICH MINERAL DEPOSITS, INCLUDING GOLD! Communist China has started OPENLY taking control of these Venezuelan assets just since our 2020 election. Watch as Communist China takes over Taiwan something thay have wanted to do since 1949, in the NEXT FEW MONTHS, IF NOT WEEKS! Russia is no threat to us, and this is likely just a diversion! I also suspect Communist China has secretly been buying up stocks in ALL of our 6 or 7 news media, and social media corporations, over the last decade or so, under fictisious names, including Fox News, and now OWN A CONTRLING INTREST IN ALL NEWS AND SOCIAL MEDIA OUTLETS IN THIS COUNTRY! DO YOU THINK THEY WOULD LIKE TO HAVE TOTAL CONTROL OF EVERYTHING WE HEAR, SEE, AND THINK? GOOD LUCK TO US!!!!!!!!!!!!!

Watch facts matter with Roman posted yesterday on YT, title is 150k truckers but has a lot more about the topic here.

Profreedomokie said:
I read the other day on one of the new webpages that Chinese troops were training in Canada. Why ? They have cold areas in China where they could train.
Click to expand...

I have a feeling that you already know why. I know why, several others that frequent this forum know why, our lying worthless POS government knows why, yet the press lies about this and everybody just looks the other way..

US GIVES foreign aid to China. Borrows it back, with interest, to GIVE more aid.

China is buying farmland in OKLAHOMA.

China is buying US stocks, not just media.
They have been buying lead, for years.

They bought Pedo Joe and then, the election, with Venezuelan voting machines.

Brush up your Mandarian
C

well i am going to get all biblical on ya. history is full of wars and conflicts where a much smaller even decimated force of men have routed world powers and sent them on their heels and even completely obliterated their enemy. but these men had God on their side. now here in USA we have almost completely taken God out of our life. go ahead flame me... it just proves my point.

I had a black woman ask for my Chinese receipt from the Chinese cash register at the Chinese goods store today. I kept walking …

These Marines were falsely accused of war crimes. Twelve years later, they have vindication.