Do you know what "liverwurst" is?

Never had it. But it did trigger childhood memories of Scooby-Doo and Shaggy.

Doesn't look like something that I would enjoy....but to each his own...
H

My dad loved the stuff. I could smell it in the living room when he would break it out in the kitchen. I tried it a few times as a kid and teen. That was enough for me.

I'm familiar with it, so how smart do you have to be really?

No friggin' way....and Limburger cheese. My friends dad used to eat both.

Sorry, but Liverwurst and Spam won't ever be on my dietary desires.

I had an inmate on my work crew once who raved about the stuff. I'd eat the ass out of a dead rotting cow if I was hungry, but that stuff looked like hell. I finally tried it a few years later when I seen it at a butcher shop. It wasn't too bad actually. I'm not standing in line for hours to get it, but I'd eat it again.

My mother and grandfather were crazy about liverwurst so those sandwiches were commonplace growing up. About 8 years ago, I asked a young man at a supermarket, in California, where the "TV dinners" were and he had not a clue what I was talking about. Some boomers here might remember the TV dinners. I haven't looked real hard, but there should be plenty of grits in OK Walmarts and I'm sure they would know what I was talking about if I asked where to find them. Let's see, they are in the cereal aisle? America has cultural divides across regions, including foods. Oscar Madison mentioned liverwurst on one episode of The Odd Couple so I gather liverwurst fits right in with New York culture with Jews and delis, that whole thing. In neither Oklahoma nor Idaho have I ever found ready-made bran muffins in supermarkets. Another CA thing, I guess.

I prefer the Kretschmar Braunschweiger. Good stuff right there. 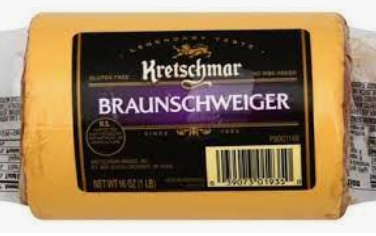 The School Shooter - Food for thought.
2