I actually saw someone reporting this on YouTube, then this article. According to the YouTube video, this happened on Saturday. Oil is currently down 3.7% so I guess investors are indifferent.

The international community is condemning Iran for launching an attack against an oil tanker, in turn, killing two members of its crew. The United States, United Kingdom and Israel all said they have proof to show Iran was behind yet another attack on an oil tanker in the Middle East.

In a statement Sunday night, U.S. Secretary of State Antony Blinken said, “we join our partners and allies in our strong condemnation of the attack against the Mercer Street, a commercial ship that was peacefully transiting through the North Arabian Sea in international waters.”

On Thursday, the Mercer Street was attacked with what has been determined to be one-way explosive unmanned aerial vehicles. However, Iran has denied any involvement.

“We see these distractions every once in a while, especially when good things are happening in the region,” stated Iranian Foreign Ministry spokesperson Saeed Khatibzadeh. “I have stated this once and I will repeat it, the regime occupying Jerusalem has brought with it insecurity, violence, terror and war wherever it has gone. And for this reason, those responsible are those who have brought this regime to the region.”

Meanwhile, British Foreign Secretary Dominic Raab called the attack “unlawful and callous” as well as “deliberate, targeted and a clear violation of international law.” Both have said their respective countries are reviewing possible response scenarios, but the strongest condemnation came from Israeli Prime Minister Naftali Bennet.

During a cabinet meeting Sunday, Bennett said Iran will be held to account for allegedly carrying out a drone attack on the tanker. The prime minister added, Israeli Intelligence has the proof of Iran’s involvement in that attack. Bennett also said Iran’s behavior poses a danger to global maritime trade.

“I just heard that Iran, in a cowardly manner, is trying to shirk its responsibility for the incident,” stated the Israeli prime minister. “They are denying it, so I determine unequivocally: Iran is the one that carried out the attack on the ship. Iran’s bully manners are dangerous, not only to Israel, but also harm global interests, the Freedom of Navigation and international trade.”

Bennett stressed Israel would deliver a response to Iran for its actions in its “own way.”

The international community is condemning Iran for launching an attack against an oil tanker, in turn, killing two members of its crew. The United States, United Kingdom and Israel all said they have proof to show Iran was behind yet another attack on an oil tanker in the Middle East.

Here's some more going down. Thank you Biden for the lack luster and weak stance on Iran, what's he going to do, give them billions more.

It wasn’t immediately clear what was happening off the coast of Fujairah in the Gulf of Oman.

The vessels — oil tankers called Queen Ematha, the Golden Brilliant, Jag Pooja and Abyss — announced around the same time via their Automatic Identification System trackers that they were “not under command,” according to MarineTraffic.com. That typically means a vessel has lost power and can no longer steer.

A ship has been hijacked by Iranian forces off the coast of the United Arab Emirates' Fujairah region on Tuesday, according to sources.

Two of the sources identified the vessel as the Panama-flagged asphalt/bitumen tanker Asphalt Princess in an area in the Arabian Sea leading to the Strait of Hormuz, through which about a fifth of the world's oil seaborne oil exports flow.

British sources are 'working on the assumption Iranian military or proxies boarded the vessel', the Times newspaper reported.

The British military's United Kingdom Maritime Trade Operations (UKMTO) initially warned ships Tuesday that 'an incident is currently underway' off the coast of Fujairah. Hours later, they said the incident was a 'potential hijack.'

They did not elaborate on the unfolding incident. but The Times defence editor tweeted: 'British sources believe Asphalt Princess has been hijacked. They are working on the assumption Iranian military or proxies have boarded vessel.'

Iran's foreign ministry said reports of security incidents involving several ships near the UAE coast on Tuesday were 'suspicious' and warned against any effort to create a 'false atmosphere' against Tehran.

It comes just days after a deadly drone attack on an Israeli-managed oil tanker in the Gulf of Oman which Britain and the US have blamed on Tehran. 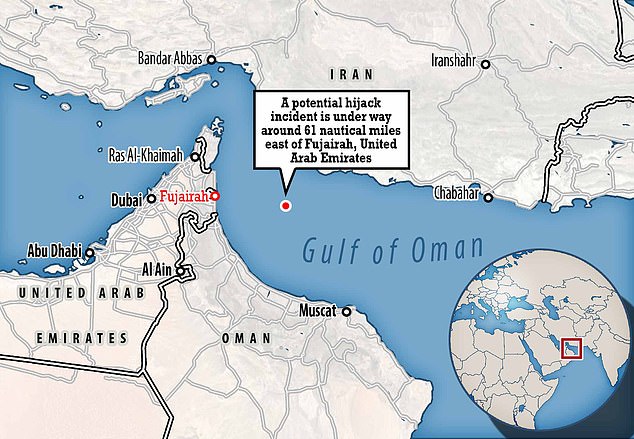 A non-piracy incident is under way around 61 nautical miles east of Fujairah, United Arab Emirates, according to the United Kingdom Maritime Trade Operations. The area in the Arabian Sea leads to the Strait of Hormuz, through which about a fifth of the world's seaborne oil exports flow 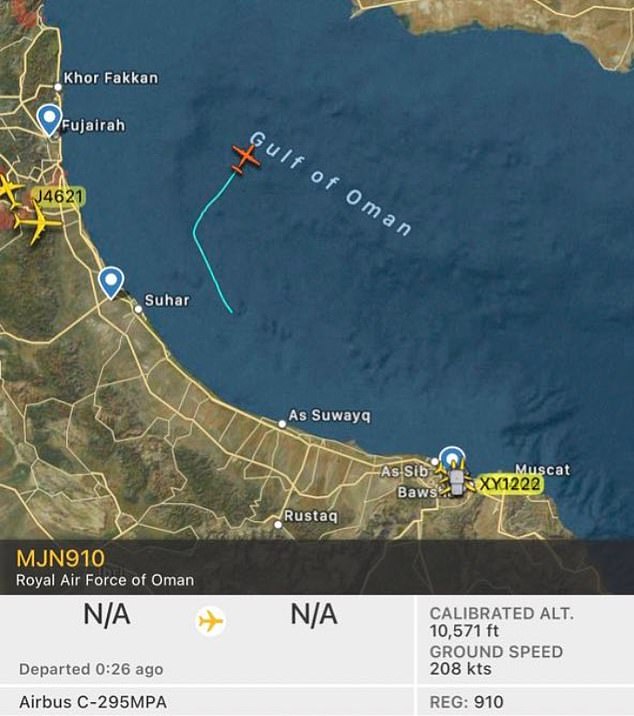 An Oman Royal Air Force Airbus C-295MPA, a maritime patrol aircraft, was flying over the area where the ships were, according to data from FlightRadar24.com
An earlier United Kingdom Marine Trade Operations (UKMTO) warning, based on a third party source, initially reported a 'non piracy' incident on the unnamed ship. It did not give details on the vessel or vessels involved.

The agency earlier advised vessels to exercise extreme caution in the area, around 61 nautical miles east of the Emirati port city of Fujairah.

On Tuesday afternoon at least five ships in the sea between the UAE and Iran updated their AIS tracking status to 'Not Under Command', according to Refinitiv ship tracking data.

That typically means a vessel has lost power and can no longer steer.

Four of these ships were reported by the Associated Press as Queen Ematha, Golden Brilliant, Jag Pooja and Abyss. Reuters could not confirm this Refinitiv data had any connection to the reported incident.

According to Sky News' foreign affairs editor Deborah Haynes: 'The vessel that appears to have been seized is the Asphalt Princess. 'It was an unauthorised boarding in the Gulf of Oman,' the security source said. A group of 8 or 9 armed individuals are believed to have boarded the tanker,' she wrote on Twitter.

In a further tweet, Ms Haynes wrote that while it was unclear who 'boarded the vessel or why', one source told her 'there's presumed to be an Iran leak. Another source cautioned it's not clear,' she added.

Later, many of the ships were shown to have their engines back up and running and it remains unclear which vessel or vessels were involved in the incident.

An Oman Royal Air Force Airbus C-295MPA, a maritime patrol aircraft, was flying over the area where the ships were, according to data from FlightRadar24.com.

The U.S. Navy's Fifth Fleet, which is based in Bahrain, did not immediately respond to a Reuters news agency request for comment.

'Iran's naval forces are ready for help and rescue in the region,' Khatibzadeh said.

On Thursday night, a kamikaze drone laden with explosives crashed into the bridge of the Mercer Street tanker off the coast of Oman, killing a British Army veteran working as a security guard and a Romanian crew member.

The attack was swiftly condemned by Israel, followed by the US and Britain, who blamed Tehran for the strike.

Iran denied involvement in that suspected drone attack and said on Monday it would respond promptly to any threat against its security.

The United States and Britain said on Sunday they would work with their allies to respond to the attack on the Mercer Street, a Liberian-flagged, Japanese-owned petroleum product tanker managed by Israeli-owned Zodiac Maritime.

Tensions have increased in Gulf waters and between Iran and Israel since 2018, when then U.S. President Donald Trump ditched Tehran's 2015 nuclear deal with six world powers and reimposed sanctions that have crippled Iran's economy.

On Monday, Washington promised to lead a 'collective response' against Tehran, with US Secretary of State Antony Blinken calling the MT Mercer Street incident 'a direct threat to freedom of navigation and commerce'.

One image shows a huge gaping hole in the top deck of the vessel while another shows the main mast (pictured) which appears to be blackened from a blast. Neither images could be independently verified
Meanwhile, UK Prime Minister Boris Johnson told MailOnline that 'Iran should face up to the consequences of what they've done', while adding that it was 'clearly an unacceptable and outrageous attack on commercial shipping'.

In response, Tehran said any move against the national security of Iran will 'face a tough and firm response', while adding that Washington and London will be 'directly responsible for its consequences'.

Iran 'will not hesitate to protect its security and national interests, and will immediately and decisively respond to any possible adventurism,' foreign ministry spokesman Saeed Khatibzadeh said.

The Gulf of Oman is near the Strait of Hormuz, the narrow mouth of the Persian Gulf through which a fifth of all oil passes.

Fujairah, on the UAE's eastern coast, is a main port in the region for ships to take on new oil cargo, pick up supplies or trade out crew.

Since 2019, the waters off Fujairah have seen a series of explosions and hijackings. The U.S. Navy blamed Iran for a series of limpet mine attacks on vessels that damaged tankers.

Also in 2019, Iran seized the British-flagged Stena Impero on July 19 in the Strait of Hormuz as it was headed from the Iranian port of Bandar Abbas to Dubai.

The raid came after authorities in Gibraltar, a British overseas territory, seized an Iranian supertanker carrying $130 million in crude oil on suspicion it was breaking European Union sanctions by taking the oil to Syria. Both vessels were later released.

In July of last year, an oil tanker sought by the U.S. over allegedly circumventing sanctions on Iran was hijacked off the Emirati coast, following months of tensions between Iran and the U.S.

The vessel and its crew ended up in Iran, though Tehran never acknowledged the incident.

Their puny drones are no match for Israel's nukes....they should keep that in mind.

4 ships in Gulf of Oman lose control, days after vessel attacked by drones