Well, we had a decent turnout and a lot of fun. I didn't take as many pics as I should have, but make sure you get the chance to come to one of these events in the future. I'll post up the pics that came out half-way decent anyway. One of the best is the pic of the targets of our little informal 10 yards one-shot competition. The target was a 1-inch Red Bullseye.

We had two groups shoot, then the winners of each group had a shoot off for the Grand Champeenship. In the first group, HFS (Hick From the Sticks) nailed it dead center! A 1-inch bull at 10 yards and he drilled it! Then in the second group,. Matt Giroux claimed first place being 0.18" off the bull. Dang good shooting! So we pit these two deadeyes against each other:
Our man HFS shot a 0.13" inch off center. I mean it was close! Matt shot a dead center bull on this round though, and was declared the overall winner! Both of these guys are deadly shooters. (Do your best to avoid a gunfight with either one).

Matt was shooting a suppressed S&W Victory .22LR, and HFS chose to do battle with my Two-Tone West German Walther
PPK/S in .22LR. I was impressed with Matt's shooting for sure, but I stand in awe of HFS using my stock PPK/S to do as well as he did. Holy Moley!

It was a good, fun day for all at the range, then we descended on Del Rancho for the eatin' part. I sat across from HFS, and his eatin' was darn near as impressive as his shootin'! I kept my fingers away from his plate and that's no lie!

First pic is Xseler; he is a known desperado and those two deadeyes should count their blessings that he went easy on 'em. 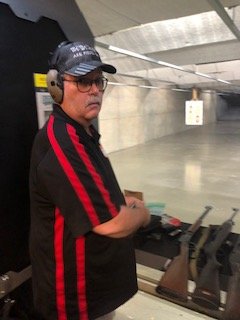 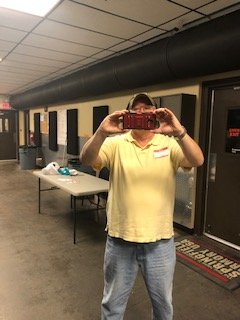 Next is a photo of Jimmy, Matt, and Gun Dog. A handsome fellow indeed. 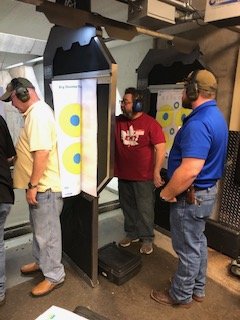 As shot of HFS blazin' away from the back; I damned sure wasn't going to be anywhere near his line of sight. 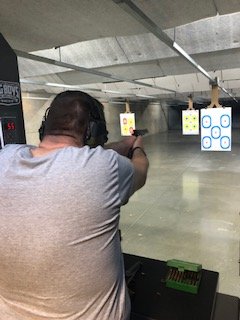 This was at TEN YARDS and a ONE-INCH Bull! Darned sure was a good show of shooting skills on both their parts! 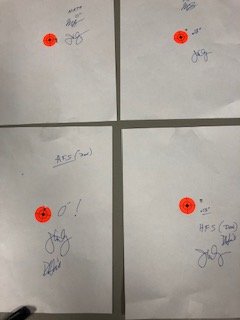 I did better in this phase, the EAT part. Here's us chowing down at Del Rancho afterwards. I couldn't help but notice all the Hot Chicks checkin' us out there too. The guy in the light yellow shirt on the left is ChadH20...notice how his cheeks are all puffed out? I think he ate that gigantic chicken fry in two bites!

Let it be noted that @druryj consumed all gravy at del rancho. Yes, ALL!

El Pablo said:
Let it be noted that @druryj consumed all gravy at del rancho. Yes, ALL!
Click to expand...

Rats! I've been found out! I plead guilty as charged.

Looks like ya'll had a heck of a good time. Thanks for the pictures.

druryj said:
Rats! I've been found out! I plead guilty as charged.
Click to expand...

Think @HFS was flirting with the waitress. She kept just bringing him food he didn’t order.
H

Good to meet everybody!

Wish I could have been there. You set one up at an outdoor range and I will try to be there.

Thank you to those who put it all together. Well Done!

Great pic's....I plan on coming to the next ENS. Can't wait to meet everyone.

Glad you guys had a good time. Looking at the pics I'm not sure if which part you guys enjoyed more, the eatin or the chootin..

FedEx Shooting in Indy, what would you have done?