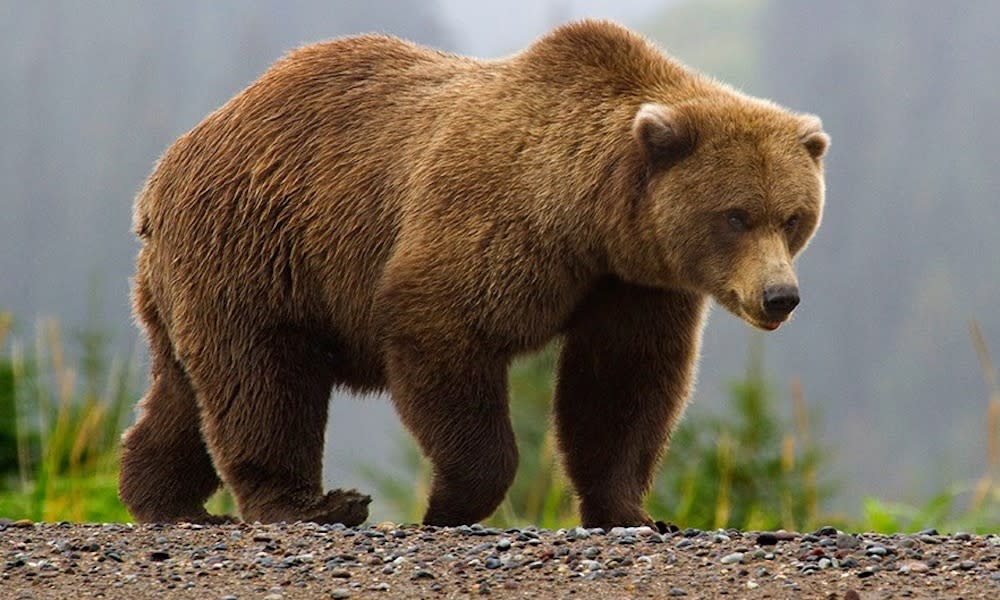 Man being attacked by bear yells at coworker, ‘Shoot it, shoot it!’

An Alaskan fisheries tech had just completed a stream survey when a brown bear charged out of the brush and attacked in a harrowing encounter.

An Alaskan Fish and Game fisheries technician had just completed a routine stream survey with two others when a brown bear came charging out of the brush and attacked him in a harrowing encounter on Chichagof Island north of Sitka.
Jess Coltharp, who has worked surveying salmon streams for Fish and Game for 14 seasons, was with coworker Anthony Walloch and volunteer Ethan Christianson on a trail heading back to the boat around 5 p.m. on Aug. 19 when the attack occurred, as reported by KTOO.

Coltharp, 31, was on the trail ahead of the others when he turned to address them.
“I remember looking over my shoulder, and I was saying something to them when I kind of heard the bushes crashing, and that’s when I looked up and looked over toward [where] the sound was coming from,” he told KTOO. “I couldn’t even really see it all at first because the brush was pretty thick, but about 20 feet away…this bear comes charging out of the brush at full speed.”

He told Snopes that the bear came “flying out of the thick of the salmonberry brush” and was “way too quick to do anything about it.”
Coltharp told KTOO the bear gave no warning at all. He grabbed his shotgun from a sling on his back and attempted to load the chamber, but he didn’t have time. He jumped to the side to get his upper body and head out of the way, hoping his armed partner could get in a clean shot.
“And that’s when the bear reached down and just kind of chomped me right above my kneecap,” Coltharp told KTOO. “And [the bear] was just shaking me around by my leg. I was just laying there as it’s got me, just yelling, ‘Shoot it, shoot it, shoot it, shoot it!’ as fast as I could say it.”
Also on FTW Outdoors: Bison with calf doesn’t take kindly to woman getting too close
Walloch, standing 15 feet behind Coltharp when the attack occurred, obliged.
“I had my shotgun up, and then just like, in a second I was like, this is the safest shot I’m going to have,” Walloch told KTOO. “I took one shot, the bear rolled right off of Jess. And then I pumped two more shots into the bear just to make sure that it wasn’t going to get back up.”
With the first gunshot, Coltharp immediately felt the bear release him. A moment later, he stood up and looked at Anthony.
“He’s like ‘Heck of a shot, buddy!’ And at that moment when he said that, I was like, that made me feel a little calmer in that situation,” Walloch told KTOO. “Knowing that Jess, he could still talk to me, and everything seemed all right.”

In addition to both going through emergency response training, Walloch had EMT training from the Sitka Fire Department, and Coltharp credits all that training for keeping a bad situation from becoming worse.
They put a tourniquet above the leg wound and called their boss via a satellite phone. Preparations were made to send a float plane to pick them up where they’d left their boat about a half-mile away.
With his adrenaline pumping, Coltharp managed to hike the half mile to the pick-up point. Within two hours, he was in the emergency room at Mt. Edgecumbe Medical Center. Fortunately, the bear didn’t break any bones, damage any ligaments or strike any major arteries, but it did leave a huge gash in his leg. He eventually underwent surgery and is currenting facing weeks of recovery and physical therapy.
“Anthony’s never gonna have to buy a drink around me ever again,” Coltharp told KTOO. “I definitely owe that guy a lot. So he’ll be reaping the benefits of that for a while.”
Photos of generic brown bears of Alaska courtesy of the National Park Service and Wikipedia Commons.

Betcha he chambers a round before going in the woods next time.
O

Snattlerake said:
Betcha he chambers a round before going in the woods next time.
Click to expand...

How can one be do dumb?

Walking in bear country without a round in the chamber is totally stupid. I read about a lot of bear attacks before heading to Montana for this summer's trip.
At best you have 4 seconds, and your likely to still get mauled even if the bear is shot before it expires unless it's a CNS shot that puts it down immediately.

Range time with a 4 year old
2