NikatKimber said:
The idea is to keep it for a while. I've owned my current 1990 F150 for 13 years, and only put 12k miles on it. I don't drive trucks much, so this probably would stay for a while. Once out on land I'd probably use it more, I'll have a tractor and other stuff to drag around; but it still wouldn't be a daily driver.
Click to expand...

While it will not be a daily driver, it will likely be our vacation rig after the house is done. We usually do a 3-5 thousand mile trip once a year, plus various other uses, so 6k a year is probably reasonable. I don’t know if renting for that much use is reasonable.
Last edited: May 7, 2021
O

This is kinda like Charades it has been fun, but not real fun. I am out. Good luck!

Oklahomabassin said:
This is kinda like Charades it has been fun, but not real fun. I am out. Good luck!
Click to expand...

I have a 2015 F-350, 4 door with the 6.7 that I would sell you. Only has 65,000 RANCH miles on it. 4x4, custom package, 1 bullet hole in the bottom of driver side back door, 1 bullet hole in back seat floor board, cracked windshield, dents in all 4 doors and was used to hunt coyotes with my greyhounds a couple of winters. Best thing about it is the radio is good and the speakers are loud enough to drown out any mystery noise that you thought you may have heard.


Sent from my iPad using Tapatalk
B

This is OCFD's before decals and being equipped. They now have 12 similar to this, the most 10 recent being identical. Only have 300 gallon tanks though. Alpha One is out of Duncan, and the most recent 10 being gassers due to the problems they have had with the DEF systems on the Powerstrokes. Some self inflicted. 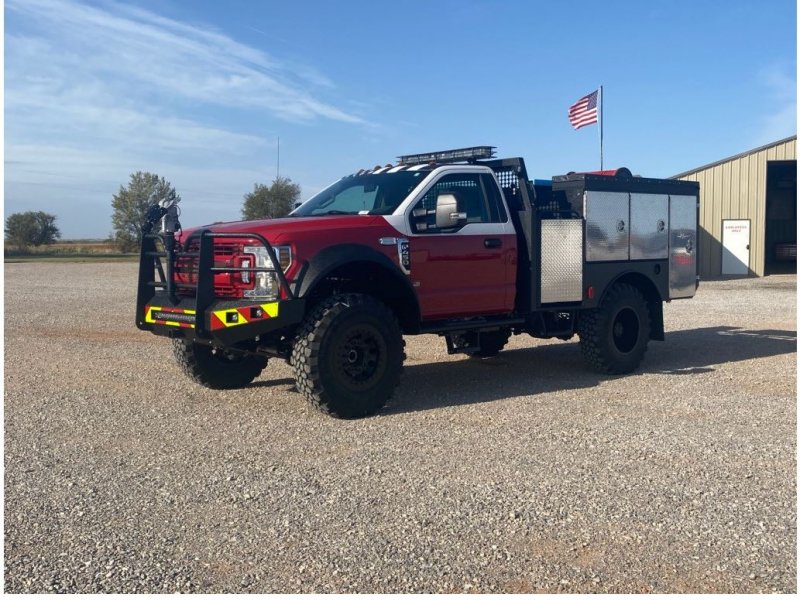 I have an 04 F-350 4x4 SRW crew cab Lariet, that has been the best truck I've ever owned and the only one I've kept for 11 years and put 150k on. It has the 6.0 diesel and in the first 2 years I had to put injectors in it but have never had any of the problems with head gaskets. I think a lot of that is from people putting programmers on them and hot rodding the hell out of them. I've never even had a problem with the a/c. I pull a 25ft gooseneck flatbed on occasion and it does great, has 3.73 gears and the automatic transmission. I had 2 V-10 Ford's and they both sucked, one in an Excursion and the other in a dually. Got terrible fuel mileage and had no guts when I pulled, had to keep my foot in it and the rpm's built up. I just bought a 13 Ram 3500 last year with the 6.7 Cummins and it has the automatic with 3.42 gears and I pulled a pretty heavy trailer last weekend with it and it turned 1600 rpm's at 68 mph and I got almost 14 mpg. Thats what 800lbs of torque will do vs. a gas motor. I bought the Ram because I got a great deal and I'm glad I did, those small V8's are just no fun to drive pulling a heavy load, my friend bought a 3500 SRW Chevy with the 6.0 gas in it and it doesn't pull worth a damn in my opinion, I rode out to Amarillo with him pulling an empty 25ft enclosed car hauler and it was constantly turning 3500-4000 rpm and getting 6 or 7 mpg. I know I'll never go back to a gas motor again, Diesel's cost more but there worth it to me. Plus a gas 3/4 or 1- ton is pretty hard to sell if you ever plan on it.

Resale value is something I should probably consider. If I keep it for 10 years and only put 5k/yr on it, a diesel would still be worth something even if I buy something with 150k-200k already.

Gas vs Diesel is probably going to come down to maintenance cost/complexity of diesel vs higher fuel cost and depreciation of the gasser.
R

The prices are just crazy now on trucks I've seen a lot of really high mileage diesel pickups they want 30-40 grand for, I'm talking 150k plus miles on them.