Guns are just too expensive these days to have sloppy writing on them.

Many new firearms these days look sloppy in cosmetic appearance. This is especially true for metal finishes and stamped markings in gun metal. Most older-production guns looked so much nicer like the builders took pride in their workmanship.

Commercial manufacturing sloppiness is also true on many other consumer products these days from air conditioners to lawn mowers.

One can often tell that there is no more pride by the way people generally dress these days too. People aren't as generally well-groomed anymore. The last well-bred human generation seems to be the generation X'ers that follow boomers like me.

People don't speak and act as proper as they used to and most dogs have better manners than most children and many young adults.

Consumer products therefore reflect the quality (or lack thereof) of the people that build them. It's all about being lazy, corporate greed and taking as much money as possible from the consumer and giving as little as possible in return.

The following is a comparison picture of two Mossberg 500 receiver underside markings side by side. One a current-production model and one a vintage model. Which one looks much neater and more legible than the other? The camera was in focus on the right-hand picture with the flash turned off under a bright desk overhead light so you can see what it looks like to the naked human eye.

The camera was in focus according to the indicator in the viewfinder. Camera was in close-up mode. Flash was turned off intentionally. Lighting was a 64-watt overhead florescent fixture. The image will look sharper with flash on but naked human eyes don't normally observe things with constant camera flash on. Here is a shot with flash but some of the markings still don't register clearly. 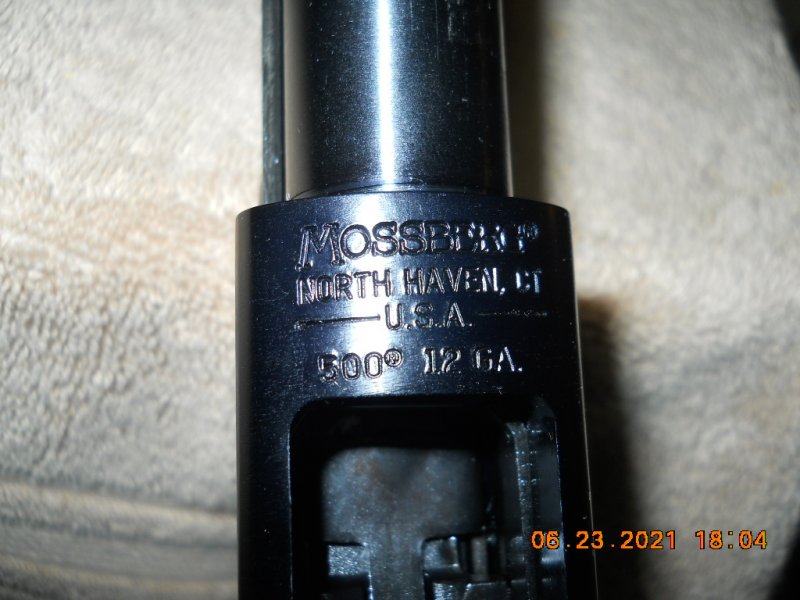 Just for comparison, look how clean, crisp and legible the markings are on this dark blue Colt Trooper barrel below. That Colt was built when American gun makers were proud of their workmanship. 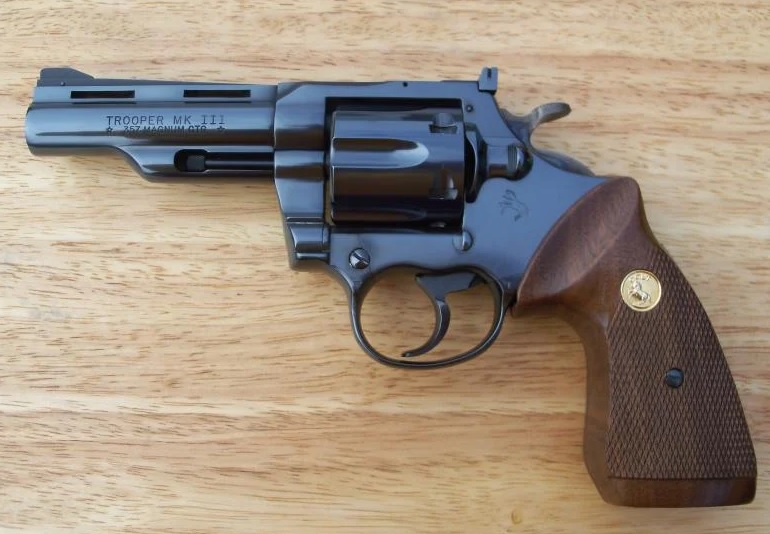 So, therefore I'm now on the market for a pre-owned older (1990's maybe) Mossberg 500 shotgun with the older markings I like much better. The inferior markings on the current-production Mossy 500 is a deal breaker to me. I have had two brand-new Mossys I purchased new in the 1990's. A new 500 in 1995 and a new 590 in 1999. The 500 got stolen in a home burglary and I had to sell the 590 in 2004 when money was tight. Dammit, what I'd give to have either of those guns back again in mint condition they way I kept them. They had the nice crisp and legible receiver markings with the big M in Mossberg and the rest of the trademark in lower-case letters. Some corporate money-grubbing young punks must have taken charge of Mossberg management since the 1990's. Fine craftsmanship is a long-lost and unappreciated art form. Product manufacturers have largely lost pride and work ethics. In my gun collection efforts, I'm looking toward seeking older models in preowned condition with that finer workmanship.

I now have a 2005-model Remington 890 Express 12-g. police pump with pretty decent finish and markings. I want a nice older Mossy as a hunting shotgun. My Remmy has magazine extension, orange follower, no plug and barrel clamp. 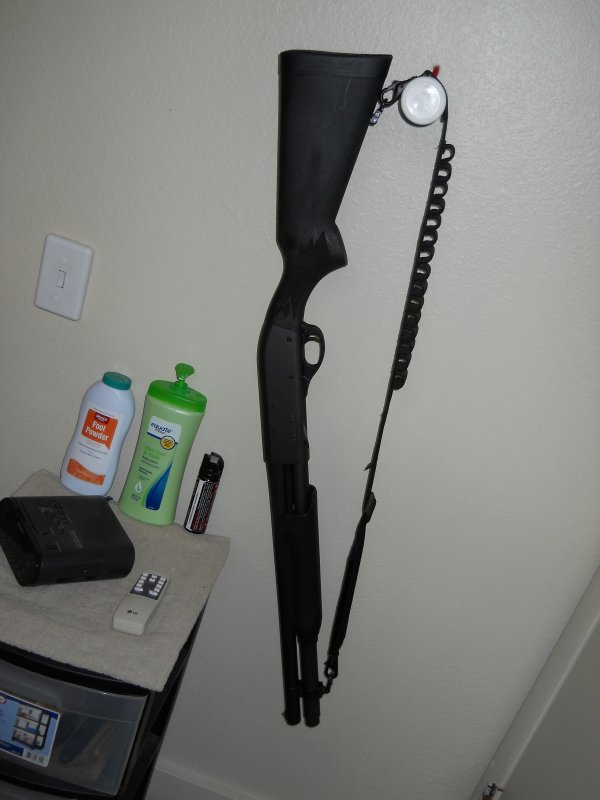 The only thing that really gets me with markings on fire arms is when they put it in a place I don’t want to see it on a gun. Like all the lawyer filed warnings and all that BS. All I want to see is the make the maker and caliber.

Stopped at “Mossy”. F all that nonsense. Use your words correctly and beautifully.

Mass production in the shortest time = lack of QC and cosmetics.

It's not just the markings my friend. Its the whole dang gun. Just work the bolt and safety on the full lineup of bolt action rifles at the LCS.

Then work the bolt and safety on a pre 64 model 70 or an old Weatherby Mark V and you will just leave. I won't even buy most of these pieces of junk myself.

I'm with you, it is appalling what passes for a quality firearm these days. With few exceptions, I do my best not to buy anything made after 1995 or so. A few years ago, I found a brand new stainless Mini Thirty with walnut stock on the shelf when they had been on backorder for months. It looked fine on the rack and a quick once-over in the store. After getting it home and taking a closer look, toolmarks left on the barrel and receiver, poor fitment around the wood, metal and wood shavings that somehow got through QC. I sold it the next day without firing a shot. My older 189-series looks like a museum piece by comparison. Sure there are some modern advancements in materials and some manufacturing methods that are better and more reliable, a few design enhancements here and there, but by and large, they don't make 'em like they used to, and never will again sadly.
My biggest pet peeve with recently manufactured arms is anything with a .com after it plastered on the barrel. Don't know how to shoot? Get on the internet. Broke a plastic part that used to be metal in the old ones? Get on our website and we'll sell you a new one, might as well get two, it'll break again.

I definitely must try to find a pre-2000 Mossberg 500 in primo condition. It never was an expensive gun but I was very satisfied with the looks, feel and shooting of my two former 1990's-vintage Mossys. My 2005-vintage Remington 870 is my home defender. I would designate the older Mossy as a hunting gun for all seasons: one fowl barrel for dove and a scoped cantilever rifled slug barrel for deer. I don't like camo hunting guns either: just plain matte or blue. I'm sure a good older Mossy 500 can't be too hard to run into in a local pawn/gun shop.

The other day, I asked Mossberg by email about when the older-style MOSSBERG stamping I favor was discontinued. The corporate responder wasn't sure but said "most likely" around the mid-2000's. If I tell potential sellers I want a pre-2000, then I should get the gun specification I seek having owned two 1990's-built ones already.

I also seek one of two vintage wood-stocked hunting rifles in top shape:

"They don't build them like they used to...."
Grab a new S&W revolver. Once you get past the stupid lock, the hand/ratchet interface is TERRIBLE. It takes me an hour or two just to fix that on a new gun that has never been fired.

I just bought a new Smith 686 PLUS. The lock doesn't get in the way, the trigger is nice but the stock finish is not what I expected from Smith & Wesson on a $900 revolver. I have seen new Smith stainless revolvers, including a Model 619 .357, with satin finish that were just primo back around 2005 at gun bars in stores for under $500. Smith wants another $170 to bead-blast my gun plus S&H to get that nice satin finish. I just called them and their factory bead-blasting equipment supposedly down now. Gun makers these days like many other products manufacturers are just profit-greedy. Common guns at modest prices, even American brands, decades ago still had pretty nice cosmetics. Older craftsmen took pride in their work. Take a look at how nice the dark royal bluing looks and how sharp the barrel markings look in that, I believe pre-1980's, Colt Trooper revolver above. That's a prime example of workmanship I crave.