Fired up the pot Saturday

Running short of projectiles for the Military Bolt-gun Match, so I went down in the barn- 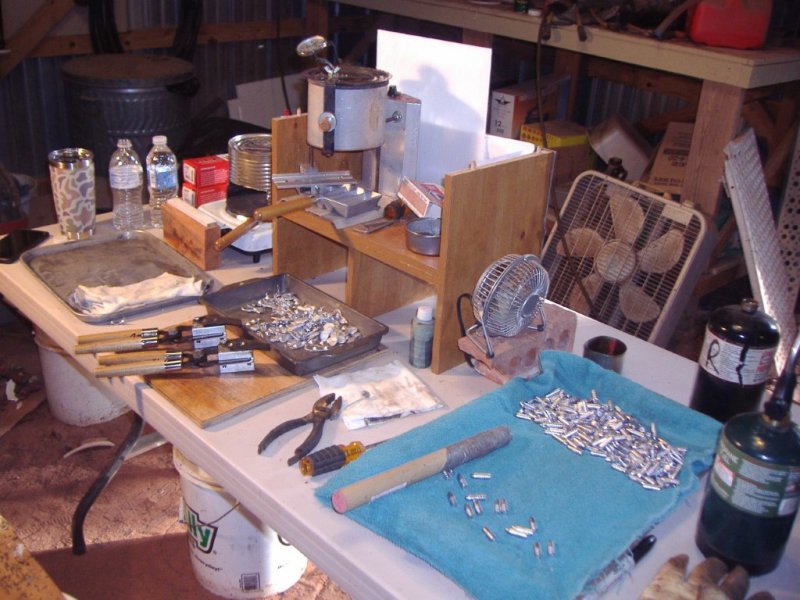 This is the third or 4th time I've cast this particular bullet. I'm using clipon wheelweigts (CWW) with a bit of added tin. The biggest problem I had was that the itty-bitty Lee mold block was overheating.
Solution - use 2 !

After several fills, they both start heating up, I swipe the bottom on a wet rag, seen to the left of the wood rest, betwixt the coffee cup and the moulds.
It's working well, and I have under $40 in both. And, I used a gift card....

Then, a new M-P mould (from Slovenia)- 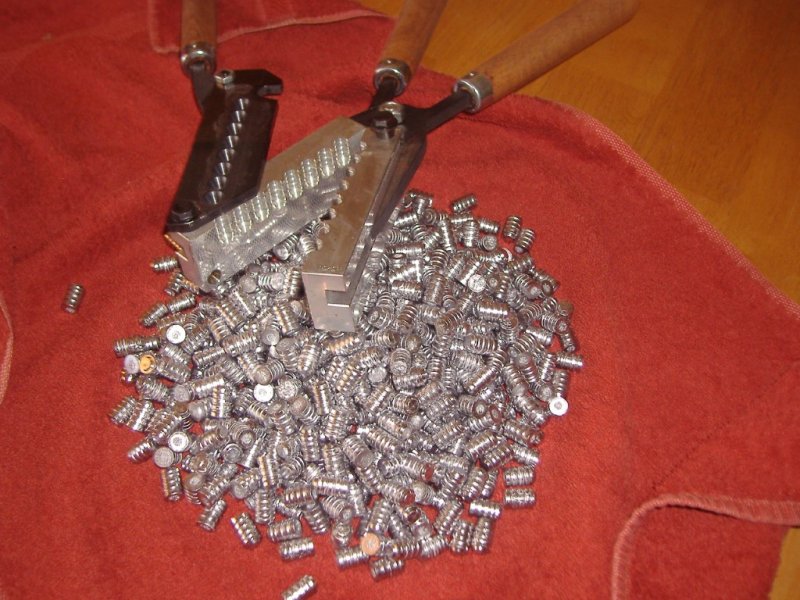 Supposed to throw a .360 dia wadcutter, I haven't measured yet. I will say that the sprues are YUGE ! The mould itself is beautiful. I even splurged and bought his handles; I want this mould to be a set I keep.

Two problems with it - first, I think I need to add some more tin to help the fill-out.

Second, that giant mould block, with the relatively small bullets, I'm having trouble getting and keeping the mould up to temp. I pre-heated on a hotplate, but can't get it hot enough.
I finally jacked up the pot temp, when it got up to 750° it got better.

I don't like to cast that hot, the tin starts oxidizing out of the alloy. I don't know the cure, but it is the first time I've cast with it, maybe it'll get better with time.

The title threw me a bit. I’m thinking ‘I didn’t think Paul was into the whole pot thing’

Me too! Lol I fired up the pot yesterday also but it was at the Wal Mart restroom after eating at Los Vaqueros
D

I quit doing that stuff before alot of the members here were born...

Lol, I just figured it was chili or stew weather...

Very nice and the mary jane thing never came to my mind until I read the comments.
I figured it was a lead bullet making session.

I had a mold that would not fill out because of the very long skinny bullets.
I ended up using a propane torch to heat all around it and it worked well.
Once up to temp if you kept on trucking it stayed there.

I do not have a hot plate..Most of my molds get set on top of the lee melting pot as soon as i turn it on.
I see you have the propane torch.

I also cool my molds on a wet towel when they start getting hot.

I thought you wanted the molds to get hot for ease of removing the cast and to prevent heat shock.
D

Well, the moulds need to be at a certain temp range.

Too cold, the bullet wrinkles and won't fill out. Not only that, it's usually too small also.

As the mould heats up, the bullets go from wrinkled, to shiney, to frosted.
Frosted looking is okay in my book, usually as big as the bullet will get, and well filled out.

When the mould gets too hot, among other problems, the bullet will stick in the mould, necessitating more convincing with the mould mallet to fall out.

Excess heat will damage the mould, possibly warping it, or causing the line up pins to move in the mould block.

There's a sweet spot, different with each individual mould, in which the bullets drop freely and all is right with the world.

The trick is finding that temp range, and keeping it.

D
Casting in the barn