So I'm not a "pistol guy" which I know is kind of a dumb term, but they have just never motivated me
to spend time and money on them. I haven't carried outside the home much in the last few years, between
the plague and working from home to start with, I don't get out a hell of a lot. But anyway,
my 20 year old Glock 22 that I've had for like, 12 or 13 years is annoying to even halfass try to
conceal. I carried it open plenty and it's fine for that, and I love a full size handgun like Peter loved
the Lord, but it just ain't workin at this stage in my life.

Canik TP9SF Elite, I like "different" things, and I'm really leaning toward
one of these. Though I think they are selling for more than they are worth, or
maybe they were underpriced to start with.

Taurus G3C. I'm pretty impressed from the reviews and such on this thing, especially
for the money. The last time I paid any attention to pistols Taurus didn't have an
awesome reputation but they seem to have made progress. The price seems about
what I'd expect to pay for a decent little 9, unlike everyone else's offerings.

Beretta APX Compact, the reviews are all pretty good for this and it's
cool just via being a Beretta and having been part of the whole mil pistol
trials thing. I'm not sold on the funky slide cuts working all that well but
it seems to work overall.

I know the default answer is G19 but that's kinda boringly guaranteed to be
perfectly okay.


Any screaming red flags about any of these I've missed?
Anything else I should be looking at?

I know holster compatibility is a thing with some of the less
popular ones, and I generally prefer an owb retention like
a 578 Safariland, but hopefully with something slightly smaller
than the foot long 2x4 my G22 is I can experiment some.

Give the FN509 a look too. I sold my Midsize as I'm in love with my compact and never carried the mid. The size difference isn't much and it conceals well.

Springfield XD Subcompact 40.
Been my CCW for 12 years. 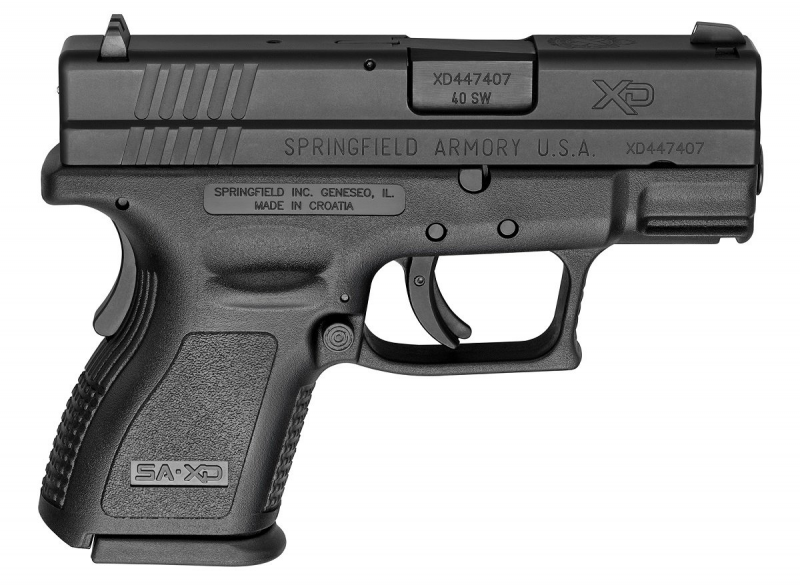 It has a loaded chamber indicator and a cocked indicator so no press checking is necessary.

This one is a low capacity for alla youse Commiefornians.

The XD® 3" Sub-Compact .40 SW Low Capacity is the perfect carry gun for locales with magazine restrictions. Combining .40-caliber power with a respectable 10-round capacity, this gun is easy to pack and comfortable to run. An ambidextrous magazine catch and Ultra Safety Assurance Trigger System keep this pistol running quickly, safely and well. Dual recoil springs and a full-length guide rod put those .40-caliber rounds right on target.

If your looking for the perfect pocket pistol, the Sig P-938 is right up there. 1911 clone at 1/4 the size. 7 rounds total, but you can get an extended magazine for one more.
What the OP is going to find is that there is going to be zero consensus of opinion about what is the best. He is going to get a lot of personal opinions generated by those that have owned their personal choice.
It does give options though.

Sub compact Sig Sauer P365. The trigger out of the box is excellent and gets better with repeated use. IMO

I agree with @dennishoddy everyone is different, look at all these responses.