Peter1861 said:
And, a shorter one: I was in a desert area, mesas and the like. It was a town abandoned during the Dust Bowl, way out in the middle of nowhere, but a few ranches clung on for some time.
I went through a ranch home that made it to around 2005, judging from some magazines.
Shirts were still in the closet, food still in the refrigerator, and family photos and film all over the floor. The pack rats had not been kind to the place.
I walked around the corrals outside, with a squeaking wind mill.
My friend, waiting at the car, started to walk over from where it was parked a hundred feet or more away. I met him and we turned back to the car.
I asked why he came over, and he says he heard me talking with somebody, that there were voices. It was daytime, incredibly quiet and only a very faint breeze. I suspected it was the wind mill, but he was adament. He firmly denies the existence of spirits or even God.
I never felt anything in that house except supreme sorrow for that persons memory, with their belongings and photos there. Nothing ever felt out of place, and I treated the place with extreme respect. If I ever opened my mouth at all it was to whisper something to myself.
Another story that won’t blow your socks off, but it’s important to me. That house is in my thoughts often. I’d like to find some living relatives and ask if they’d take the photos. I don’t know how I feel about removing anything on my own, even if it is of the purest intentions. Looking at photos of people smiling with their kids, or out on vacation, it’s a hard thing to leave to the ravages of time. Any thoughts?
Click to expand...

I would take the photos, pick one that shows several people clearly, post it on FB asking if anyone recognizes the people. Say you want to get the photos back to the family if you can. If nothing turns up, donate them to a historical society in the area.

Peter1861 said:
I don’t want to give out any specifics, sorry. I’m kind of protective like that.
Click to expand...

no problem. If it was from up in the Panahandle I live here and know a lot of people.
O

I was not born yet, but this is a story my Mom told.

Mom and Dad had a dog named Danny.

Danny was a smaller dog. Dad would play ball with Danny. The dog was prettey talented!

One day (evening I think while my Dad was working afternoon turn) Danny was lying on a chair.

Mom said the dog got thrown off the chair like someone knocked it off!
O

Mrs Pistolpete worked at an estate sale near Prague recently. The house has been unoccupied several years. Wife in assisted living. Husband deceased. During the setup two of the workers were visited and griped at by an old man one afternoon. He told them to leave his stuff along and get off his property. The old man was led away by a younger man saying “ let the ladies do their job”. Photos of both men were found in the obits of the local funeral home. Mrs Pistolpete and another woman were working in the garage and kept hearing, “leave my stuff alone! Go away! You don’t belong here!” Both heard the voice but there was no one in the house. From looking at his stuff the old guy was a little on the hoarder side and probably pretty attached to his stuff. The only thing I saw when I worked there was the lights kept going off and on in the attic. Kinda creeped me out so I stopped looking up there. This isn’t the first time weird things have happened before and during an estate sale. There was a home in Midwest City we called the Blair Witch house...

I live in the house that my Granddad moved from the farm to town, in 1940.
I was babysitting my 4yo grandson. He was playing in the back bedroom. I could here him talking and laughing. He says, "bye" and walks into the living room.
I asked what he had been doing? He told me he was playing with his friend that lived in the closet.
We were the only ones home. So, I asked "who is your friend?"
He points to the picture on the wall of my Uncle, who was killed in a car wreck in 1963. Born in '39, that was his bedroom.

Grandson is now 21. He told his girlfriend about this friend that used to live in the closet.

I have a great ghost story. Probably the best.
And unlike these other ones on this thread, it actually happened.

It was about 1992-3, a couple years after that huge movie “Ghost” with Demi Moore and Patrick Swayze came out.
I was bar hopping at a western Illinois college town with some buddies. We walk into this one bar and who do we see playing pool in the back?
The bad guy Ghost, Rick Aviles, (pic attached). He’s a stand up comic and must have been playing one of the other bigger club/bars in town.
So, being the smartass I am, I put my jacket over my head, raise my arms as high as I can, then wail/screech very loudly,
“REEEEEEEEEEEEAAAAHHHHH!!”
walking towards him.
As you may remember in the movie; if you’re a bad guy and you die, you don’t get to go to heaven and be a ghost, you get grabbed by wailing demons and dragged to hell.
The latter of which I was portraying in the bar, and was a bad re-enactment of what eventually happened to his character’s fate in the movie.
He saw me and gave zero reaction other than a “haha, very funny” in his very recognizable raspy voice. I’m sure he’s gotten razzed by drunkards like that before since that movie.

My friends and I had a great laugh, and were rolling on the floor laughing before that acronym was even invented. 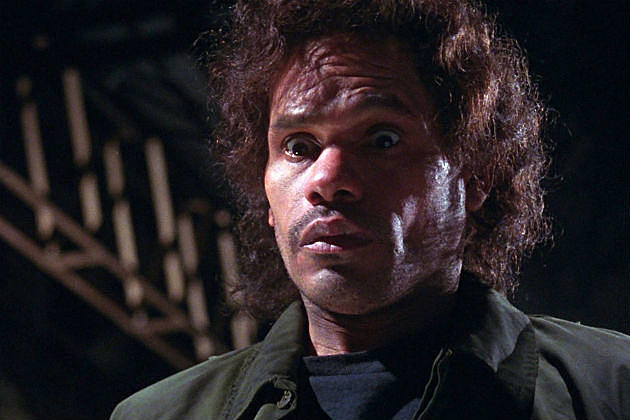 Oh yeah, he died of aids a year or so after that, so maybe he saw em again one last time, who knows?

The last house we had in the Seattle area sure gave us the creeps. Things would turn up missibng and/or moved from where we had left them, and we would hear noises like pots and pans falling.

I won't say for certain that ghosts were involved, howwever we heard that the house had perhaps been built over an Indian burial ground, and I do wonder.

I hardly ever tell this story but here goes. While at Fort Sill waiting in line at the MP chow hall I had arrived late because I had been busy. I am the last one in line and just standing there listening to the radio on the cafe speakers.

There was an announcement of an army helicopter crash at Fort Benning overnight. They then read off the names of all the souls on board who were killed. When they got to Mike Warehime I felt a strong hand on top of my right shoulder. Turning around, I got freezing chills because there was no one behind me!

Mike and I performed ROTC hand-to-hand combat demonstrations at high schools a year before this. I know he was telling me it was alright, he was OK with what happened.