For the last several years I've been searching for a nice 9mm carbine. For most of that time one critical criterion was Glock magazine compatability. I briefly owned a Keltec Sub2000 but sold it to pay for another gun that I've also sold since then. When Ruger released the PC carbine I grabbed one and thought I'd found my ideal PCC, but for some reason I just never liked it. I think it was the combination of weight and overall length that just didn't match up with my notion of a PCC.

After selling the Ruger, I decided to be a little more flexible with magazine requirements. That of course led me to the CZ Scorpion. I own a P-01 which I love, so the Scorpion was a logical choice. While trying to narrow down my choice between carbine, pistol and the new Micro, I ran across a relatively new offering from Grand Power. Grand Power is a small company in Slovakia that has been producing solid handguns for about 15 years or so, and they seem to have a pretty good track record, so I started doing some research on their 9mm PCC pistol variant called the Stribog.

Immediately the Stribog began checking all of the boxes on my list of requirements. It has a polymer lower but the upper is machined from one big piece of aluminum with MLOK slots on both sides, with a continuous picatinny rail on the top and a small section on bottom which is large enough for a AFG or weapon light. One nice feature is that functional front and rear sights are integrated into the rail, and can be flipped up at anytime. All of the controls are ambidextrous, the trigger is compatible with AR triggers (with minor fitting), and it has a functional LRBHO. The charging handle is reversible and does reciprocate, but as a right handed shooter I run it on the right side and it doesn't bother me at all. Grand Power offers a back plate ($50) allowing one to install an AR receiver extension, which I used with a Tailhook brace to make the Stribog a much more functional weapon. The barrel is 8.5" long and comes threaded 1/2 x 28 and I may add a linear compensator in the future. The pistol grip is integrated into the polymer lower, but fortunately Grand Power set it at a less severe angle than the Scorpion, and I would've left it alone in any case.

It came with two 20 round magazines, and I purchased two more 20 and two 30 round mags. So far I've ran almost 200 rounds of 124 and 115 grain FMJ with zero malfunctions of any kind, and the LRBHO worked perfectly. The trigger isn't great, but I'm going to hold off on working it over until I have at least 1000 rounds through it; at about 50 yards my nephew and I were dinging 8" plates just about as fast as we could pull the trigger so it's acceptable for now. Although a small RDS would be a perfect match, I have astigmatism so I'm running one of the new Primary Arms 1x Cyclops prism scopes. It sits just a hair higher than I'd like, but otherwise it works well. I currently have an Olight PL-2 Valkyrie weapon light on the bottom pic rail, and it works well both as a light and a functional hand stop.

Overall, I am very happy so far. It's a very solid weapon with just enough heft to make it a pleasure to shoot. At around $725 out the door it is priced very competitively, and for a little more the brace adds immensely to its functionality. I will update the thread as I continue to put it through its paces, but for now I highly recommend it for anyone looking for a good alternative to the Scorpion. For those who don't like reciprocating charging handles, Grand Power says that a non-reciprocating model is on the way. 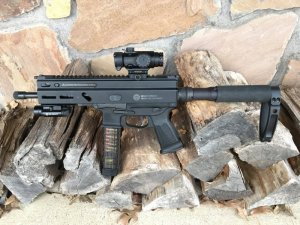 I've owned one for several months and love it.
Charge handle is not a problem for me but I'm going to move it to the other side which is my preference anyway.

There is a guy that will modify the Stribog to a non recip. charging handle.
Erie Ordnance Depot LLC I believe.
Safety Harbor has lots of cool stuff for these also.

The subgun version is becoming a huge hit with overseas military.
I believe the US Army is considering it as well.

Uncle Meat said:
I've owned one for several months and love it.
Charge handle is not a problem for me but I'l going to move it to the other side which is my preference anyway.

There is a guy that will modify the Stribog to a non recip. charging handle.
Erie Ordnance Depot LLC I believe.
Safety Harbor has lots of cool stuff for these also.

The subgun version is becoming a huge hit with overseas military.
I believe the US Army is considering it as well.


Sent from my iPhone using Tapatalk
Click to expand...

How would the Stribog compare to the Sig MPX?

Perplexed said:
How would the Stribog compare to the Sig MPX?
Click to expand...

I'm not sure.
MPX's are pretty nice.

Looked at one of these right before Christmas but ended up buying a Bren Pistol instead because it was on sale. Either way, it was hard to find a review but they seemed stout. Called the poor man's B&T. Had no idea that it was compatible with AR triggers. Thanks for the review as it will likely cost me money.
P

Since my original post, I've put 200 more rounds down range with no issues. I have installed a Kaw Valley linear compensator which seems to perform as advertised, although anyone who says it's hearing safe is being very kind. The trigger seems to be smoothing out some, but I'll probably get the itch to work on it at some point. As a right handed shooter, I have no issues running the charging handle on the right side. The bolt hold open works perfectly and the release does as well.

The only upgrade I'm looking at right now is the Safety Harbor Firearms collapsible brace, and I will be ordering it as soon as they make it available. I've read elsewhere that Grand Power will be bring a Glock compatible lower to market eventually. That's an interesting option because the upper is serialized on the Stribog; if nothing else it might be nice to have a lower which takes a common magazine, especially if the stick mags ever dry up due to import restrictions. That being said, I really do like the OEM mags and I believe an upgraded version with steel feed lips is coming soon.

Overall, I'm very pleased with the Stribog. Seems to be worth every penny, and for now I'm still highly recommending it.
P

Last week I ordered and installed a low mount for the Cyclops prism scope, and it made a huge difference. Now I can really bear down on the cheek weld, and accuracy has improved accordingly. This weekend I finally disassembled the trigger group and polished it up a bit. Pull weight didn't change much (5.25#), but it is noticeably smoother. Today I ran another 200 rounds through her without a hiccup. I had three 8" steel plates set up at 50 yards, and was pleasantly surprised at how rapidly and accurately I could transition from target to target. Follow up shots felt much smoother, and again the speed and accuracy reflected it.

I love this little gun more each time I take it to the range. In a way I wish that I'd waited for the A3 delayed blowback version, but I just don't see how it can be that substantial of an improvement over the A1. Still highly recommended.
P

So far this weekend I've put another 200 rounds through the Stribog. Still not a single malfunction since bringing her home from the FFL!

I've been waiting for Safety Harbor Firearms to release their collapsible stock, but for the last few days I've been ogling the new Sig folding MPX stock. It attaches to a 1913 endplate, which SHF offers for the Stribog, and it's a very sleek design. I like the fact that it can be mounted at different heights on the endplate to give the user options for cheek weld height. That's a significant advantage over the collapsible stock, which is mounted pretty high relative to the picatinny top rail on the Stribog upper receiver. My only issue with the Sig brace is that it's not fixed in place; the rubber brace section rotates on the "beam" which extends out from the endplate. That has led me to look at the SB Tactical FS 1913 brace. The FS 1913 isn't quite as sleek as the Sig brace, but it looks pretty solid and doesn't have that goofy pivoting "feature".

Anybody here have experience with collapsible vs. folding stocks/braces on PCCs? I'm kind of torn right now. Either way it's going to cost me around $250, and I'd prefer not to spend that much twice. Thanks!

Free Bakelite AKM mags? On the ground? Count me in!

Anybody enter the Classic Firearms giveaways? Ever win anything?
2