By now, many forum users have noticed my avatar, but as I recollect none have ever asked me anything about it. That in itself is amazing, and I realize many, perhaps, have been afraid to venture any words to convey their wonderment. Still, others may have not needed to inquire any further. That being said, I will try to elaborate as to how the picture came to be.

Now this ain't no crap, and I don't know if it will gain acceptance to the reader, so I will simply pass along the story that has been handed down in my family.

The man shown in the photo was my great-grandpa from my Momma's side of the family. His name was Durwood. As a mere lad, Durwood followed his family along what is now known as the “trail of tears” from their home lands of Georgia. The forced move resulted from being “ethnically cleansed” by their white neighbors and the white man’s government in order to claim the fertile fields and gold laden hills of the Cherokee Nation. Other ancestors, on my Daddy’s side followed from Georgia, to Tennessee, to Missouri, and on down into the Nations after sherman marched through Georgia on way to the coast.

Great-grandpa Durwood lost several family members along that damned trail they traveled upon. Consequently, he had grown up tough, bitter, and untrusting of many since the trail of tears where he had seen things one shouldn't have to see if the Country had really been civilized rather than savage. He soon lived a solitary life, secluded to himself, east of the Mountain Fork River in what would later become McCurtain County.

Being the lone individual he was, Durwood survived in the hills and backwoods with a supposedly fine pack of hunting hounds for companionship. He provided for his own needs, and life for him was all he expected it to be. It would later be told of many white men going missing within that part of the Nations.

Family members would see Durwood on occasion, usually before the rains set in or around Christmas time if the Winter travel allowed. They came to expect one visit a year from the family member from the tall hills, acknowledging the fact he was still alive if for no other reason.

In the early summer of 1903 or 1904, the family became somewhat worried concerning Durwood. It had been fourteen months without a visit, and soon after another two months had passed, thereby prompting Durwood's younger brother, Daniel, to plan a trip to his brother's home.


Daniel’s journey would require four or five days of hard trail on horseback, guided only by copied directions he had written down from a past conversation with Durwood. He would have to travel in the back way through Arkansas due to the rivers being unable to safely cross on horseback at that time of year.

A few days later, Daniel had reached the ridge above the small valley where Durwood called home. From the remote vantage point, he could see his brother's one room cabin below. All was quiet within the valley, no dog's barking, no wildlife, no birds, not an apparent sound of any kind could he hear.

As he drew nearer, Daniel became aware of scattered canine bones around the area of the cabin, evidently the remains of Durwood's hunting hounds. He also could plainly see the cabin had been damaged from a break-in of some sorts, its window's shattered, its door ripped from the hinges and a post knocked out from under the roof covering the porch.

Just off the cabin's porch, he found the remains of a smaller man, dismembered and left in a pile of bleached broken bones. A quick inspection within the cabin revealed its worldly contents of roughly hewn furniture had been placed in a way as if to bar entrance from the windows and doorway. Yet still, there was to be no sign of Durwood.

A search of the immediate area surrounding the cabin only revealed the rusted, shattered remains of Daniel’s prized Winchester .44/.40. It was not until Dan had reached the tree line behind the cabin that he discovered the thing he feared most to find. The skeletal remains of a human torso were twisted around a tree limb just out of Dan's reach from the ground below. He had found Durwood.

A more thorough search of items around the outside of the cabin produced a broken camera and tripod, possibly explaining the bones found earlier in the yard. Apparently, Durwood had a visitor the day or night of the incident. It was to have been the stranger's last visit to the valley.

When Dan left the valley for the last time, he packed the broken camera into his pack, hoping to find some sort of final answer as to what might have happened.

A side stop in Ft. Smith produced only one grainy glimpse onto the time prior. The only survivor of the camera's bowels provided the image you see.

You can view the image for yourself, and no, I do not know what the creature is or isn't. The man within the picture is Durwood, and that image along with this story passed down is all anyone will ever further discuss concerning the matter.

Now, as for me? I can only speculate since I was not there. I will say this, however, no one within the family ever went back into that part of the Nations. 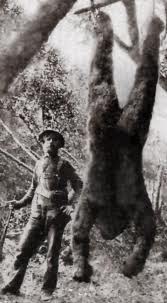 It not for the legs, and a few other things, I'd say it's a silverback gorilla. As is....Wow
Great story.

Sasquatch. I knew he existed

So the story would lead us to believe that the other primates in this area took revenge on poor Durwood. Where was this cabin located? Sounds like a great place to go squatchin’

McCurtain county is just south of Hanobia. I think that they still have the annual Bigfoot festival there.

Very good read thanks for posting

Hogwash! That's a gooorilla hanging from that tree.

Yeah...I hear gorillas are roaming the woods all over McCurtain county.

Well....whatever the cathair it is...it is big. Daniel and Durwood both stood around 6'2" so they say. I wish we could see the other side of it, so we could at least tell how messed up it was.

Can anyone tell how tall it might have stood? Do gorillas even get that tall?

Seals and Croft singer is dead…