I made one years ago but it was made from all new material including 3+ lbs of thick aluminum and square stock for handles.
Too heavy and I did not have a drill bit large enough so I wallered the hole to size with carbide bits.
It worked but poorly.

So snow days got me thinking I need a better slug.

I found a large bit that would bore a hole almost .800"

I need this new mold to cast a bullet in the .720" area.
I want a bore rider like my last mold was.
I took that drill bit and made it smaller by grinding it on the bench grinder.

I then took a Lee 2 cavity bullet mold I have had for many years and drilled a hole with my new drill bit.
I did clamp the mold together with vise grips so it would not open up when I was drilling it.

After drilling I made a steel mandrel with a slit in it to wrap sandpaper around it and sand this hole just a bit larger and smooth it up.

I got it done and cast some pure lead slugs from it.
I then sized them to .718" and powder coated them.

How did I size them?
That same drill bit was used to drill a hole into a CV axle nut I had laying around and then the sandpaper treatment took to the inside of the nut.

Finish sandpaper grit was 320 for the mold and the nut.

I made a push through sizer stem by taking a Long tipped 45 cal bullet possibly 300gr and placing it nose down into a sized 45acp case.
Then took another sized 45acp case and put it over the base of the bullet sticking up in the first case.

Now I take my #2 shell holder and slide this sizer stem into it and place a cast bullet in my sizer die (Drilled Nut).
Then place it under the single stage press hole and push it through the nut.

Works like a lee push through sizer die kind of.

I did make the nut ID at the entrance larger than in the middle of the nut so I can start the bullet evenly and or square.
This sizer has only 1/2 a thousandths of runout. I consider that a win.

Just a few grains less than 1.5 ounces when finished.

Some pictures to explain it all. 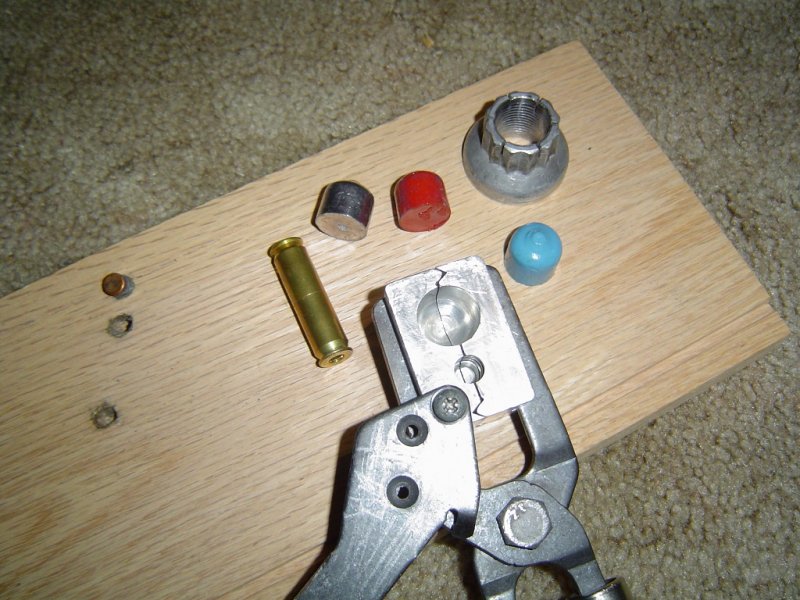 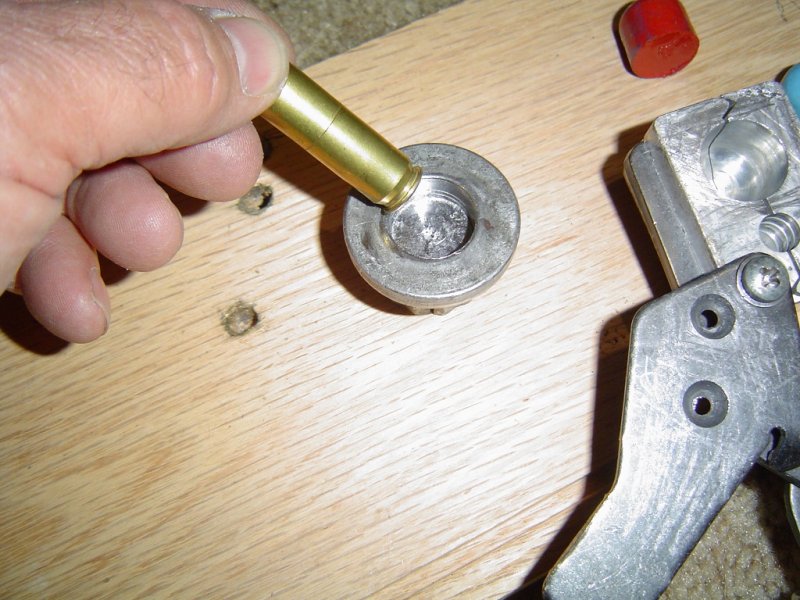 Need to load some up and test them out now.
Will be a week or so before I get to do that shooting though.
D

That 1.5 Oz is gong to be a shoulder buster.

Pretty neat! Should be pretty devastating.

No not a rifled barrel all my shotguns are smooth bore.
These slugs are pure soft lead and I did not know if they would lead the barrel or not.

I have measured a couple of my shotgun barrels and they are large at the chamber and slowly taper down and the last 3" of the barrel
near the muzzle really begin to choke down.

Now if you do not have a complete gas seal to hold that powder back it will burn on past the sides of the projectile and if it is uncoated
lead that burning powder will strip lead from the bullet.
At least that is the way it happens in a pistol barrel and you get a leaded barrel.

And I wanted a few thousandths more girth around the middle of the projectile.

Today I also got froggy and made another slug hole in another mold this tima a 6 cavity lee mold that was the .401 TC 175gr.

This one is smaller diameter and is very long and will sit in a shot wad.
I made this so the wad+ slug would ride the bore the same as the bore rider.
No powder coating on this one just cast and load.

This saboted slug looks almost like a wadcutter with a little nipple on top. And slowly tapers the top is .625" and tapers to the base of the bullet to .650"
I am curious as to how it will act.

Going to be a lot of slug shooting soon.

I shot a few of these yesterday and nothing great to say about the groups.

Except 1 potentially good advancement is when I upped my powder charge to 30gr from 28 there were 2 in the same hole (figure 8) and
one left and high by 2" from it.
This was 25 yards.
Others with lower loads shot 2 feet apart.
More testing obviously.

I knew I was at a minimum on my powder start charge but this is new to me bore rider and no real data to go by.

On a second note I have some Ranger Plus Unslit high capacity shot cups I dropped three .490" round balls into and capped the cup with
flat cork and roll crimped it.
Same 28gr load and It was amazing what happened.

I did not slit the shot cup and I used cornmeal as a filler /buffer between the .490 lead round balls.
That shot cup stuck with the lead balls and I got a single clean hole through my target at 25 yards 1" above bullseye.

I did not slit the shot cups.
I stepped back to 50 yards and got 1 clean hole 8" above the first hole.
I went to 100 yards and found I need a bigger target as I have no idea where it hit.

I may like these unslit cups with some steel shot for reaching way out.
I will make some of those up.

Man, what a great project!

Try a hollow base so that the weight balance is more forward.