I will not comply!


Sparks fly at assault-weapons ban hearing on Capitol Hill, ex-cop vows she would 'not comply'
Ronn Blitzer4 hours ago 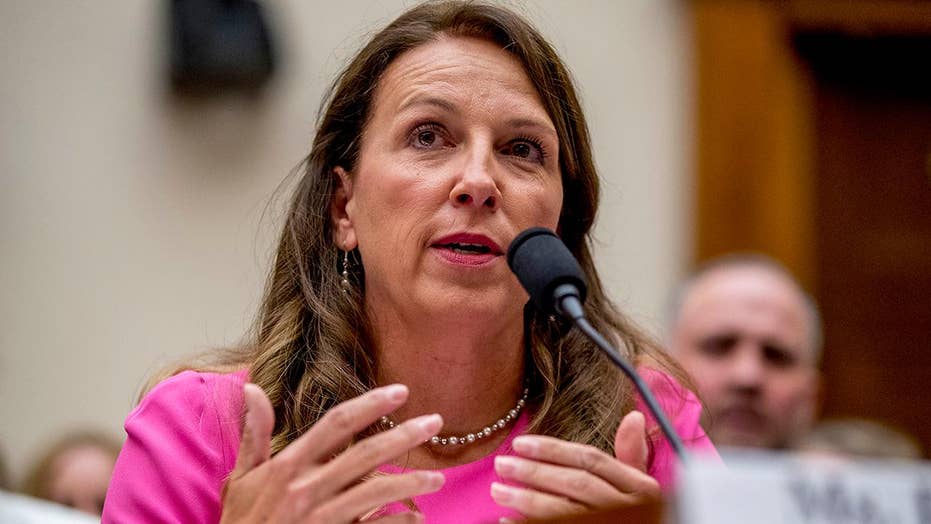 Video
A former police officer made a bold proclamation during a congressional hearing Wednesday regarding a proposed assault-weapons ban: she would not comply.

Dianna Muller, who served in the Tulsa Police Department for 22 years and is the founder of gun advocacy group The DC Project, was among the witnesses at the House Judiciary Committee hearing. The session on an otherwise contentious issue flew largely under the radar amid the Trump-Ukraine controversy and Democrats' impeachment push. But reflecting the gun control divide in the country -- amid a spate of deadly mass shootings that prompted renewed calls for strict laws -- Muller said that such a ban would force lawful gun owners to either give up their arms or become criminals.

"Please don't legislate the 150 million people just like me into being criminals. It has happened. You've already done it," Muller said, referring to the Trump administration's ban on bump stocks, the devices that use a semi-automatic weapon's recoil to make it rapidly fire like an automatic. "I was a bump stock owner, and I had to make a decision: do I become a felon, or do I comply?"

Should the government pass an assault-weapons ban, Muller declared, "I will not comply."

Muller and others at the hearing focused on the practicality of a ban, pointing out what they claimed were mainly "cosmetic" differences between weapons such as the AR-15 and standard semi-automatic hunting rifles. This issue was also raised by Heritage Foundation senior legal policy analyst Amy Swearer when Rep.Jim Sensenbrenner, R-Wis., went down the line of witnesses asking if they believed hunting rifles should be banned if they are semi-automatic.

Swearer said no, stating that there was no difference in the mechanics or function of an "assault weapon" or a semi-automatic hunting rifle. Dayton, Ohio Mayor Nan Whaley, who recalled the recent mass shooting in her city, did not give a definitive answer to Sensenbrenner's question, nor did Dr. Alejandro Rios Tovar, a trauma surgeon who treated victims of the attack in El Paso, Texas. Charlottesville, Va., Chief of Police RaShall Brackney indicated she was in favor of a ban on "any weapon that could be used to hunt individuals."

Rep. David Cicilline, D-R.I., countered the idea of a hunting rifle ban by referring to his assault-weapon ban bill. Cicilline said that more than 200 weapons are exempt from the bill, so there is really no issue of eliminating hunting rifles.

Swearer also testified against the idea that law-abiding citizens have no need for weapons like AR-15s, recalling how her mother, a gun novice, had difficulty accurately firing a handgun at a shooting range, but was much more effective when she used an AR-15.

"As I read the Second Amendment, it doesn't say the right to bear arms shall not be infringed unless the gun has scary features," Rep. Jim Jordan, R-Ohio, said.

Swearer also noted that some features like barrel shrouds enhance the safety of a weapon for its user. But David Chipman, senior policy adviser at the Giffords Law Center, raised a counterpoint noting that a barrel shroud could allow a shooter to get a better grip on a weapon "in a way that would increase your ability to spray fire and kill more people" without burning their hand.

One feature that was a concern for House Judiciary Chairman Jerrold Nadler, D-N.Y., is the ability for some weapons to be used with high-capacity magazines that allow users to fire dozens of rounds without reloading.

Kristen Rand, legislative director of the Violence Policy Center, testified in agreement with Nadler that a ban on such magazines, along with a clear definition of "assault weapon" that would eliminate loopholes under the 1994 crime law, would be effective.

Congress and the Trump administration have been in talks for weeks regarding possible gun legislation, but discussion of taking away guns that are currently legal has led to criticism from both parties. After 2020 Democratic hopeful Beto O'Rourke declared during a debate, "Hell yes, we are going to take your AR-15, AK-47," Cicilline said, "That message doesn't help." President Trump said that O'Rourke was making it "much harder" to reach a deal on gun legislation with that sort of rhetoric.

22.5K people are talking about this

Trump's focus when it comes to gun control has mainly been on background checks. The White House was also circulating a one-page document on Capitol Hill detailing a possible gun background-check proposal that would require private sellers – not just licensed vendors – to conduct background checks for all advertised sales, though Attorney General Bill Barr said Trump has not yet made a “firm decision” on what he ultimately will support.

But the Democrats' impeachment push could complicate matters. House Speaker Nancy Pelosi, who had resisted impeachment, announced Tuesday that an impeachment inquiry would be launched. Reflecting how policy debates could take a back seat, Pelosi said in private meetings with lawmakers that Trump called her to discuss gun legislation, but she soon changed the subject to his phone call with the Ukrainian president in which they discussed investigating Joe Biden, which stoked the latest calls for impeachment

Mentioned in this post is Charlottsville, VA chief of police Brackney.

Here are her qualifications to tell you she is after "any weapon that could be used to hunt individuals."

Prior to her appointment as the Chief of Police for Charlottesville, Virginia, Dr. RaShall M. Brackney retired as a 30-year veteran from the Pittsburgh Bureau of Police and served as the former Chief of Police of the George Washington University. During her tenure as a law enforcement professional, she has been responsible for overseeing critical operations to include Administrations, Patrol Operations and Investigations. Most notably, she was the first African American female in the nation to oversee a Special Operations Division which included SWAT, Mounted Patrol, Accident Investigation, Hostage Negotiations, River Rescue, Traffic and the “Bomb” Squad.

Dr. Brackney is a recognized expert in the areas of harm reduction, procedural and restorative justice practices, and community-police relations. Due to her work in these areas, Dr. Brackney was selected by the Department of Justice to address biased-based and hate crimes reporting challenges in the nation. In addition, she was selected by the Divided Community Project to join their Steering Committee, and the Vera Institute to serve on their national Steering Committee for Policing Programs. Additionally, as a result of her work in social and racial justice, Dr. Brackney was granted a fellowship to Carnegie-Mellon University’s, Institute for Politics and Strategy where she specializes in the influence of race on politics and policy.

Dr. Brackney earned Bachelors and Masters Degrees from Carnegie-Mellon University and a Ph.D. from Robert Morris University. Additionally, she has earned numerous professional certifications to include the Command Institute for Police Executives and the Police Executive Research Forum. Dr. Brackney is also a graduate of the FBI National Academy in Quantico, Virginia; the United States Secret Service Dignitary Protection course in Washington, D.C.; Redstone Arsenal “Bomb School” for managers in Huntsville, Alabama and Leadership Pittsburgh XIX.

Looks like all she does is pad her resume' I'll bet she has not done any street time.

SlugSlinger said:
From a Tulsan.

Charlottesville, Va., Chief of Police RaShall Brackney indicated she was in favor of a ban on "any weapon that could be used to hunt individuals."
Click to expand...

Well, that statement eliminated every weapon on earth. Guns, knives, clubs, rocks, sticks, and so on. How can someone so "educated" be so ignorant?

i just saw a blip of her presentation on FOX news. Sent her an email to [email protected] asking how to donate to her expenses. She is making the effort to help us, I feel like I need to do a little. kudos to her.

dennishoddy said:
Well, that statement eliminated every weapon on earth. Guns, knives, clubs, rocks, sticks, and so on. How can someone so "educated" be so ignorant?
Click to expand...

You forgot fists and feet.

And, in today’s society of overwhelmingly abundant snowflakes, hundreds of thousands of words.

Looks to me that she got a lots of radical qualifications. I bet a dollar that she is a democrat.

Ha! I didn’t even recognize her without a in her hand

R
Biden uses Sacramento shooting to push gun control agenda: 'We must do more than mourn; we must act'
2 3 4