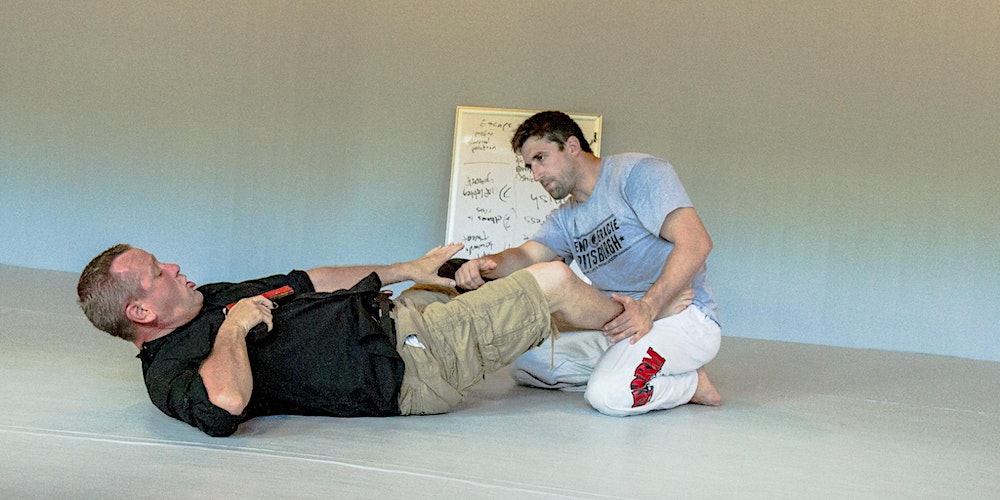 Contrary to popular belief, many empty hand fights and those involving weapons, end up entangled, either standing or on the ground. No amount of pontificating or self-proclaimed “expert” posturing will change this simple fact. If you ignore this reality, you may very well find yourself in a situation you cannot handle with disastrous consequences. This course is designed to give the layman a realistic and functional set of concepts, techniques, methodologies, training drills and experiences that will prepare them for a worst case grappling scenario. All techniques and concepts are high percentile applications which span a wide spectrum of confrontations. Training consists of presentation, drilling and Force-On-Force evolutions providing attendees with immediate feedback regarding the efficacy of the skills learned. The goal of this course is not to create a “ground fighter” or grappler. The objective is to provide attendees who have limited training time and resources with solid ground survival and escape fundamentals geared toward the increasingly violent weapon based environments they may live, work and/or travel within. And all techniques/concepts are from Brazilian Jiu-Jitsu, Wrestling, and Boxing and are combat proven over the past 80 years by thousands and thousands of practitioners, including the U.S. Army.

• These methods are for everyone regardless of physical condition – young, old, male, female, athlete or not – You DO NOT have to be a professional fighter to perform at a functional level. This will be a class about physical training, but it is NOT boot camp. Participants may go at the pace that is comfortable for them, while trying to push the envelope of their own individual performance.

• Requirements: loose, comfortable but durable clothes, mouthpiece, cup, notebook, and an open mind. Boxing or MMA gloves are strongly encouraged, but are not mandatory. Blue Guns and matched holsters, and training knives are a good idea, but there will be loaners available.

Getting back to your feet / staying upright

Defending against strikes on the ground or clinch

Dealing with the sucker punch/ambush

Fundamentals of the clinch

Structuring and balancing your training for a real world lifestyle

Since this is Cecil's first time in the Oklahoma City area and at MeadHall Range the class will be at an introductory rate of $300. This is an ideal way to get introduced to Cecil, to MeadHall, and to get some of the best training available in this sphere from a world class instructor.

MeadHall does have a kitchen if you want to bring your lunch. If you don't wish to there is a convenience store with a deli within 5 minutes of the facility and a Subway and a Sonic within 10 minutes or so. Please make sure you have any snacks, specific drinks, or other items you might personally need with you when you arrive.

Cecil Burch has been training functional Martial Arts for over forty years. He has studied many different arts and systems and has held numerous teaching credentials in a number of them, including multiple Filipino, Indonesian, modern eclectic street fighting/combatives arts, and many of the combat sports.

While he got his first training in Brazilian Jiu-jitsu in 1989 and spent time at Rickson Gracie’s gym in 1993, he began a dedicated study in 1994 with Megaton Dias. Cecil is currently a 3rd degree black belt under Megaton and has competed extensively, including the 2015 Pan-American Championships (silver medal – black belt), 2013 Masters World Championships (bronze medal as black belt), etc.

Cecil has also been a firearms enthusiast all his life. He went through his first NRA course at the age of twelve, and shot competitive skeet leagues. In 1987 he took the General Pistol class at Gunsite under Jeff Cooper and Louis Awerbuck, and he has trained extensively with SouthNarc in multiple classes (including assisting Craig in many of them), Larry Vickers, Mike Pannone, Ernest Langdon, Tom Givens, and Pat McNamara, among others. He has also competed in many different types of firearm competitions.

Cecil has travelled extensively and conducted seminars across the U.S. as well as internationally and has been a featured presenter at many tactical/defense oriented conferences including many times at Rangemaster Polite Society Conference and has worked extensively with Law Enforcement officers, Federal Air Marshals, military special operation troops, and private citizens on the functional utilization of Brazilian Jiu-jitsu, boxing, and clinch work in close quarters combat and how they can be integrated with a weapons based environment that is typical for self-defense

What it's like to spend 125 days flying the U-2, according to the only active-duty pilot to ever do it
2 3