old John said:
I have had the gut feelng something drastic is about to happen! I have had this feeling the last couple of years during all this craziness, I hope I'm wrong! My mother could literally predict things before they happened, I have witnessed this many times. In 1944 my father was in combat in Germany, my mother and older brother, a baby my father had never seen, were spending the night with her parents, in Arkansas. She awoke at 3:00 am. and knew dad had been shot! She woke everyone else up, and of course they told her it was just a dream. A few days later she received a telegram that dad had been wounded, and was in route to a military hospital in Texas. When he was able to have a leave and came home, they compared the date and time of her dream, and his being wounded, and given the time zone differences, they matched perfectly!
Click to expand...

I've mentioned it before in a previous post that I [also] 'feel' that something major is going to happen in the not too distant future. Maybe a massive supply chain failure, an epic infrastructure cyber-attack, another foreign conflict, or a government meltdown . . . I don't know, but something! To that end I've expanded my preps a bit and dropped a little further under-the-radar (grey man).

I live south of Will Rogers and when the lawn darts come up from Texas to play they make their turns back to the north right over my house. Those little suckers are quick and loud!

leemozoid said:
I live south of Will Rogers and when the lawn darts come up from Texas to play they make their turns back to the north right over my house. Those little suckers are quick and loud!
Click to expand...

Same as the ones from Vance over my house LOOT81 was doing touch n goes at Will Rogers then boogied back to Vance.

Just got back from mountain bike riding at Draper trails and there were fighters buzzing around for a couple hours, usually they fly by and are gone. Not sure what they were, couldn't see through the trees but I do know they were NOT F-16's, I know the rumble they make.
J

XYZ said:
A little off topic but thought it was interesting. The other day when Facebook went down about a half hour later I saw something I’d never seen before. Two AWACs flying next to each other heading south. I seen one every now and then often, but don’t recall seeing two next to each other. My first thought was ‘Oh crap it’s going down!’

Saw an entire squadron in formation back in the 1970s, they flew over my school.

I remember as a kid while driving my red tractor being buzzed by two F-4 Phantoms. I swear they targeted me because it was red. Scared the peewaddlin out of me! 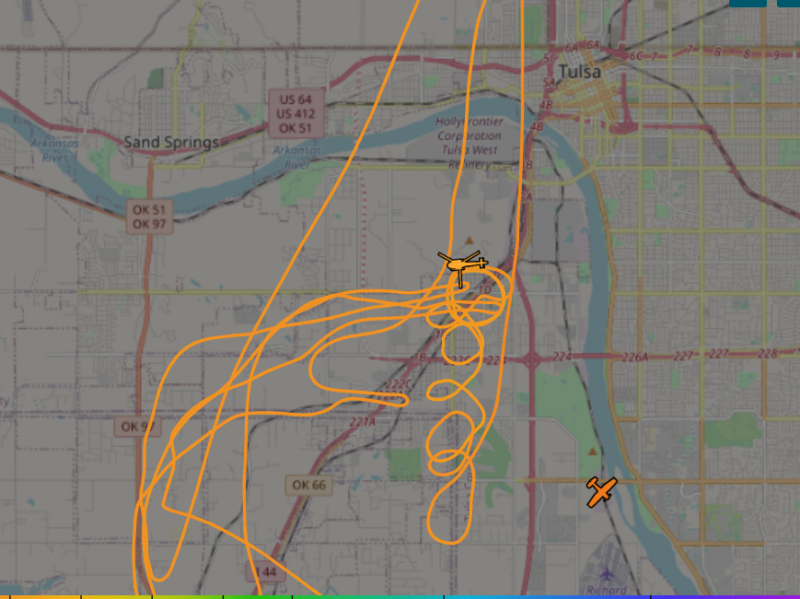 GeneW said:
You can go to ADSB Exchange dot com. Then move the map to cover Tulsa. Then you will see icons of planes flying. Touch your mouse onto, or click on, the airplane icon. Then you can read what kind of plane it is and who it belongs to. For civilian and commercial planes it will show you the Nnumber. You can take that Nnumber (tail number) and go to the FAA website and plug that into the registration search block and it will tell you more about it.

Right now, 1:27 AM, there are only 2 aircraft flying over/around Tulsa. Looks like a City of Tulsa helicopter, I assume Police. The other is a 47 year old crapbox freight hauler.
Click to expand...

Very cool link! Saw a 1996 EMB-120 ER was in the air over our place right now. Went outside and could see the marker lights!

Remember the talk of the black helicopters during Obama’s term?
I saw them doing crazy maneuvers over housing additions. There was plenty of space to do that crap elsewhere.

Watched a B52 this afternoon up by the Great Lakes. It came from N Dakota.