A while back I asked OSA whom y'all would trust to laser engrave knifes, Swiss Army Knives (SAK) in particular. Many of y'all suggest Hailey Ordinance in OKC and I'm VERY glad I took y'alls advice.

I contacted Mr. Stephen Hailey and he took the time to describe the process in depth over the phone, and the various lasers he could use to do the work. I eventually set up an appointment to visit him at his shop on Exchange Avenue in OKC.

My wife accompanied me and Mr. Hailey was very welcoming when we arrived. He apologized profusely as he told us he was going to have to start a little late on my knife as he was waiting on one of his employees to return from the store with a SAK that he can practice on BEFORE he engraved on mine.

He gave us a complete tour of his shop and all that he can do as it comes to manufacturing AR lowers, parts, and even suppressors!

Once the employee returned, he set the engraver and showed me and my wife how it works and made several practice runs to get the power and frequency just right. Once we agreed what would look the best on my SAK handle plastic, he quadrupled checked the position, spelling, and settings before he engraved my SAK.

I hope the picture below does Mr. Hailey's work Justice. He did a wonderful job on my knife. It was a birthday present from my two children, and the SAK model they bought me is discontinued now, as such he wanted to make sure nothing went wrong during the process.

When the job was complete, he billed me only 10 DOLLARS for his work, which is what he told me it would be over the phone when we first talked. I absolutely refused to pay the amount, as the amount of time and diligence he put into my knife did not warrant that amount.

I told him to bill me 25 dollars instead. To this, Mr. Hailey seemed perplexed and stated that was NOT the amount he quoted me. I explained that I was so impressed that not only had he allowed me to stay in the shop and watch/learn from him during the whole process, but the extreme attention to detail he showed my SAK to ensure it was perfect and just like I wanted it warranted more than double his initial quote.

He did tell me he saved all the settings so if others want similar work done it will be exponentially faster in the future. Then he proceeded to thank me for being patient and allowing him the time to get everything right.

I can wholeheartedly attest to the fact that if you need metal or plastic laser engraving done, Mr. Stephen Hailey of Hailey Ordinance is THE person/company to go to, to get the work done properly. 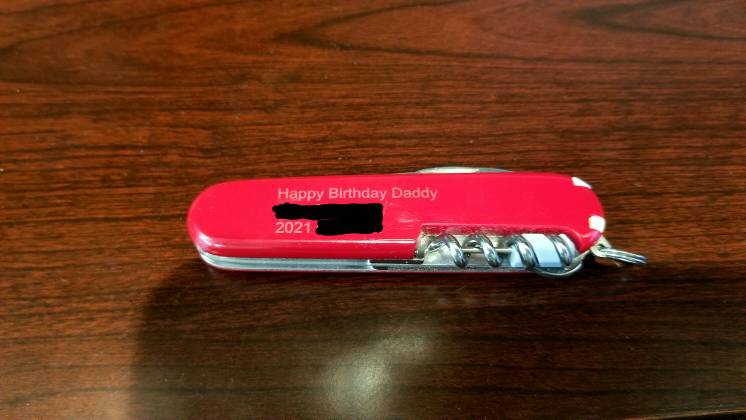 "Watch your six, count your rounds, and keep your powder dry."

Awesome! They do great work! I need to ask for the tour next time I am in the shop!

They're great except for the time I won a suppressor from them, got fingerprinted, filled out the paperwork, and then never heard from them again. Never answered my multiple emails either.

foghorn918 said:
They're great except for the time I won a suppressor from them, got fingerprinted, filled out the paperwork, and then never heard from them again. Never answered my multiple emails either.
Click to expand...

Interested in more details. Did you send money in for stamp? How long ago?

Oklahomabassin said:
Interested in more details. Did you send money in for stamp? How long ago?
Click to expand...

I'm not out any money except for fingerprint cost at the Sheriff office since it was a prize going to be donated by Hailey Ordinance. Hailey was covering all the costs of tax stamp and setting up NFA Trust. I took my fingerprint cards to him and he had me fill out the ATF & Trust paperwork. We visited, showed me the suppressor I won, he filled out his part of the paperwork w/ serial number of suppressor. Told me he'd be in contact once Feds part was approved. That was June of 2018. I guess they changed their mind about the prize donation. Maybe they never sent anything in. Don't know. Anyway crickets. I guess it's their business to do as they please.

Native off the Reservation

He has engraved all my NFA items. I won't go to anyone else.

Sent from my SM-G981V using Tapatalk