Make your own meme with meme generator

Bart, the Maine Coon, was a huge monster of a cat,,,
When I brought the kitten home as a buddy,,,
I had intended to name him something else.

But Bart took to him very well and used to carry him around the house,,,
The poor little guy always had spit-matted fur,,,
He resembled a wet hair-ball.

Chu-Toi just seemed to be appropriate.

I had the pair for nine years when Bart died last year,,,
Up to the very end (nine years together) those two were inseparable.

I took this last picture two nights before Bart died. 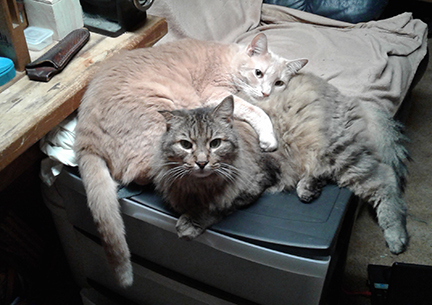 You thought fake news was bad? Deep fakes are where truth goes to die

Keep Your Head Up: How Smartphone Addiction Kills Manners and Moods