Running the 7.62×39 in the AR-15 platform has gotten somewhat of a bad rap. Read through forums and you would think people are a little bi-polar, with one post saying they could never get it to work and the next post noting they bought one off the shelf or built one and never had an issue. Kinda like people who love or hate the 300 Blackout.

Just as I was a fan of the previously cheap-to-shoot 5.45×39 round, I am a fan of the now cheap 7.62×39 round. Prices on that 5.45×39 round shot up a bit after they prevented cheap import surplus rounds, but the 7.62×39 round is still cheap and has been even through the great ammo crisis of the last ten years. I am not kidding. I could actually walk into Cabelas and buy whatever quality I wanted of $6 per 20 boxes of steel cased AK-47 rounds.

Many will say why not just use the 300 Blackout? Well, from my experience the 300 Blackout round shares many of the same functional reliability problems as the 7.62×39 round running in an AR-15 unless either caliber are well tuned. Yes, yes, I know your 300 BO rifle runs great, but mine needed tuning to run both subsonic and high velocity rounds. Then there’s the fact that the 300 Blackout is still $1.00 a round compared to $0.40 per .223 round and $0.30 per 7.62×39 round. The 300 Blackout has its place, but a working AR-15 7.62×39 upper can deliver more power for less money–you know, if you can get it working.

Major Functioning Issues Of The 7.62X39 In An AR-15
The most significant problem with the AR-15 format running AK-47 ammo has been feeding and functioning. There have been a lot of theories on what exactly is needed to make the round run in the AR-15, but usually it seems to come down to recommendations to start cutting on magazines. I don’t think magazines alone are the culprits. I wanted to see if I could figure it out for you and in the process have some fun with this awesome round.

Every possible problem I could have had with this build, I experienced. Nothing came easy. I placed an order with Delta Team Tactical for a $139 16” 7.62×39 Melonite Barrel with a Carbine length gas system and their complete $139 7.62×39 Phosphate Bolt Carrier Group. Although inexpensive and high quality products, the company could not have screwed up my order more if had been somehow intentional. A month later, I was still working through them sending me the wrong thing–again. Problems were eventually resolved.

I plugged the barrel in a Anderson Manufacturing blemished $40 upper and then used a new Parallax Tactical M-Lock forend. The only real high dollar components on the upper were a Fortis gas block and a Lantac Dragon comp to take the bite out of the heavier recoiling round. A Lucid red dot topped the upper, but it would be months before I was able to really get to using it. For the majority of testing I used my WMD Beast lower.

Getting The 7.62X39 To Work In An AR-15
Once assembled, I ran to the range, excited to function test the build. Testing centered around the inexpensive ammo, with a couple steel cased Wolf and Cabelas Herter’s 7.62×39 rounds using Magpul Pmags and some C-product 6.8 SPC mags, which some had noted would work just fine if used with just a few rounds. They didn’t.

The upper would not feed more than one round at a time and even then seemed to jam the first round on the center of the M4 feed ramp. In many cases it would not even fully extract. When the gun did cycle, it was also short stroking big time and was nowhere near approaching the point where it would lock back on the magazine. Problems? I had problems. Surprisingly the only problem I did not have was detonation. Many have noted that you need a special firing pin, but at least with this standard Mil-Spec lower trigger, there were no detonation issues.

After the first time out, I realized the gun was way, way, way under gassed, with a far too small barrel gas port hole, I also needed a dedicated AR-15 7.62×39 magazine for testing and needed some work on the barrel’s feed ramps.

Many range trips later (test, fail, tinker, and repeat), I had polished the feed ramps to a mirror finish and drilled out the barrel gas port to a huge 1/8 (.125″) size, and suddenly the gun was locking back and at least trying valiantly to pick up the next round in the magazine. Jam city, even with the C-Products dedicated 7.62×39 magazine feeding FMJ, but I really could not fault the magazine. There was more wrong here than magazine issues and what my aggressive feed ramp polish would resolve. That split feed ramp was an issue.

What I found was that most people had figured out the gas port size problem, but feeding was always an issue, and I saw only one company address it completely and that was Bushmaster. Bushmaster offered a 7.62×39 rifle, and from all accounts, it fed and functioned like a dream. The main design difference in these rifles were oversized gas ports and a single large feed ramp, which in essence removed the split between the M4 feedramps to just form one giant ramp.

This made sense because, due to the tapered case of the AK47 round. The round would angle toward the center of the feed ramp when the bolt attempted to pick it up, and guess what is in the middle. Yep, the split in the middle of the M4 feed ramps. So, I whipped out the Dremel and got to grinding away the split. Sure, I took a couple deep breaths before I basically trashed a perfectly good barrel extension, but in my mind it had to be done. It worked perfectly. In fact, now I can feed this upper with pretty much any magazine, but the C-Products dedicated 7.62×39 magazines delivered the best high capacity performance. I would expect any unmodified Stoner and ACS clone 7.62×39 magazines to deliver the same performance.

I have now put twenty full mags through this upper, running on a variety of lower receivers (including the WMD Guns Beast lower) and it has performed outstandingly. In fact, I have had zero functional issues in those 600 rounds other than the very occasional bad round, which is expected with inexpensive ammo.

Why Has Someone Not Figured This Out Before?
Well they have. Bushmaster did, but it was not very popular, leading them to discontinue it. From what I can tell, the single large feed ramp idea died with the discontinued product line. The major problems are that the gas port sizes are almost always too small for the 7.62×39 round and that the split M4 feed ramps only cause jams. If barrel manufacturers delivered a single large feed ramp and 1/8″ gas port hole in the barrel, almost all the issues would be resolved. Add in some dedicated 7.62×39 magazines and you are good to go.

If you have feeding issues, Dremel out the middle of the M4 feed ramp, and it’s likely any feeding issues you are having will disappear. If your bolt is not locking back on the last round, you probably need a larger gas port. In my case I needed to enlarge mine to 1/8″, but you might be able to get away with a smaller port, depending on your build. This process is as simple as removing the gas block and then carefully drilling out the gas port hole to a larger size. I would start smaller and slowly increase the size.

Final Thoughts
Apparently, there are many people who have been able to just buy working 7.62×39 uppers, slam in a dedicated 7.62×39 magazine, and start rocking the round, but the vast majority of folks have issues of some sort. Hopefully, my tips and modifications will allow you to build and enjoy a problem-free AR-15 7.62×39 upper and save some cash in the process as you enjoy a cheaper to shoot AK-47 round. Next up? How about a 7.62×39 AR-15 pistol build.

i've built 2 of them, one on a mega arms upper and the other on an aero precision upper. all my barrels and bolts come from AR Performance. the x39 barrel is a 16" mid length gas system, he builds a much stronger bolt that uses all standard AR parts, even the firing pin. the new CPD mags all run well with them. i've been shooting fiocchi factory brass, and bought 1500 good brass cases and load 123 gr nosler bullets. i'm satisfied with the rifles. and a 300bo actually is not a suitable replacement, unless you're clearing your living room suppressed. my opinion only and your mileage may vary, my go to serious caliber is 6.8 spcII

thanks for the middle feed ramp lug info, good to know
M

I've built 3. They run flawlessly on steel case ammo($200/1000)with RedXArms extended firing pins, CPD mags, Heavy buffers. Over 2000 rounds through one build and over 1700 rounds on the other rifle.
Over 500 rounds on the pistol.
Same ballistics as 300BO. 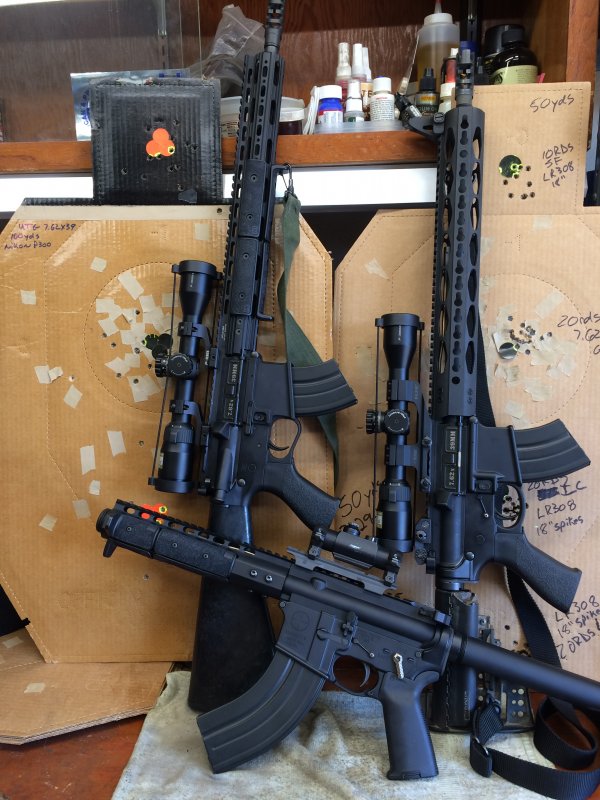 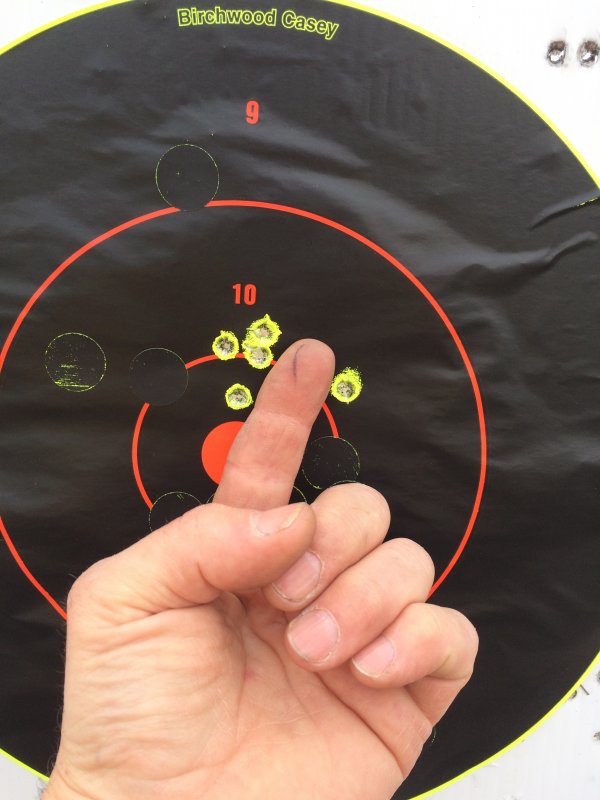 100yds, 5 shots, ulynovsk ammo with loose barrel extension, barrel Wiggles back and forth.

Bushmaster feedramps on 7.62X39 extension. I've never opened mine up. 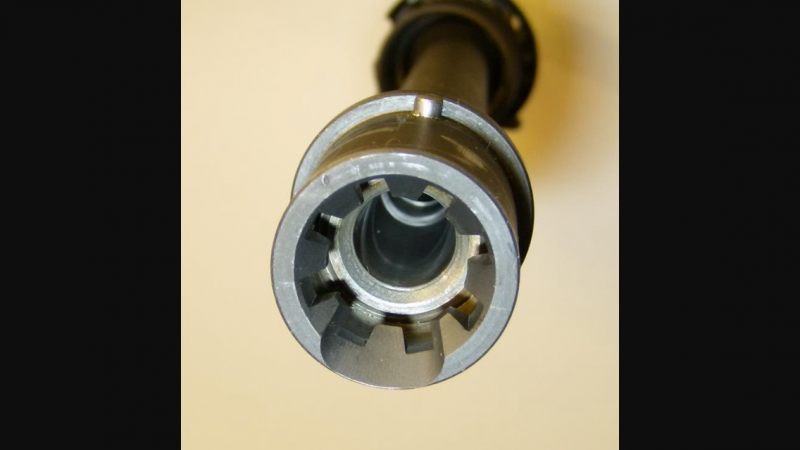 Interesting takes on the 7.62 x 39 cartridge in an AR action. I read the OP pasted article some time ago during the gathering stage of the first assembly (pistol). It ran flawlessly. Used a bolt made for the business, ie- not "flimsy".

Second gathering resulted in the rifle I have mentioned elsewhere. Shoots into an inch, rather large gas port as required, unmolested "M4" cuts on lower as are the ones on the extension (unmolested). Standard A2/A3 buffer & spring. Using 10 rd mags (I abhor any mag over 20 rds in anything), it will spew them as fast as the action will reset. Any ammo (as thus far tested), any weather.

After reading a significant amount on the various boards as concerns the cartridge in an AR, I got the impression that the various experiences / opinions were directly proportional to the varying degree of understanding of what makes an AR tick. Rarely did I read much, if any on the topics of pressures, dwell time, gas port sizes, gas tube/system lengths.

I got lucky. Mine all run. The rifle is accurate. The pistol, well, it is, of course, as many things in the gun world, a solution in search of a problem. At least it makes racket. lol