I am a old guy now, turning 73 in August but I get around pretty dang good for a Marine (Vietnam Combat Vet) 1966-1975. Started carrying concealed when I made the final cut to become one of the very first US Sky Marshals back in 1970. That was when sky-jacking airliners was a thing and President Nixon had enough of it. There were 78 of us who made the final cut. We were all on active duty representing all branches of the military and temporarily assigned to the FAA. I was the youngest at 21 year old (Sargent E5). The screeners kept trying to cut me because I was so young compared to most who were much older and senior staff NCOs. But I out shot most of them and somehow made it past the psycho shrinks well enough that my name always stayed on "the list" each morning until we were finally sworn in as Special Deputy US Marshals. We went through training with the FAA at Fort Dix, NJ and then a couple weeks at the FBI Academy in Quantico, VA before being assigned to our airlines. I was assigned to PanAm and flew out of JFK in NYC. Flew primarily European and Middle Eastern routes including Tehran, Iran which was still under the Shaw at that time. We would be out for 10 days or so at time and then get a week off in NYC to get our internal clocks squared away after going through so many time zones. It was great duty while it lasted which was about six months. It took that long to recruit and train permanent civilian Sky Marshals to relieve us at which time we went back to our regular military duties. That is how and when I became a conceal carrier for life. We were issued S&W Police Chief 38 Special Snub Nose Revolvers with Super Vel ammo, though I got permission to carry my own 2.5" Colt Phython as long as I promised to load only issued Super Vels and not magnum ammo. These days I am semi retired and reside with my beautiful second wife, Karol (I was widowed back in 2005) and we live on a little five acre place in Northeast Oklahoma just five miles from the Kansas State Line down Hwy 169. Karol is an avid conceal carrier as well and we make good use of our membership in the Coffeyville Kansas Shooters Club at the range there. Between the two of us we have seven adult children and 20 grandchildren. I am from Melbourne, Florida originally or at least that's why I tell people. My Dad was 24 years in the Navy (retired Senior Chief Petty Officer) and we never stayed in one place long enough to actually be from anywhere but, Melbourne is where I graduated from high school and where I enlisted in the Marine Corps...so it's as close to a home town as I can get.
Last edited: Feb 28, 2021

From a new member, to a new member. Thank you for your service and for a great introduction thread. Welcome.

Welcome to OSA. Would love to hear more about the sky marshall gig... 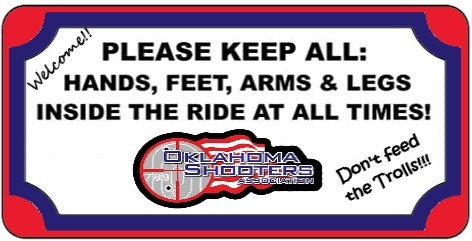 Welcome sir and thanks for your service

The Personal Side To A Tragedy.
2 3