Not For Squeamish - Spider got me

I'm guessing it was a spider that tagged my back about a month ago. I thought I just had another sebaceous cyst which I am prone to getting. Since it was on my back I could not reach it to feel it and just relied upon my disinterested wifey to give me updates. It was swollen at first and really deep with no head but it was black and blue like a bad bruise. When I laid back on it just right it felt, and still does, like there was a sliver or a sharp sticker inside it.

I kept applying heating pads and was given steroids for back pain so that probably helped bring it to a head. Anyway, it popped while I was showering and that was really fun trying to use a towel to pinch and squeeze getting a bunch of hard white stuff and pussy blood out. The hard stuff was like really smooth packed white sand and had a velocity behind it that had me cleaning the bathroom walls.

Wifey got home about 20 minutes later and mumbled something about those wedding vows didn't say anything about squeezing puss, and with a folded over paper towel and a grip like a number 5 Wilton bench vise let me know how much she didn't enjoy it by putting me on my knees.

Wifey took pictures and described the hole's depth to be about 1/4 inch deep. I've never been spider chewed on before and I never even felt this bite if it was one.

Is this a spider bite? What species? 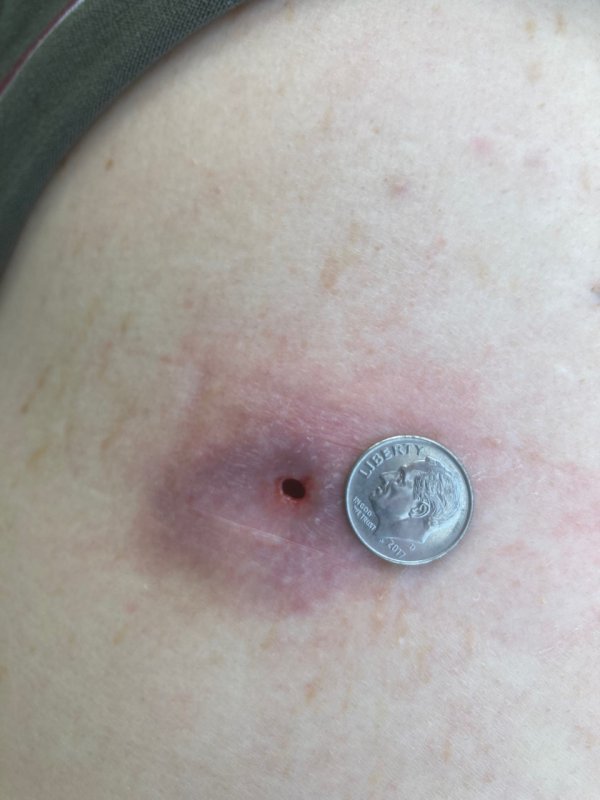 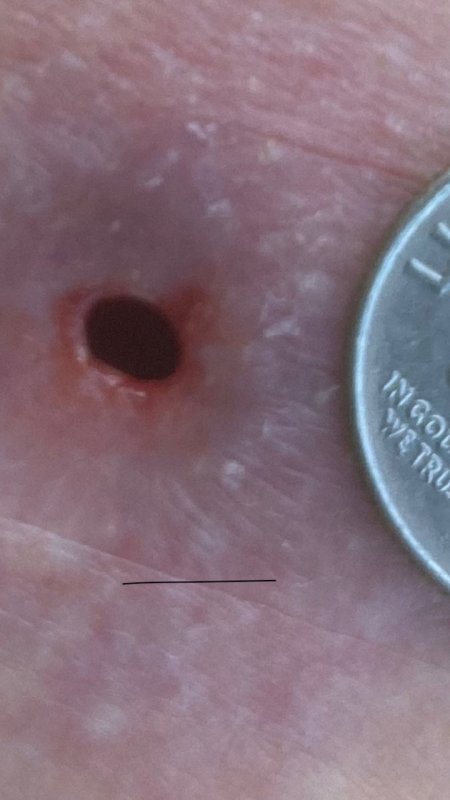 Dang that could be a fiddleback bite.

+1 on maybe a fiddleback.

I disagree. I think it is from a Brown Recluse.

Looks like someone stuck you with a ice pick!

Which ever it is, that looks painful!

A MONTH ago I'd venture a guess that it wasn't spider or at least not the venomous one mentioned above given the long timeframe..
But I'm no dr or pro..

Timmy59 said:
A MONTH ago I'd venture a guess that it wasn't spider or at least not the venomous one mentioned above given the long timeframe..
But I'm no dr or pro..
Click to expand...

That's my thinking too. I never had a fever or got sick either. I could be a week off on my month but it sure seems like it was a month.

Oklahoma Shooters has made me better
2

Why we shoot deer in the wild