More magazine areas. The iron railings overhead in such rooms were for transporting powder or shell in or out of the magazine for use at the guns.

These "tables" represent what powder or shell was stored on in the magazine.

Other quarters area. Note the rope system serving as "springs." As an aside, my mom and dad had a four poster bed that had little "pegs" (for the lack of a better word) every 3 or 4 inches which were to be used for "threading" a rope the length of the bed. While she didn't actually use rope for springs, the bed was old enough to have such a system. 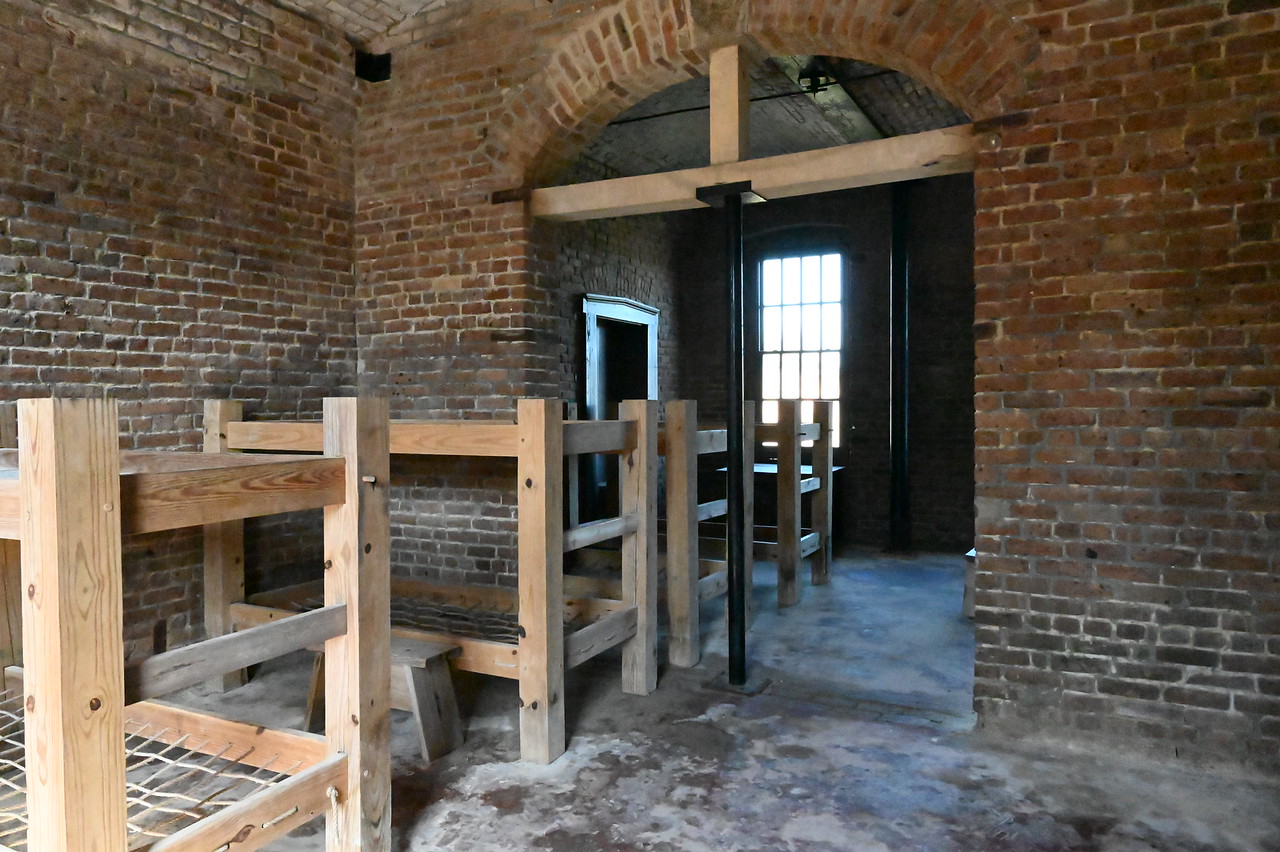 Terry, we keep saying it, but my goodness, you do good stuff with your photography equipment! Really enjoy seeing your work.

DavidMcMillan said:
Terry, we keep saying it, but my goodness, you do good stuff with your photography equipment! Really enjoy seeing your work.
Click to expand...

I second this.
Thanks for sharing Terry.

Thanks, Guys. While I have some say in what I choose to photograph and how I want to compose the image, I have to give most of the credit to the cameras and lenses. In that regard, the wife has been one to really see that I have the "good" equipment that I have. In fact, a few times she has insisted that we make such purchases. (That is generally because she has seen me "researching" said equipment. In the RV, she is normally sitting in the recliner love seat behind me when I am at the computer looking at YouTube reviews and such.)

This trip to Alabama and Chattanooga REALLY saw me be mightily impressed with the Nikon Z6 mirrorless camera. I set my cameras to be in as much of an automatic mode as possible so that all I have to do is see, compose, and shoot. Many of the shots indoors at the forts (and I've not posted on Fort Morgan yet) astounded me with how well this camera and the 24-70mm f/2.8 lens does in low light.

Oh man it's gonna be a LONG day.

Now to post pictures of Fort Morgan at Mobile Bay. I am something of a history buff, so when I got to researching the Battle for Mobile Bay, I ran across an article regarding David Farragut's famous quote about "Damn the torpedoes..." Here is a link to one that is similar if not the actual one I saw at first. It explains that the rest of Farragut's quote wasn't necessarily "full speed ahead," but still of a similar nature by using the nautical terms of "4 bells," "8 bells," or whatever.

In reference to the "torpedoes," they aren't like what we refer to today but were more like what we call mines. The next two pictures show what one of those would look like and explain how they worked. One of those "torpedoes" was what sunk one of the ironclads in the Mobile Bay battle. In fact, that ironclad getting blown up almost scuttled Farragut's plans. 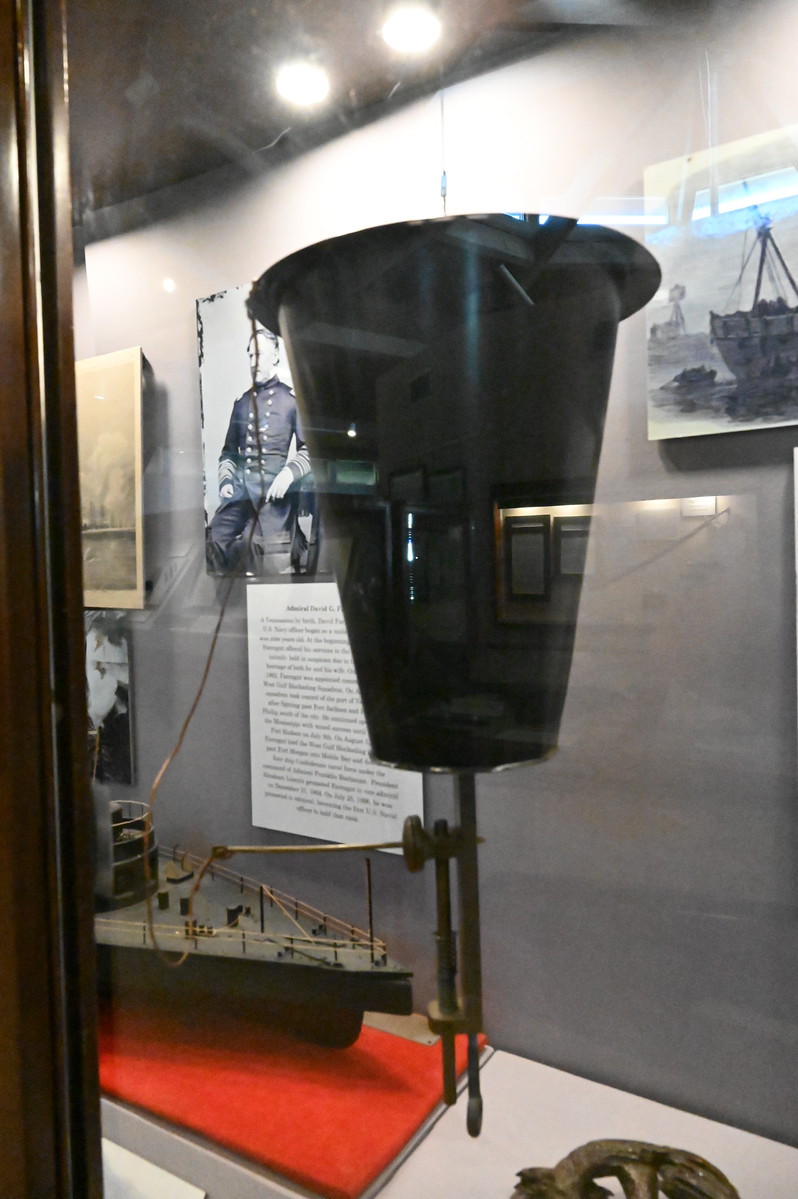 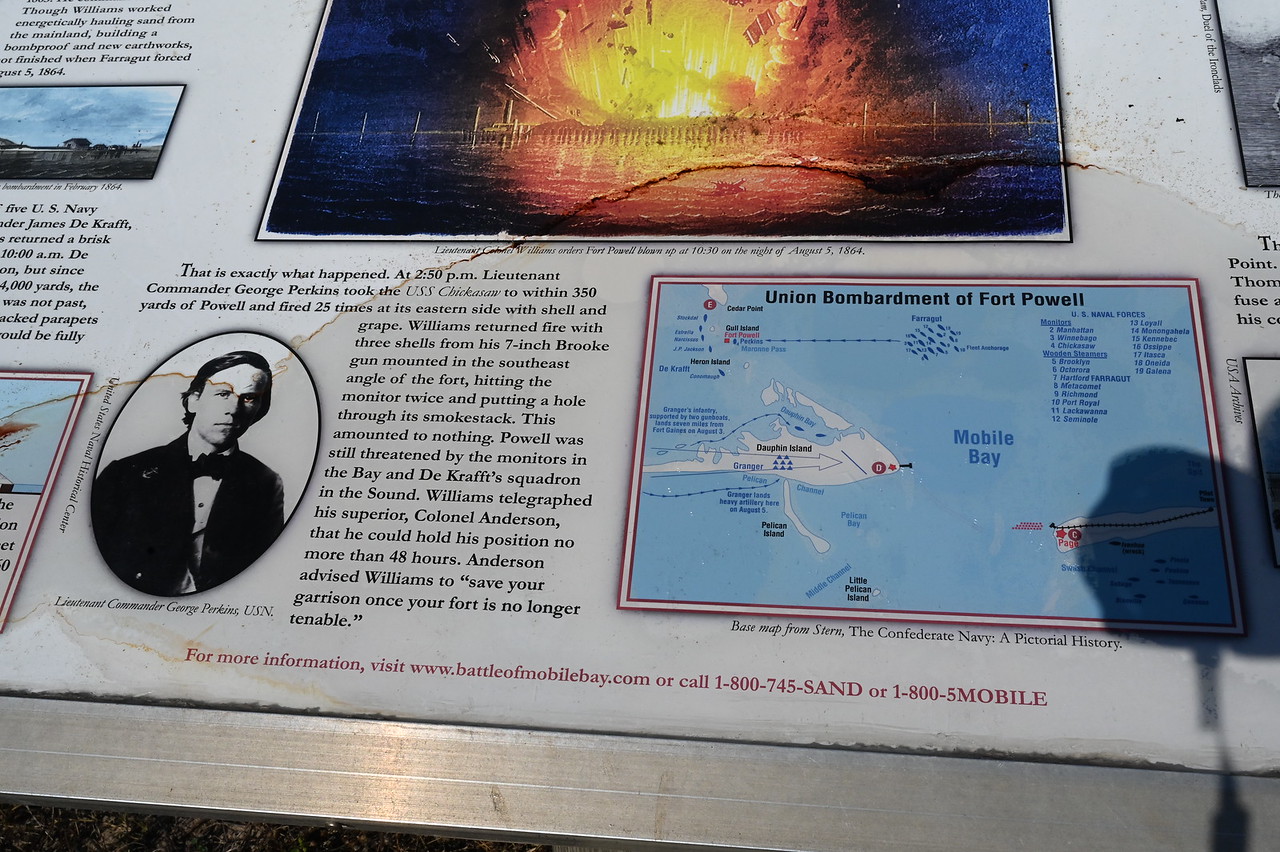 I tend to really like most information boards at historical sites because they prompt me to get online and look up more information about such things. That is how I found out about the story of Farragut's actions during the battle, including his climbing into the rigging to be able to see better.

Fort Morgan is/was the largest of the two forts guarding the entrance to Mobile Bay. If I remember right, I think the "torpedoes" were placed in such a place as to force an attacking fleet to pass closer to Fort Morgan than to Fort Gaines. While Fort Gaines is largely masonry, Fort Morgan also employs concrete and earthen embankments.

This is an image of the entrance to Fort Morgan. Such entrances were also called "sally points." 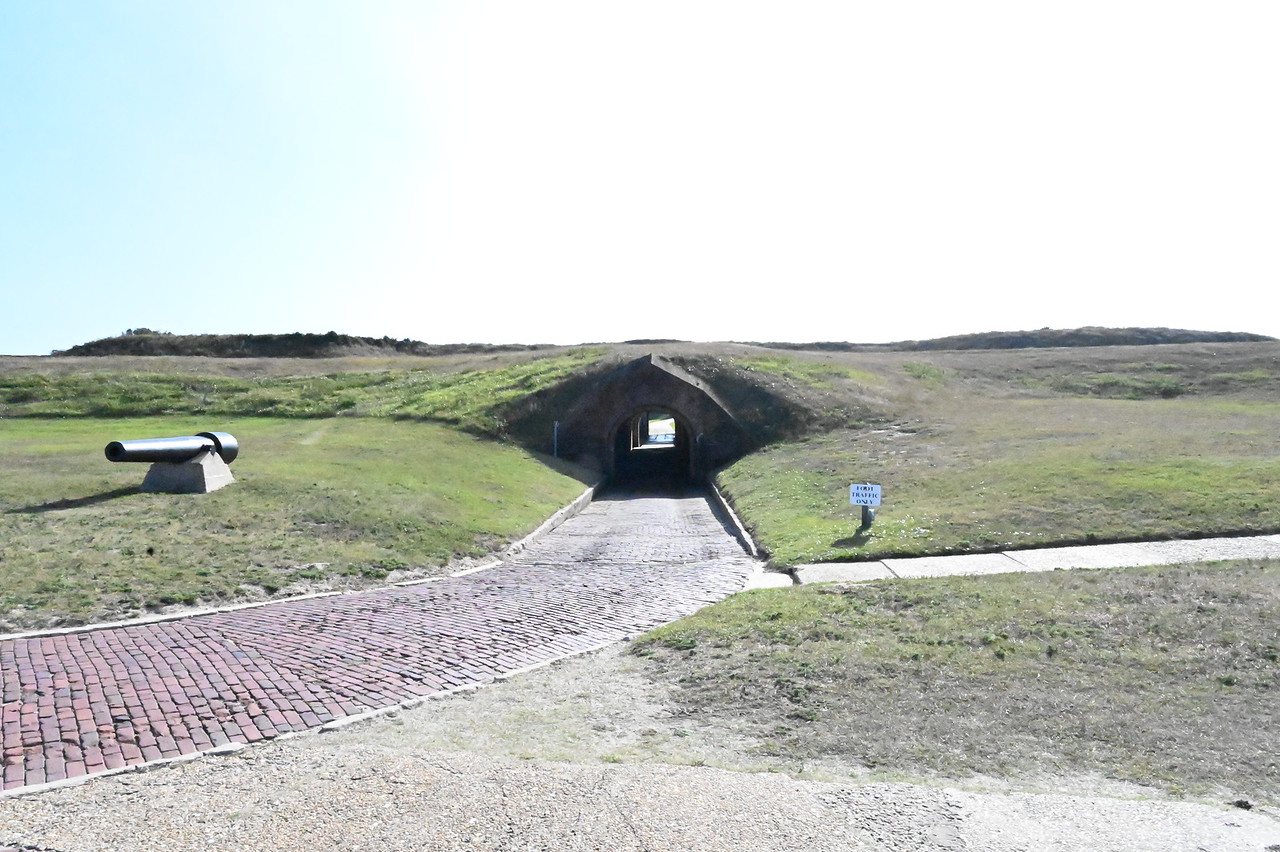 Both forts also employed "disappearing" guns that were designed to be raised for firing and lowered for reloading. Such allowed their gun crews to be somewhat safer because they weren't subject to direct fire. 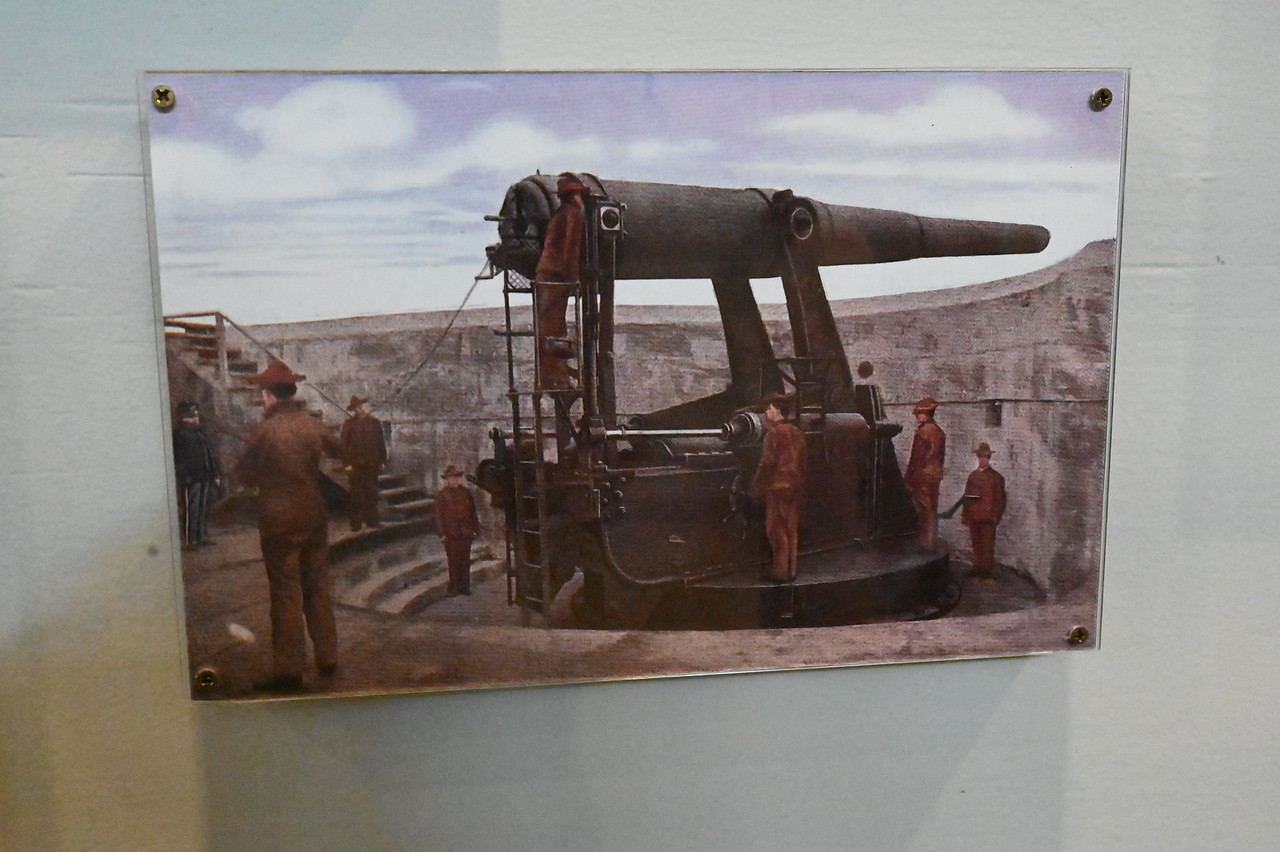 This is an image taken from the tunnel of the entrance towards the entrance into the second wall of Fort Morgan.

This is the area between the two walls. The outer part of the outer wall was primarily earthworks and the interior part was/is masonry. In the background of the photo, one can see a ramp that gave access to the top of the outer wall. This intermediate space could also be covered by cannon fire should an attacker's force be able to get past the outer wall. I imagine that grape-shot would be highly effective ins such a space.

This is one of the cannons that would have covered that intermediate space. This area was locked off, so I had to take this picture through a pane of glass next to the locked door. I am extremely pleased that my Nikon Z6 with the 24-70mm f/2.8 lens was able to get fairly good pictures in low light.

Such openings in the inside of the fort allowed for storage of lots of material, including powder and projectiles for the cannon and mortars. 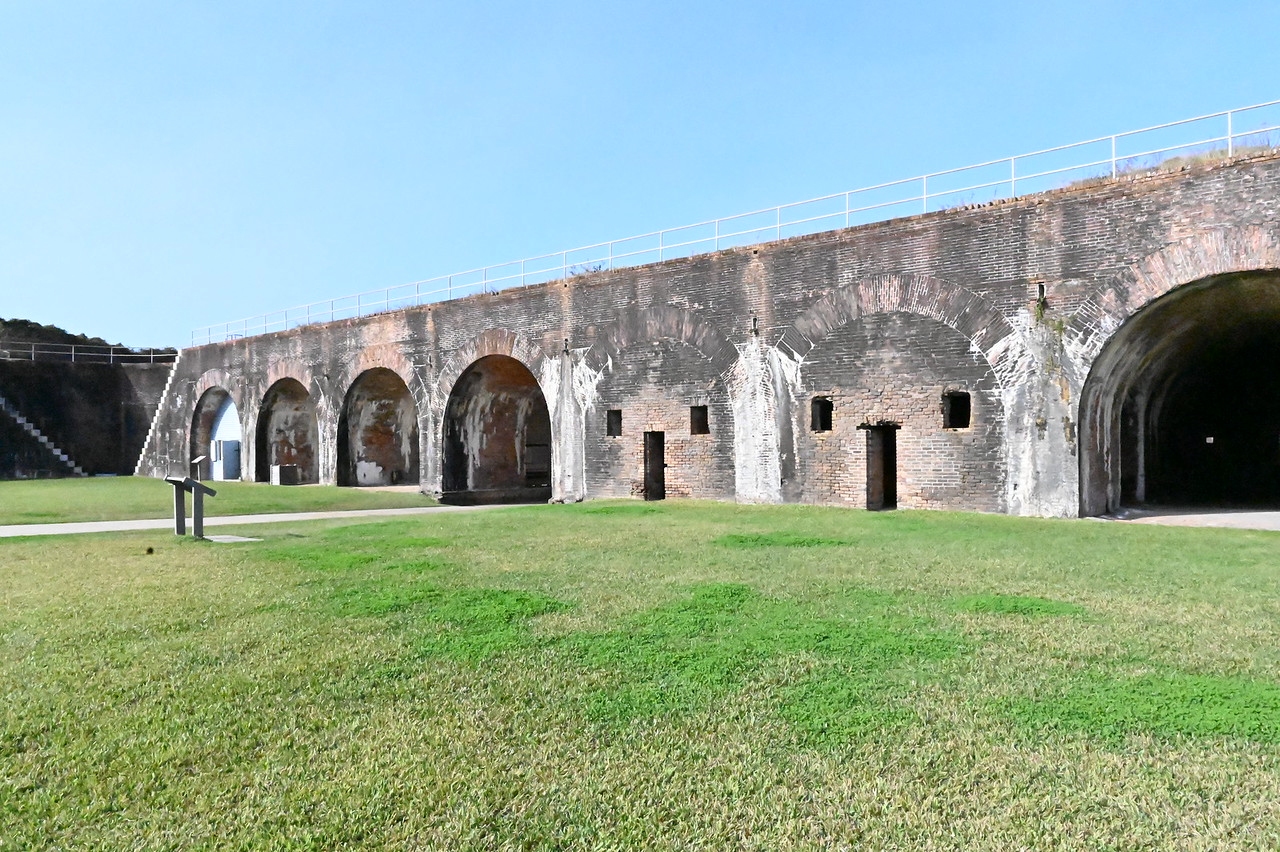 Inside one of those arched areas was the ordinance area. 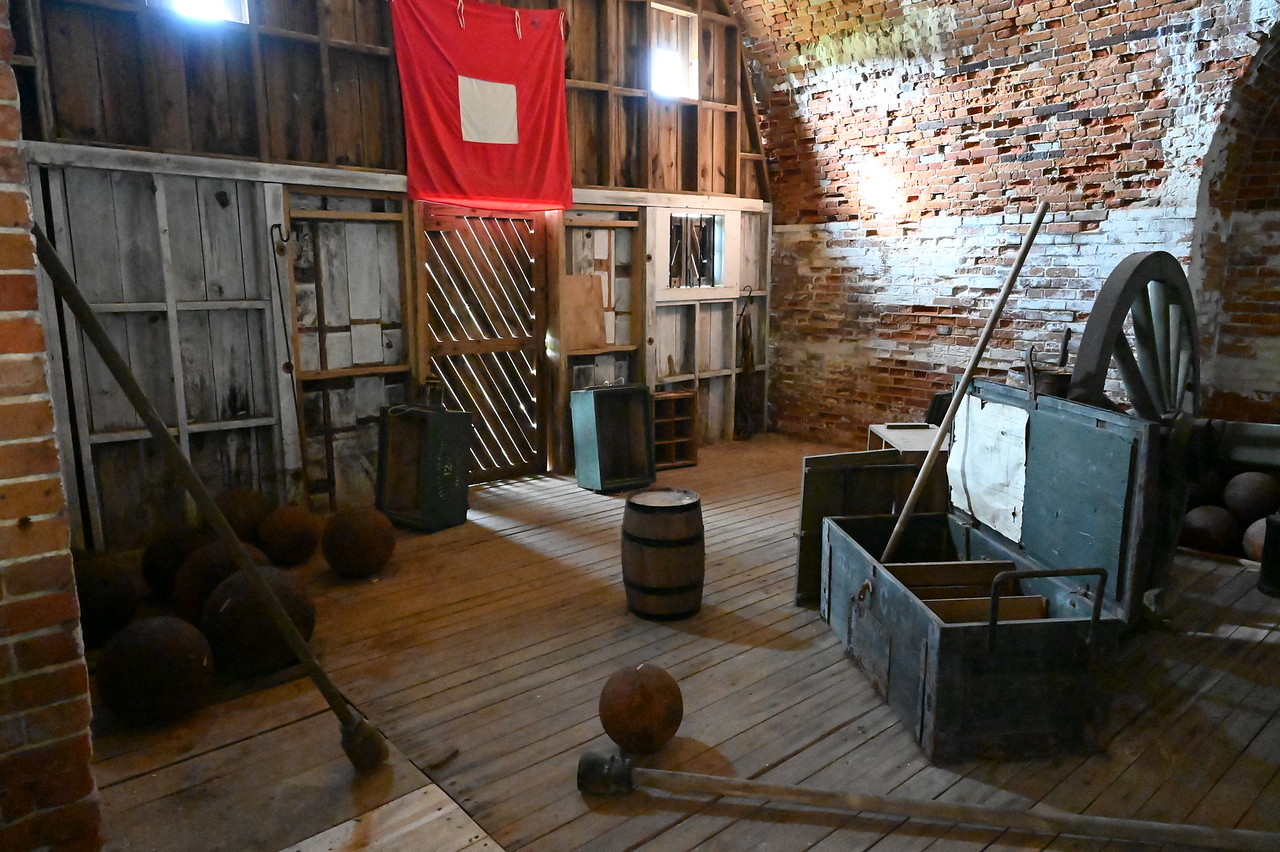 Openings along the wall guarding the intermediate area between the two walls were "V-shaped" (or perhaps more accurately, "X-shaped" to allow cannons to be swung from side to side to cover more of the area between the walls. In this photo, one can see the opening and a semi-circular "track" on which the cannon could be swiveled.

Taken from on top of the inner wall, one can see additional gun emplacements (white in color) along the wall. The area of arches includes the arch where the main entrance comes into the inner fort area. The steps seen in the foreground are each made of a slab of rock and each step is about one foot in height. I sure wouldn't have wanted to be the one that had to climb those stairs with any kind of load. I did manage to go down a set of those tall steps, but it was slow going with my bum knee.

I was occasionally hampered by the fact that some areas were locked off and one could only see inside through a window. In the case of this photo, I was also unable to get my camera close enough to the glass to avoid getting reflections. So besides getting to see inside, one also gets something of a "self-portrait" of the photographer.

This picture was taken from up on the inner wall. Besides the intermediate space between walls, one can also see gun emplacements at the left side of the photo. Gun emplacements tended to be concrete. One can also get just a glimmer of Mobile Bay in the background.

Battery Schenck was just outside the walls of the fort. Another battery was to the south of this battery and was built in the early 1900's for the placement of rapid firing guns to protect the bay. However, they discovered that that battery was built too high and was too much of a target, so it was deactivated and disarmed. However, a small portion of it was repurposed to be a control point for Battery Schenck. That other battery was called Battery Thomas.

To the east of Fort Morgan are additional batteries. Battery Bowyer proved to be ineffective, so it was later abandoned because its guns were of little value.

The last in the line of batteries was Battery Dearborn, and it included mortars with some very heavy capability. In one photo, one can see two pits with gears for those mortars. In addition, there are two other "circles" that have been filled in. Apparently those also had mortars, but those were taken and sent to France in WWI for our troops to use there. 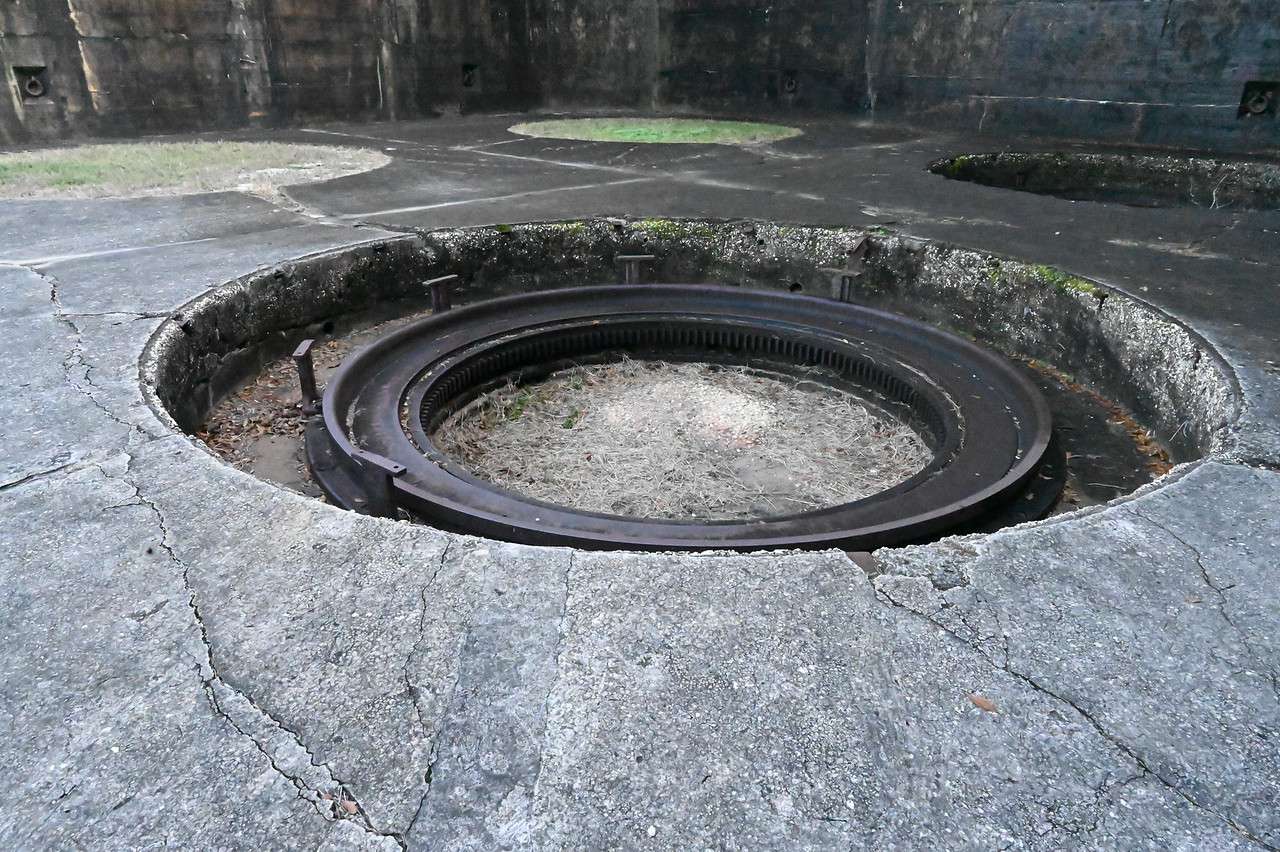 While the following isn't really historical nor beautiful, it was an interesting experience. There is a ferry running between Dauphin Island (near Fort Gaines) and Fort Morgan. The cost is $18 one way for a vehicle and its driver and then an additional $6 for each additional passenger. So, while it cost us $30 to cross the bay (roughly a 30 minute trip), it did more to save us time but not money. To go back north from Dauphin Island to Mobile and then across to the East Shore and then down to Fort Morgan, it would have been more than an hour's time.

In addition, this gave us the opportunity to see both forts from the bay.

This particular ferry had two areas where one could stand to view things on the bay and take pictures. Where I am standing to take pictures is one place, and the other is behind the ferry's cockpit area. 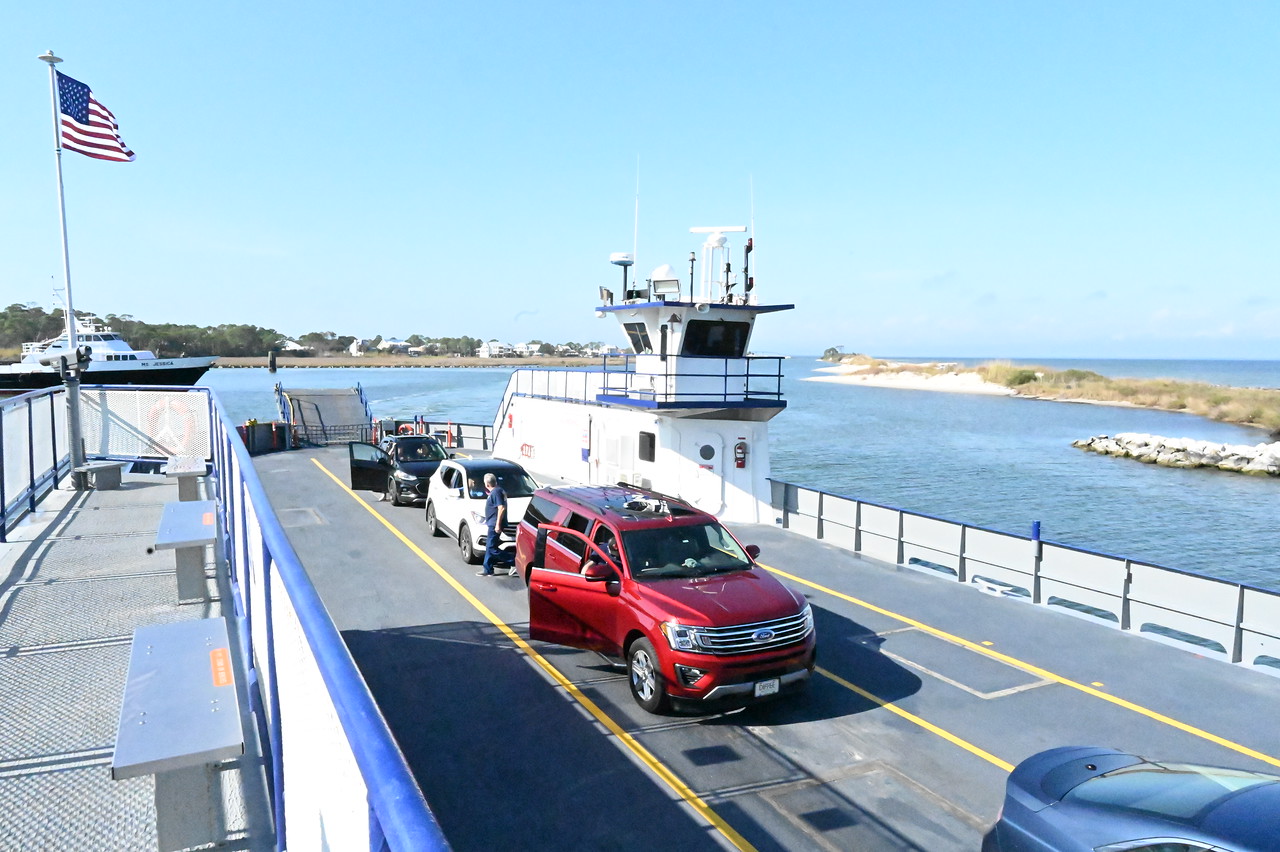 The locals gathered to see us off from Dauphin Island. A few even "waved" to us.

This is the best photo that I have showing Fort Gaines from the bay.

A bit hazy on the bay that day, but this is a view of Fort Morgan from the ferry.

I'm not positive because I can't see familiar markings, but I don't think this is a Coast Guard vessel.

And this is the ferry terminal at Fort Morgan. The ferry "parked" in between the pilings and nosed up to the "road." The line of vehicles in the background to the right of the pilings are motorists waiting to take the ferry from Fort Morgan to Dauphin Island.

I guess an interesting experience with taking the ferry, which was our first time ever to use one, was the experience of sitting in one's vehicle with the engine off and parking brake set and sensing the movement. That went away as soon as I got out and started gathering up a couple of cameras.