That sounds more like what I'm used to seeing on propane bills. But then, for our RV, we have an external 250 gallon tank that only has to be filled about once a year.

There is ZERO demand for drilling for natural gas in the US because we are oversupplied. That being said, the cut us where they can!

VarmintHunter59 said:
There is ZERO demand for drilling for natural gas in the US because we are oversupplied. That being said, the cut us where they can!
Click to expand...

I am pretty sure that at least 40% of the electricity in the US is natural gas fired generation. the demand you must be talking about is industrial and residential. Those two segments have been depressed like everything else due to the pandemic.

the current elevated price of natural gas is due to in part to several things, probably the biggest influence is the Biden administration has reinstated all the burdensome regulations on the energy industry and essentially stopped horizontal drilling and fracking. So producers costs have gone up forcing some of them out of business and supply has has declined.
C

natural gas prices are rising because demand is outpacing supply. unfortunately we decommissioned coal fired generation in favor of NG. in the current environment we will probably fill the gap with nuclear. never let a crisis go to waste 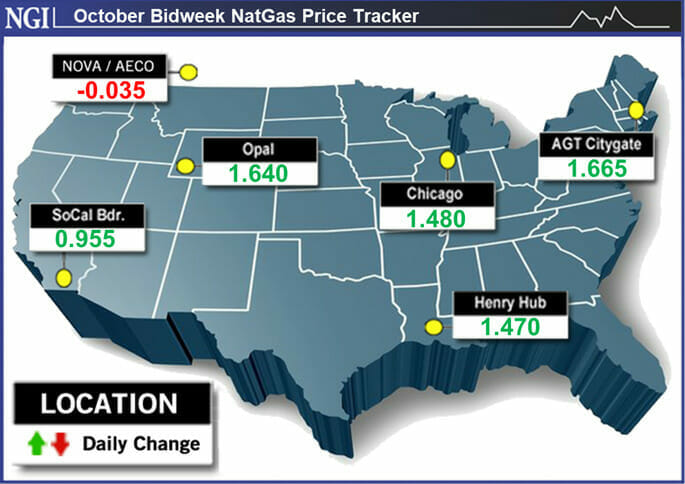 NGI’s October Bidweek National Avg. spiked $1.355 month/month to $5.495/MMBtu. A year earlier, when the coronavirus pandemic weighed heavily on demand, the October 2020 bidweek average came in at only $1.865.

Bidweek spanned Friday, Sept. 24 and Monday-Tuesday, Sept. 27 and 28. Natural Gas Intelligence announced in May the decision to shift to a three-day bidweek trading period, beginning with October bidweek, instead of the traditional five days in its price index determination period.

During bidweek, the October Nymex natural gas futures contract rolled off the board on Tuesday after gaining more than 70 cents over its final two days. It topped $6.00 in intraday trading and settled at $5.841/MMBtu on Tuesday.

[Winter Outlook: Wondering where natural gas prices are headed in the months ahead? Subscribers can replay our recent webinar with Refinitiv, in which we discuss where supply/demand fundamentals are headed this winter season, what the forward curve suggests and what to look for from a former natural gas trader. Play now.]

The November contract opened its run as the front month on Wednesday with a whimper, dropping 40.3 cents amid profit-taking. But the new front month surged back the following day, rising 39.0 cents, as overseas supply worries — and upward pressure on global prices — overshadowed a plump U.S. government inventory print and forecasts for light domestic demand due to fall weather.

The supply woes – spanning Europe, Asia and South America – defined futures trading through most of September and fueled the upward burst in bidweek prices. Key benchmark prices in both Europe and Asia both recently reached record levels.

“As Europe and Asia compete for limited natural gas supply on the global market, there is little stopping global prices from continuing to push higher,” analysts at EBW Analytics Group said. “The rapid escalation in global natural gas market conditions highlights the fundamental short-term price inelasticity of supply and demand. New production cannot be turned on overnight, even as prices soar.”

Against that backdrop, prices boomed across the Lower 48 during bidweek.

With global energy needs soaring but domestic demand waning amid mild autumn weather, analysts said Henry Hub futures prices could see-saw in the month ahead, as they have in recent days.

After slumping Wednesday and rebounding Thursday, the November contract on Friday shed 24.8 cents day/day and settled at $5.619/MMBtu. “Recent highly volatile trading is likely to continue,” the EBW team said.

Looking ahead, markets are likely to focus on Lower 48 weather patterns as well as the global supply picture and whether LNG can gather more momentum prior to winter.

Forecasts “favor very warm weather in the northern half of the nation” over the next two weeks, keeping early-season heating degree days “well below normal, all while having a lack of heat in the southern U.S.,” minimizing cooling demand as well, Bespoke Weather Services said.

The firm said its long-range outlook points to light demand deep into the fall. “The pattern is so weak” that, assuming five-year normal conditions beyond the first week of October, the firm projects that this month would feature the third-lowest gas-weighted degree (GWDD) total of any October in its 41 years of data. It “is not out of the question” that we make a run at October 2016’s record low gas-weighted degree day count. “This is driven by the La Niña base state currently in place.”

The leaner weather-driven demand is expected to result in robust storage injections during October, staving off any fears of a potential supply shortage in the United States.

The U.S. Energy Information Administration (EIA) reported an injection of 88 Bcf natural gas into storage for the week ended Sept. 24, the most recent covered period. The result exceeded the 74 Bcf print for the same week in 2020 and the five-year average of 72 Bcf.

The latest injection lifted inventories to 3,170 Bcf, though stocks held below the five-year average of 3,383 Bcf.

Storage levels in the United States over the past four weeks have steadily climbed, and analysts expect more of the same in coming weeks.

For the week ended Oct. 1, EIA “is likely to easily print over 100 Bcf, and potentially closer to 110 Bcf, thereby improving deficits” to the five-year average, NatGasWeather said. “The following one is also likely to be over 100 Bcf and a bit larger than normal to further improve deficits.”

Against that backdrop, the firm said, a sustained domestic demand rebound may not arrive until November.

However, in the meantime, analysts expect elevated LNG volumes to fuel energy needs in Asia and Europe. European stocks are precariously light – the result of extreme weather this year and a slow production recovery from the pandemic — and demand is surging in parts of Asia, led by mounting power needs in China.

These trends, along with pressing needs in Brazil and elsewhere in South America, are expected to extend into the peak demand months of winter. This is pushing gas prices to lofty levels on both continents, driving steady calls for U.S. LNG and supporting American gas prices.

LNG feed gas levels have been uneven amid maintenance work in recent weeks, but demand is holding strong and expected to push volumes close to record levels of around 12 Bcf/d by winter, if not sooner.

I am an oilfield person. They can start openig wells and flowing again if and when it gets to that point. They don't have to drill for it yet.

And it never ends!
Oh, i Changed my name to Awesome Customer.

Neanderthal said:
We're all electric, but I'm sure that they'll find a way to stick it to us too.
Click to expand...

I have family working for one of major power companies they have been converting from coal to gas but after last year have decided to leave last plant as coal their coal pile was near zero they have been stocking as fast as they can. Those of us on gas need to find backup heat. Even though propane Is not allowed in my town I am bringing tank in 200 pound size and getting ventless heater. I purchased two solar generators to at least keep fan blowing if power goes out. Everything I read says this and next few winters could be more than people under fifty have ever seen. Good Luck

How many times did this happen under Obama leadership?
2 3