When I was at the last ENS in Mustang, I was talking with....uh....whomever it was, and I mentioned my low-power .30-30 loads. Interest was expressed. I figured I would give out some info on what I've been messing with. 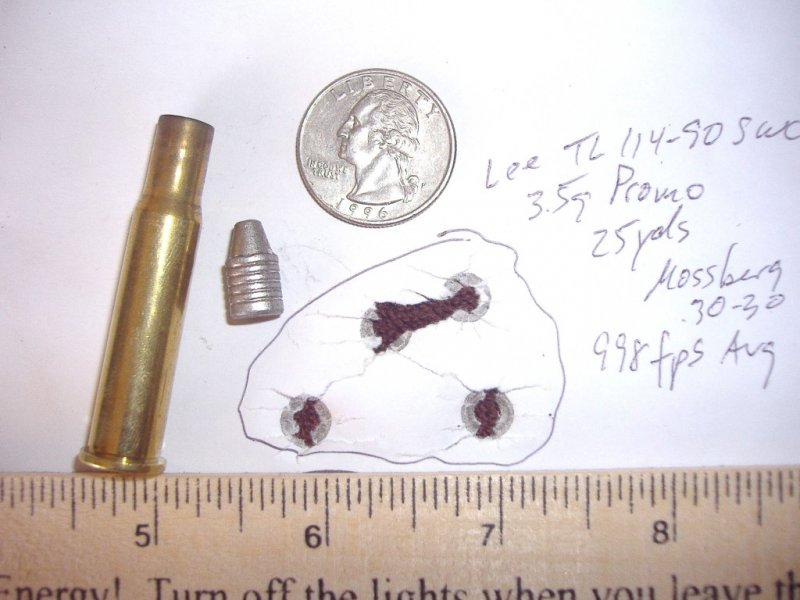 Going a bit too slow. I wanted to duplicate a standard .22LR, but with a projectile that is half again the diameter, and double the weight.
I tried again, using 4.0 Promo, but it went too fast (almost 1100 fps) for what I wanted. I was looking for something around 1050 fps.

Then, wanting to scope this Mossberg, I traded a member here some stuff for his unused 4x Tasco (with the Jap optics - very clear scope). I'm trying to get this rifle suitable for my MBH (Much Better Half), 'cuz she has my 336 and won't give it back.
This Mossberg is the weird looking "tactical" job, with the adjustable stock. The adjustable stock is why I got it. Mrs Dumpstick needs a shorter length of pull than the Marlin 336 offers, so I'm trying to entice her to trade for the Mossberg. She won't do it without a scope.

Back on track here.

Today, I went out behind the barn to zero the scope. I took some more rounds, a bit different this time.
I took 14 rounds with me, that's all I had loaded up. It took 8 rounds to get it close, the first 3 went who-knows-where. I moved up at 10 yards, just to get it on paper. 5 more rounds, it was close, so I backed up to 25 yds. Rested on my rickety portable stand. 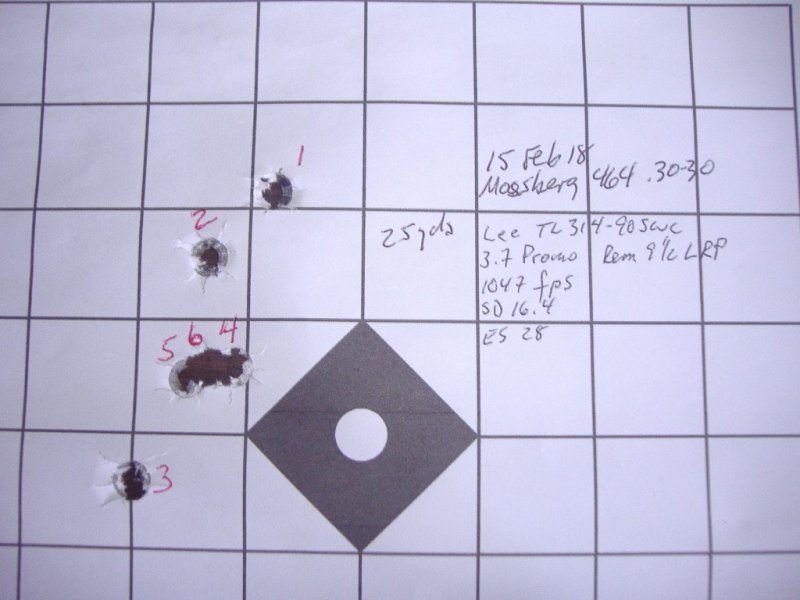 These are a hoot ! Pull the trigger, I can hear the hammer hit, it goes Pfft, then I hear it SMACK the cardboard target backer.


~1050 fps, good SD & ES. Accurate, and heavy enough to roll a rabbit at any reasonable distance. Quiet enough that one could shoot these without hearing protection, although I don't recommend it.

I think I got what I wanted. This is why I reload.

Love those little thumpers. Looks like you got that load dialed in.
You are correct those PFFT loads are so much fun to shoot.
Barrel will never warm up.

I made some 32-20 loads with 95gr round nose bullets I powder coated. 2gr of red dot through a heavy octagon barrel marlin ballard.
I bet you could go through 50 rounds in that 30-30 in no time.
D

Well, I ran into a problem. Up 'til now, I have been single-loading these rounds. I tried loading some in the tube magazine, to see if they would cycle.
They didn't.

The problem appears to be the neck diameter. I sized to .311, which made the OD of the neck right at .331. That fit okay in the chamber (if it'll chamber, it'll shoot...), but had a problem in the magazine.
It seems that, if I loaded 4 in the mag, the first 3 would feed fine. However, when the spring pressure lessened, the last round would not feed. It was sticking in the tube, from the neck diameter. 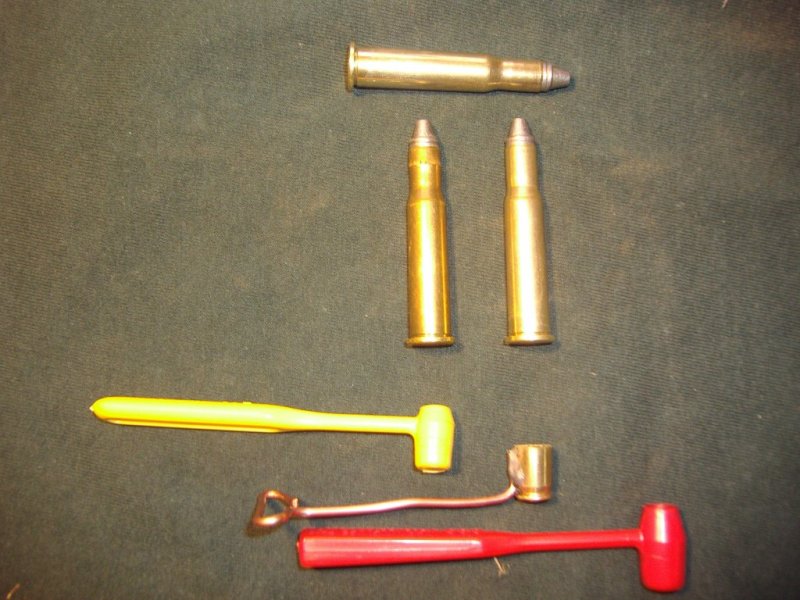 The round on the left is sized .311. You can see the mark on the neck where it rubbed on the mag tube. I had to take the mag tube cap off, and knock it out with a dowel.

The round on the right, and on top, are sized .309. I chose that diameter, because I have that sizer. I need to get a .310 sizer, see if they feed at that diameter.
The neck is .329 OD, and they feed fine thru the tube mag. Now, I need to re-shoot the test, see how they shoot.

The scoops shown - I wanted to set up a quick way to load these. The charge of 3.7gr Promo fell betwixt the newer yellow scoop, and the older red scoop (the red scoop looks huge, but has a hollow base underneath. It's not as big capacity as it looks.). So, I made one.

Now I have a scoop just for this load.

That is the way you do it. I have made many scoops from brass cases.

If you want them to throw really really close to the same then take a scoop to fill the scoop you plan on charging the case with.. in other words trickle into your scoop then card off.

Wider mouth scoops this pays off the small capacity ones are pretty darn close no matter what.

Now When I was shooting cast from my 30-30 I wanted jacketed accuracy to 100 yards.. I could pull off a few good shots then a flier would ruin it.
I was always getting fliers.
I thought ....and figured i would measure neck thickness some were .010" and some .014 thick.
I turned all my necks to .010" and the fliers went away.

Like you stated you need to shoot them and see how they do.

I also measured neck Id before loading..all needed to be exactly the same ID not .0005" difference.

Yes I sorted to get that.. annealing helped in that consistency department.

You probably knew all that.
D

As for the neck tension, and turning, well, this is a plinking/varmint round. I don't need tiny groups. I have no intention to neck-turn a few hundred .30-30 shells for rounds that will be shot in the backyard.
Hell, the 90gr bullet is so short, just the jump to the lands is probably 20 feet or so.

D
Took out the Taurus M-76 the other day.

How much is enough?
2