OKNewshawk said:
It doesn't undo any law, it only orders the evaluation of Federal laws against the Constitution. This is just my opinion, but I believe that this bill is aimed more at the flurry of ill-conceived laws being proposed and submitted in both houses of Congress as well as Resident Biden's executive actions and orders--not only on 2A issues, but on many different issues that will impact Oklahoma and its citizens.

Sent from my LGL722DL using Tapatalk
Click to expand...

I interpret it the same as you. The Brady Law was an amendment to the existing laws mentioned in these bills.

I think this guy just needs some clarification on the intent and application as well as a display of public support to hear and pass these bills.

I plan to try my hardest to make it to the Capitol.

I can't be at the rally but I'll give his office a call....Anyone got his phone #

OKNewshawk said:
I want to be there, but I would need to ride with anyone going from Tulsa or take some people down who can help me with gas.
Click to expand...

Someone from Tulsa was going to rent a mini van if he could get 5 others to hop in. He asked on OK2A page.

Oklahomabassin said:
Someone from Tulsa was going to rent a mini van if he could get 5 others to hop in. He asked on OK2A page.
Click to expand...

Unfortunately, he had to have enough people to commit by noon today so he could reserve a minivan. He missed the deadline so that option has disappeared.

Sent from my LGL722DL using Tapatalk

OK2A shows a different starting time, so I reckon anytime after 3:00 is good.
Copied this from an email: 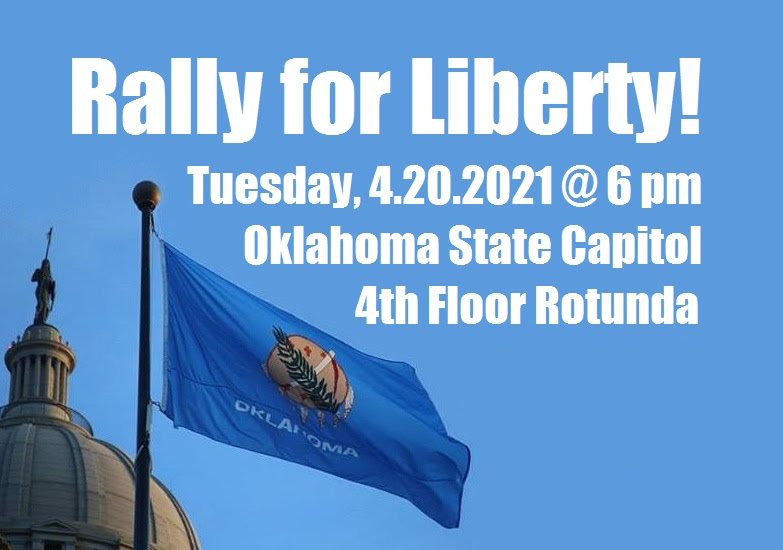 IT'S TIME TO RALLY INDOORS AT THE STATE CAPITOL!!!
WHY?
Senate Pro Tempore Greg Treat (R) is refusing to hear HB1236 which is the state's rights bill to protect ALL constitutional rights from UNconstitutional over reach from DC!

This is a MUST ATTEND INDOOR RALLY TO HELP PROTECT YOUR FREEDOM AND LIBERTIES!
This Bill has PASSED through the House Committee (4-1), PASSED through the House Floor (79-18), PASSED through the Senate committee (10-2) and is being held up from a Senate Floor Vote by ONE MAN! It is being blocked from going to the Governor's Desk for consideration by ONE MAN!
Governor Stitt has indicated HE WILL SIGN THIS BILL, if the legislature puts it on his desk, BUT currently ONE MAN in the entire State... ONE MAN in the entire Country is blocking this Bill from getting a Senate Floor Vote and getting to the Governors desk! ONE MAN is blocking this Bill, which helps protect your Constitutional Rights and helps protect YOU and your FAMILY's Freedoms and Liberties!
This Bill was authored by the Oklahoma State Speaker of the House and coauthored by SEVENTY-FOUR (74) additional House Representatives who signed onto this Bill! SEVENTY-FIVE Total!!! That's an overwhelming amount of House support since there's a total of 101 House Representatives.
THIS BILL DESERVES A VOTE IN THE SENATE BUT IS BEING BLOCKED BY ONE MAN!!!

There's STRENGTH IN NUMBERS! - INVOLVEMENT!
Your presence is needed at this Rally! If there was ever a time to be involved, IT IS NOW! Let your presence be known and your voice be heard as "WE the PEOPLE" rally together at the Capitol on Tuesday, April 20th! There will be THREE (3) additional Constitutional Liberty groups with OK2A, also!
Become an active part of the "STRENGTH" and 'VOICE' of OK2A! Be prepared. Get involved.

MORE RALLY DETAILS!
Show up early (4:00 pm) Park in the South parking lot or in the SW parking lot. Enter the State Capitol through the South entrance and go through security/metal detectors. Firearms are prohibited inside the State Capitol. Go to the 4th floor Rotunda (center of the Capitol, under the dome) We will be going to Sen. Treat's office so be sure and get there early! The Rally will begin around 6:00 pm. After, we will go into the State Senate Gallery, as a group, to quietly observe the Senate voting on bills requested by OK2A! You will be free to leave at anytime, necessary.
Bring your friends! Bring your family! See you there!

Hodrod said:
I can't be at the rally but I'll give his office a call....Anyone got his phone #
Click to expand...

Emailed the senator today and will call tomorrow...

chuter said:
OK2A shows a different starting time, so I reckon anytime after 3:00 is good.
Click to expand...

Myself and a buddy are planning on going. Hope to see some of y'all there!

wawazat said:
From what I have gathered from the O2A texts, he feels like it undoes the Brady Law.
Click to expand...

That right there proves he don’t support the 2A. If he did, he would want to repeal the Brady bill.