I understand inflation and the shutdown come to play but, I’m seeing a 500% increase in the price on the most common used refrigerant since 2000. How much is this the chemical companies greed playing the game or legit? Seems like gouging almost.
Equipment is about to go up another 10% again.

Duly noted, but it was up rapidly during the time summer of 2020 until Trump left in 1/21.

I don't buy refrigerant, but R-22 was going up in the obama era as well until it was phased out. During the Trump administration, R-410A was dropping, now it's rising. Just like the price of gasoline. Brain dead biden keeps saying the putin price hike on fuel when in December of 2020, the United States was energy independant and shipping oil and gas overseas with our surplus as a net exporter. After the inaugration, fuel prices kept rising as joe signed EO's to shut down our energy sector. It's well documented.
Now, the idiot is draining our strategic oil reserves to bring down gas prices which is failing currently while now shipping some of those same oil reserves to European countries. WTF???
Once again, now you know why your cost of doing business is going over the top, and your not the only business experiencing that.
This country is going into a recession with huge interest rate hikes on loans you need to maintain your business or expand it, with the cost of living going out the roof effecting your employees so much it's going to cost you your personal income to up their wages to afford to live or they will move to someone that will pay that as well as up the costs to your customers, some of which will no longer be able to afford the work and decline it when they could have afforded it previously. That certainly has an affect on your business with higher wages, and less customer base to support it.
Recession is a terrible thing and there is no way we are going to avoid going into one with the biden administration printing money like there is no end to paper.
I love mom and pop businesses. They are the backbone of this country and I try to deal with them exclusively, but they can't stay in business much longer and maintain profitability under this administration.
Are there suppliers of goods taking advantage of this situation? There are.
But the suppliers are dealing with the same issues the folks downstream are dealing with for the most part.
G

r 410a is beginning to be phased out also

Wouldn't it be wonderful if you could mark up your labor charges based on something that someone else said or did? I think many businesses have done exactly that that for no other reason than they could. And some of those businesses are going out of business and they'll blame their closure on the same reason they increased prices.

I had a guy come out a few years ago and install a pound of 410a. Didn’t know the guy and someone recommended the company he worked for. And he is not one of the guys on this site. There is at least one great resource on here that is very helpful and goes out of his way to help those who ask questions.

The company the came out charged me $100 for the refrigerant. I bought a 25 lbs bottle on eBay for $110 a couple days later.


Its gone up a lot since then, but even if the cost to the contractor went up 500%, they would still be making a huge margin at the same price they were charging years ago. 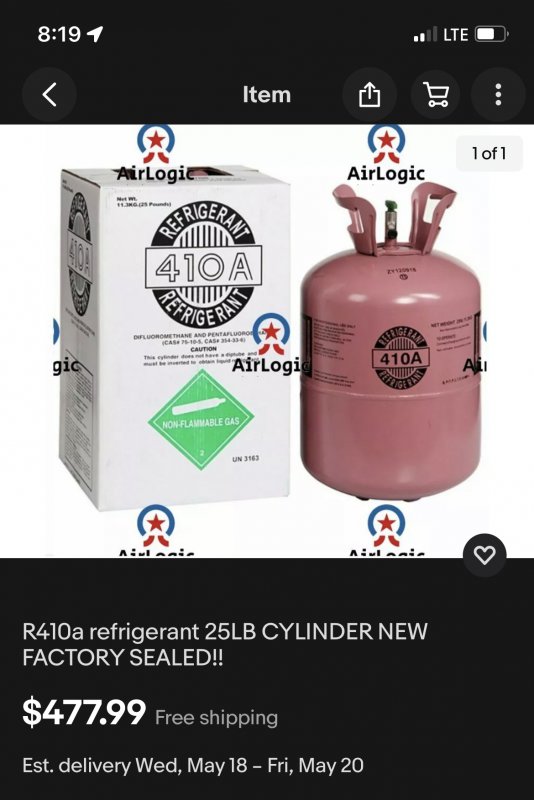 saddlebum said:
r 410a is beginning to be phased out also
Click to expand...

So what's the latest and greatest? Going to be needing to change out an A coil or whole unit before long.

R
2020 Starts with Another NICS Record