That is beautiful. Cannot wait to see the finished product.

Ok, here we go.
Working on a few parts rust bluing while I wait for coats to dry on wood.
My propriety formula is so proprietary I'll tell you what it is. Ferric Cloride and a shot of Vodka. That's IT.
Made from dissolving nails in masonry acid you get a Atrwood's and bubbling hydrogen peroxide to oxygenate it and convert the acid to ferric cloride. You don't even really need the Hydrogen Peroxide if you have an aquarium bubbler. It just make it faster, Hydrogen Peroxide is loooaded with oxygen. That it why it works so good as an antiseptic. Bugs can't live in an oxygen rich environment. That is all rust is is oxidation on iron.

The shot of vodka? That is just a little alcohol for a surfacant. Well dangit, we have to have some excuse to have two ingredients. That and one shot of Vodka for the browning and one for me. And another for me. Well you get the picture. Ya gotta have sumptin if your sittin around sanding on metal all day.

Picture has a wood chisel I didn't even prep with 8 boilings/cardings some not even left to rust 3-4 hrs lying next to a magazine tube with a factory rust blue. Its already a little darker after you end the process with some sort of oil applied. The other is everybody's favorite el-cheapo kitchen knife, a Old Hick. with 4 coats dun. The last picture is my stock butt after only 30 minutes. Already gun metal grey and Hella harder than that wipe on crap. 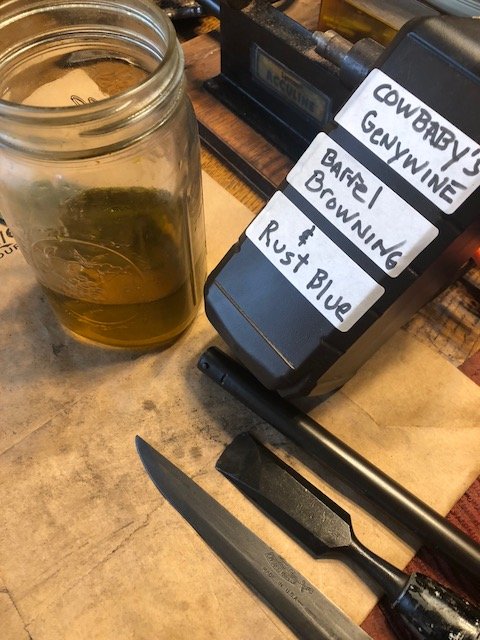 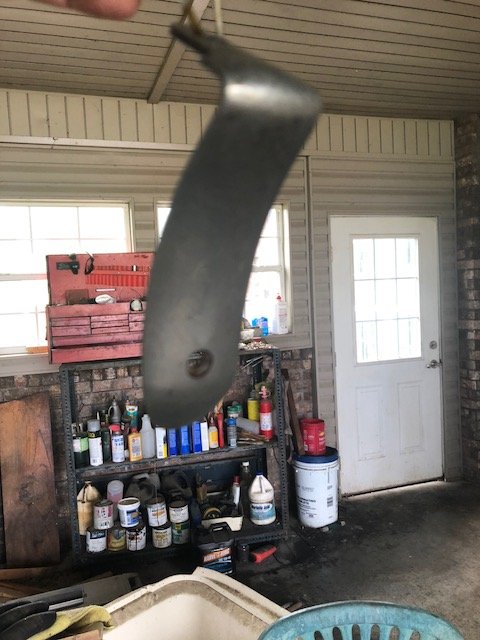 Cowbaby said:
My propriety formula is so proprietary I'll tell you what it is. Ferric Cloride and a shot of Vodka. That's IT.
Click to expand...

Most of my projects include a shot or two of Everclear...

OMG this freakin Winchester Nickel steel is tough tough to take a rust, nickle steel being just about a stainless without the chromium. Even Winchester had heck blueing this stuff and later models changed to being stamped "proof" steel instead of nickle. That is why you see a lot of these old thudys with a gray or plum brown spotted receiver. In the 20s and 30s they had issues with the blueing completely flaking off. This one only had two tiny pieces of the original bluing left back by the hammer. It was some sort of strange blueing I am not familiar with. Looked more like a coating. Carbona maybe I don't know but it was about flaked off after 90 years anywhoo.

I am going to BEAT a rust blue job on this dang thing if its the last thing I do, I gave the receiver a pickle wash of sorts of some diluted Hydrocloric acid until it flashed grey and then dunked it in water. I also added some copper sulfate(fungicide for your rose bushes) to my barrel brown solution thinking it might help. Why? well it seems to be in most barrel browning recipes so what the heck. It seems to be helping. I think I got a good bite on two coats finally in the first pic that is right after swabbing in on. It might work. The other pics are of the lever, and misc parts rusting after a few coats. That dang third piece, the floorplate and hammer are some more of that nickle stuff too, they have more coats than the lever and still is not as dark. The third pic is the magazine tube on its last run. I think it is going to end up looking the best.

I have learned a bunch about this rust blueing doing this one. My barrel browning kept getting stronger as i guess the vodka was evaporating out or something. The dang barrel browning is getting more shots of vodka than I am. HA. I have learned that this stuff is pretty stout and you need to keep diluting it weaker as you add coats or it will take some of the first layers off. I am going to end up at 1/4 strength before its over for the last pass I think. Rust blueing, yea I have learned pretty much anyone can rust a gun gun metal grey but to get that bespoke shotgun blue black look takes some kind of special skills.

Just a dummy trying to learn something. 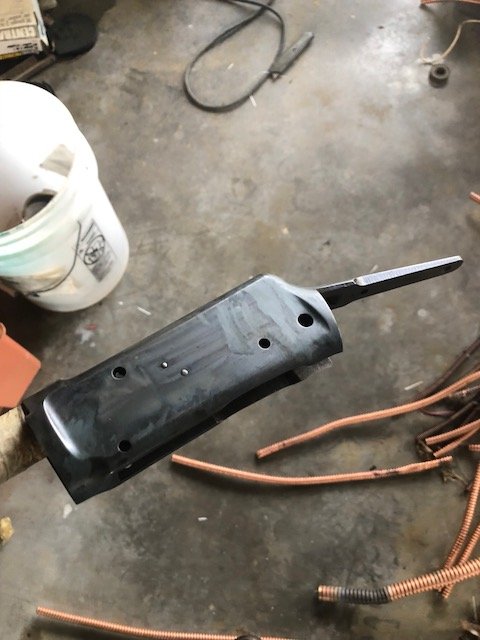 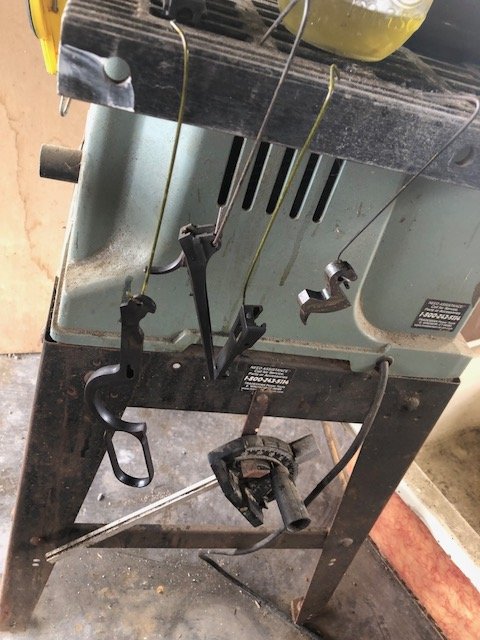 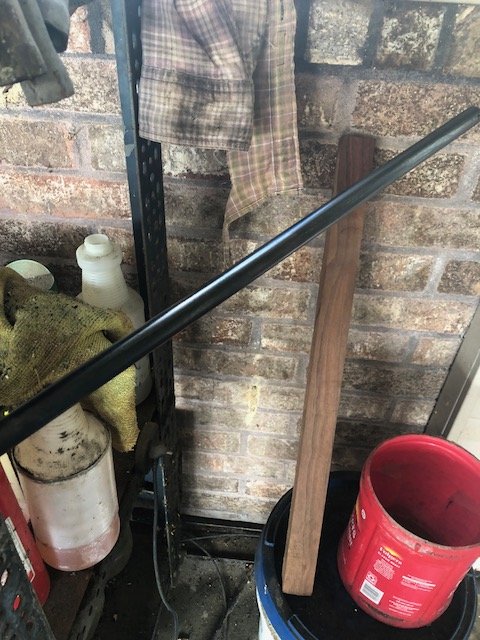 What carding wheel do you have? The only ones I have seen are damn expensive. $90+ at some sites.

Snattlerake said:
What carding wheel do you have? The only ones I have seen are damn expensive. $90+ at some sites.
Click to expand...

You can always use 0000 steel wool and do it by hand as its less aggressive than a wheel but maybe not as polished a job. That is what I am doing, that and an ancient Chinese secret. I do the last bit with a pocket off an old pair of Wranglers. Piece of demin is an old timers trick.

Not Holland and Holland perfect for sure but overall not bad for a non gunsmith.
The only thing I did not rust blue was the barrel. It wasn;t in terrible shape and this thing has a mirror for a bore and I did not want to chance pitting it. Fit and finish came close. Can't stick a cigarette paper in anywhere but one bobble on the butt inlet. I sill have a few coats of oil to rub out on the stock but the weather has been humid and it wants to haze so I am going to let it dry a week between the last few coats.

I had a buck horn sight installed as I dearly love those because they have a built in rangefinder if you know how to use them. Turkey fills up the sight-50yds, half the sight 100, well you get it, it takes some practice. I put a flatter angled ear sight on it. A jump type sight if you will as when you mount it and your slightly off it is faster to get it to center. THis is my brush gun so I thought it would be more fitting. Im going in those pine thickekts next year toward the end of season and those old smart alecks better be ready.

Learned a bunch, took longer than I expected and did not increase the value of this old bird one iota. I don't care I will never sell it, I got tired of looking at a JB weld patch and having to coat it with cold blue after every season only to have it rub off. I don't think that you can rub this stuff off if you tried. But mostly I just did it for my Grandad. I wish that old Woodsman was still here and I could present it to him. I learned a lot from that old man and I miss him.

Shout out on some fine refinishing work