I found this old post on a Ruger forum. I am in the process of making this modification to my Ruger M77 Hawkeye 30-06. Thought I’d pass it along to this group. I didn’t realize the M77 was known for accuracy issues. Enjoy!

I am a new member to the forum and have this tip that I learned many years ago on accuracy issues with M-77's. I did not invent it, but rather read it in some magazine article on Ruger M-77's back then. I first used it on a 1987 M-77 with tang safety and recently used it on a new Hawkeye, both 308's. It involves pressure on the steel magazine box that is squeezed between the action and the floorplate and trigger guard. I have found that best accuracy from my rifles has been when the steel magazine box is a little loose, such that you can move it back and forth and up and down just a little when everything is tightened down. If you cannot get a little movement in it, then the action is tightened down against the magazine box and pressing on the tab on the rear of the floorplate hinge and the front of the trigger guard, rather than on the stock or the bedding in the stock. This causes wildly variable groups.

This can be checked for effect on your rifle by assembling it without the magazine box, tightening it down and shooting the rifle one round at a time placed in the chamber by hand. If groups improve, then the lack of magazine box free-play may be an issue.

The remedy is either glass bedding to a thickness that raises the action a little and gives a little free play to the magazine box, or using a dremel tool to grind a little off the front and back ends on the bottom side of the magazine box. I have tried both and had great results. Improvement can be as much as reducing 2-3 inch groups (3 shot 100 yd) down to 1/2 to 1 inch groups. This has not caused any feeding issues, probably because the magazine follower spring pushes the rounds and magazine box upward towards the action and it is then in the correct position for good feeding.

On the Haweye, which shot 2-3 inch groups with most all ammo (some were worse), I tried a Hogue overmolded stock with full length aluminum bedding block. When all tightened down, the magazine box was quite loose, and the rifle shot great (3/8" 3 shots at 100 yd with my pet accuracy reload). I didn't like the Hogue stock due to weight and tackiness of the grippy surface sort of sticking to my hunting clothes when moving the gun. I went back to the OEM stock and ground the interferences on the magazine box like I described. Results were accuracy went to 3/8" also.

Hope this helps anyone who is pulling their hair out with M-77 accuracy issues. 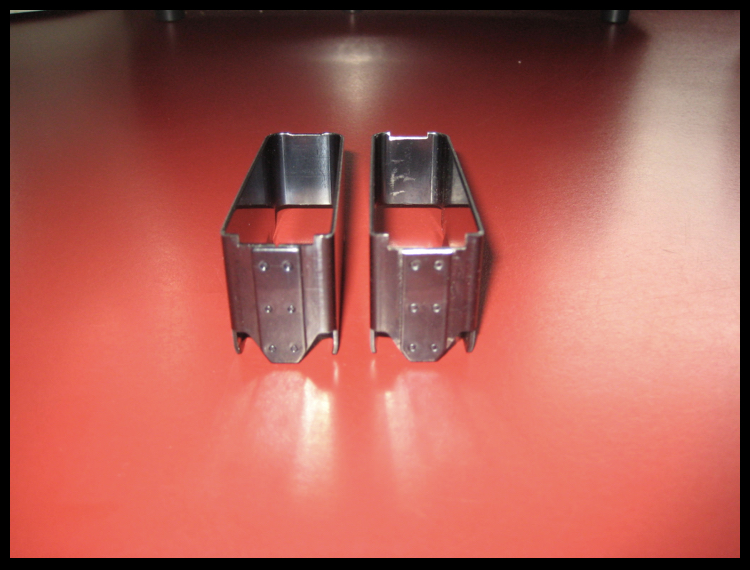 Before on the left, after on the right.

I bet between my dad and myself, we bedded over two dozen m77 during the 80's and 90's. Tang safety factory triggers were SO much better and user friendly than the Mark II.

Ruger M77 tang safety is probably my favorite factory hunting rifle ever produced. From looks to performance, it checks all boxes for me.

Okie4570 said:
I bet between my dad and myself, we bedded over two dozen m77 during the 80's and 90's. Tang safety factory triggers were SO much better and user friendly than the Mark II.
Click to expand...

That’s what I’ve heard. First M77 I’ve owned so it’s all new to me. I am going to do the mag box modification and I’ve ordered a “hunter” trigger spring from Ernie Paull (erniethegunsmith.com) that should reduce trigger pull by 1.0 - 1.5lbs.

Interesting. I have heard that 77s were not that accurate. I always figured Ruger didn't know how to make a good barrel.

panayoti said:
Interesting. I have heard that 77s were not that accurate. I always figured Ruger didn't know how to make a good barrel.
Click to expand...

From the replies to this thread on the Ruger forum this magazine box mod is a miracle fix for the accuracy issues on some M77’s.

The folks that said they had no issues with accuracy all commented their magazine box was slightly loose to actually rattling.

I just bought a new M77 Hawkeye and the magazine box is definitely bedded hard against the trigger guard tab and floor plate tab. Maybe it happens to some and not others due to the variances in wood stock tolerances?

I know I was advised to really tighten the front bolt and leave the other two just tight enough they don’t fall out. In fact I was advised to use blue Loctite on the back two bolts. Maybe the factory over tightens those bolts on some guns. Beats me, I just thought it might be helpful to folks on this forum.
Last edited: May 12, 2022

panayoti said:
Interesting. I have heard that 77s were not that accurate. I always figured Ruger didn't know how to make a good barrel.
Click to expand...

We never owned one that wouldn't shoot 1/2" groups at 100y or less with a bedded stock and hand loads. Almost couldn't keep them under 1 1/2" groups out of the box with factory ammo. We used to pick up some really cheap used m77 tang safety rifles in the 80's and 90's that folks said were not accurate and were just trying to get rid of them to get something else.

@white92coupe
Thought you would like to see this thread