So recently I had the chance to pick up a 3500 count box of "Scrap 223 brass" that was advertised as being in the process of conversion to 300 blackout. It was 170 for all 40 primed pounds of it delivered to my door. This is the adventure.

To start, the plan was to basically grab this for the primers and use them in other things. But before I could get there, I had to sort. And Sort. And Sort.And Sort. This step took a while and really bummed me out, because this adventure was only going to be worth my time if it didn't, well, take all my dang time. But 5 hours later, I had a couple of piles and a plan for each.
1. Really crappy stuff - punch out primers, toss the rest.
2. On the fence stuff - Maybe punch primers and then ???
3. Totally and perfectly useable stuff without needing anything other than regular prep.
4. Pile I sold to another member on here who wanted to give it a try cheap.

So right off, I think I got about 3700 pieces on my 3500 count order. That's nice. Could also be skewed if they measured by weight since about 500 pieces were trimmed to 300 Blackout already. But now I have to start dealing with this mess. I decided to start by depriming the Total Crap pile and the 300 blackout pile. Now, this was a mistake that I paid for because I missed a really important consideration:

This was military scrap. All the cases were crimped. This meant that popping the primers out squeezed them through the crimp and about 50 perecent failed to seat properly. I found this out, because I took a bunch of off the shelf 223 cases and primed them and watched as a bunch of primers just kind of fell back out. So I had to spend more bonus time taking each case and a decapping rod to give the ones I just primed a nudge to make sure they were snug. More time lost, but a lesson learned.

Anyways, now I'm way into this adventure and like a Hobbit trudging through three movies to Mount Doom I'm stubbornly pressing forward. By which I mean, my garage and reload bench are covered in piles of brass and I have to deal with this crap to move on with my life. This would involve more money.

See, after the failed "save the primers" episode a few hours beforehand, I had a plan. But like Iron Mike says, "Everyone has a plan till the first time they get punched in the face". Or something like that. I decided that if I can't save the primers I can save the cases. By making 300 Blackout after all. You might recall a few paragraphs up where I said I deprimed the 300 cases? Yeah, that made me feel extra stupid. Because I wasted hundreds of innocent primers not realizing that earlier.

Now, I have 300 dies, but that's about it. Good thing that's all I need. Well, except the 7 dollar lee case trimmer kit. And the dang 40 dollar harbor freight cutoff saw. And a spare pack of blades just in case. So anyways $60 poorer, I kept on. Watched some vids and then had to modify a plan to covert the case while primed. So this was actually not bad, but as I planned on never doing this again, I didn't amazon prime the cut jig so I did probably waste some more time.

Anyways, I got the brass chopped, chamfered, deburred, and then was like "I can't size them with the decap pin in the die, let me take that out. But HO HO HO! Lee dies you see have the DECAP ROD INTEGRATED TO THE STUPID DIE. I said some bad words. Okay, more than a few bad words. So thought some trial, error and sacrificial brass, I figured out a way to adjust the die so that the expander bell would go all the way through the neck properly, but NOT touch the primer. Delicate, but possible. And I'm the dang king of delicate as I smashed my way through this process.

Now I've got a few hundred pieces run through, and now it's a time of true masochism. Because I have to trim these all on the Acculine. I said more bad words. You see, if I took the Lee trimmer and did these on the lathe, the lee system indexes on a stud on the other side of the primer pocket. So it does NOT work with primed brass. The Acculine works different but blisters your hands and makes your daughter say "Mommy mommy I learned a new word from Daddy today" that gets you bad looks at dinner. But I survived. 241 pieces of heck there. final Chamfer/Deburr and I'm ready to load them.

Now I've gotta finish the other few hundred pieces. Back to the lathe. The shop fan is working overtime so far this year and my sweat puddle is approaching the size of my pool. But I survive again. I just have to ADD BACK PRIMERS BECAUSE I"M DUMB.

So if I do the math, I saved a total of 2700+"200ish" primers" which gives me a cost per piece of about 6 cents per brand new never fired primed case. WAY more labor than planned, but all things considered I think it was a good deal.

/Sigh/ And now to start the next box I suppose.

Well if it's any consolation, $0.06 per primed case/ready to load is a helluva deal at this point in time. I've seen primers selling for $0.14 by themselves in bulk lately and they were imported from one of those Russian bloc countries too.

I feel your pain on the prep though, it's a helluva lot of work. Such a pain that I have the Dillon trimmer setup for my 650 on a dedicated toolhead. I can go through a 5 gallon bucket full of brass easily in 4 hours if I can keep lubed brass ready for the case feeder, that's the hard part. And I STILL AVOID doing 5.56 unless I make a project of it and do that whole bucket at once!

Just squeeze them small primers you snatched out of the crimps in a vice a bit to flatten them out a couple thou, or use superglue.

Shadowrider said:
Well if it's any consolation, $0.06 per primed case/ready to load is a helluva deal at this point in time. I've seen primers selling for $0.14 by themselves in bulk lately and they were imported from one of those Russian bloc countries too.

I feel your pain on the prep though, it's a helluva lot of work. Such a pain that I have the Dillon trimmer setup for my 650 on a dedicated toolhead. I can go through a 5 gallon bucket full of brass easily in 4 hours if I can keep lubed brass ready for the case feeder, that's the hard part. And I STILL AVOID doing 5.56 unless I make a project of it and do that whole bucket at once!
Click to expand...

I haven't tried the Dillon system but a bucket in 4 hours seems to be a heck of a dang return on time. If tube is the hold up, I don't know how you do yours, but I've just mix lanolin oil with isopropyl alcohol (I think 91% and 1:10 ratio but I'd have to check my notes). The good thing about that is you can shoot a few squirts in bucket/bowl and hand mix, then a few more, and hand mix and it pretty much gets everywhere. Really easy to work with and might be great in large batches.

To be fair, on the brass prep here, I might not go quite so nuts except for the fact that it was marketed as "scrap" meaning that there are guaranteed to be "no-pass" cases in the bunch, so the only way to root them out is process them all, and make extra sure the ones that need processing are allllllll done to the same spec. As long as I can find my own stuff I'll not have to worry about it again for the life of the brass probably.

The lanolin lube is probably the best way to go. You literally have trouble keeping brass in the case feeder to process doing it any other way. You can go almost as fast as the case feeder will drop them with the Dillon trimmer. Honey Badger makes a setup using a Bosch router that will do the same for converting .300BO and the newer upgraded Dillon trimmer is pretty much the same speedwise. Processing .223/5.56 can truck right along.

Rez Exelon said:
/Sigh/ And now to start the next box I suppose.
Click to expand...

The second box, on first glace, looks to be in much better condition at least. But yeah, dreams in gold and nickle.

I did watch some video on the Giraud Power Trimmer and Henderson Precision Powered Trimmers on the web today. Those are sexy as all get out too. I just don't know that I can drop a grand on them. (Okay, sure they are like 400-500 each, but if I paid for one of those I'd also have to break down and get a real annealing machine too I suppose).
M

You also need something to shoot 300BO out of!! I know you're getting one!!
Yeah, I bought 500 of these from rezex.

So my pile was somewhat similiar but I decided not to deprime any more than i had to.

About 10 cases were trash and I did deprime those and will try the primers later.
About 5-10 were partially cut to 300BO.

Around 100 I cut to 300BO length, these had neck or case mouth damage, or split when brass was formed.
The rest are about an even split,

About 150 Drop in and out of a 223 case guage, these do not have splits, no major shoulder damage, no case mouth damage, I will reload these.
They do have case/neckdents.

About 200 Do not fit a 223 case guage and need resizing.
Bigger dents but will iron out when fired or resized. No case mouth or major shoulder damage. 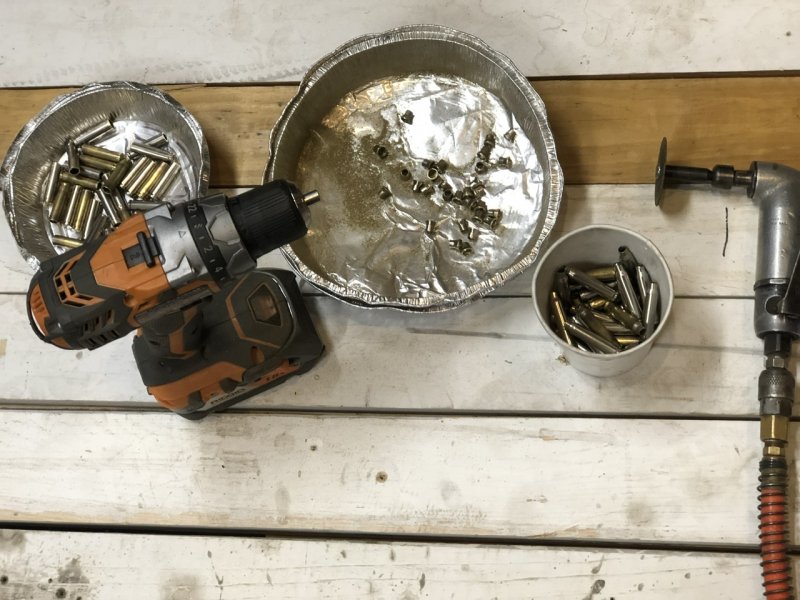 So it turns out the second box was "better" ish to me. Kind of mixed at least.

2750 ready to go cases --- in even better condition than the previous set for the most part I'd say.
650 cases that will need conversion to 300BO. That's going to hurt a bit (again). I might break down and get a power trimmer.
100ish cases that had been started on 300BO conversion (and need help or were in the trash pile.

So a lower count of brass this time, but still over the advertised number. Interestingly that kind of supports my theory this places weighed it rather than counting it on the last box since that had much more 300BO cases, and a higher total piece count. The 650 cases to do is going to be a heck of a pain, and since I don't need them I may table that for a bit. At least long enough to let the blisters turn to calluses hahahaha!

Anyone else have factory Speer ammo/brass problems
2 3