You pull the hammer back and let it go again and sometimes it goes off.
I had 4 clicks one time while hunting and the 5th time it shot.
Got my deer but that is not the way to play in the woods.

I spent 2 hours today dialing in the hammer strike to the nipple on 2 of my sidelocks.

Success at last I did not have any misfires or clicks at the range today.
Over 40 primers shot and not one had to take another hammer hit.
I like it.

I chucked the nipples up in the drill press and sanded the nipple a tick smaller and finished the sand job with 800 grit.
Nipples are sized.

Now I took a flat fine file and filed the top of the nipple so it was shiny and flat just a couple strokes.

Basically making making it line up perfectly with the hammer.

More dry erase marker and more hammering until I got it perfect.

Now onto the main spring. Some springs over time get soft and you need a harder primer hit to set them off reliably.
I cut 2 strips of galvanized steel sheet wi9th tin snips. Strips were 3/4-1" long and a little narrower than the main spring.

That main spring will have a small slot down the middle of it where you can wedge these thin steel strips into the slot to allow more spring tension.

Trigger pull will be a bit stiffer but that is a small price to pay for reliable ignition if your issue is light primer strikes.

Both of the guns I tweaked this morning were fails last week with one not even igniting a primer after a dozen attempts and one was hit it 2-3 times and it will go off.
CVA Bobcats ...Both of them..One I paid $25 for just recently

Now loading technique to eliminate hang fires if some of you do not know.
I use loose powder Pyrodex RS.
After I drop the powder down the barrel I tap the butt of the gun on the ground 8-12 times to settle the powder and then i hold the muzzleloader at a slight tilt with barrel still point up about 1:00 and I tap on the barrel with my palm just above the nipple area.

You want that powder to migrate through that turn and get under the nipple.
Seat the projectile.

Now remove the nipple and see if powder is under it.
If it is then install nipple and cap it and fire it.

If no powder is under the nipple add some.
This will eliminate hang fires.
Of course nipple hole needs to be clear of obstructions.

Yea sidelocks are a pain and inlines are the way to go.
But after the range trip today guess what I need to work on to make it fire.
Remington 700ML that I bought 4 years ago at a pawn shop.. light primer strikes.

I did get it to shoot 6 times and when it does shoot it is accurate.
D

Excellent. I have an old sidelock in the safe, haven't shot it in years. I used to use it deer hunting; a patched roundball is more effective than the ballistics would indicate.

I need to dig it out and play with it some.

Had a CVA sidelock that the hammer would not hit square on the nipple. It drug on one side of the nipple, a torch and a little heat got it back in line. Funny thing about it is I called CVA and that was there suggestion. They did not want it sent back to them. A year or two later needed some small parts for it and they sent them free of charge so can't complain.

Shinneryfarmer said:
Had a CVA sidelock that the hammer would not hit square on the nipple. It drug on one side of the nipple, a torch and a little heat got it back in line. Funny thing about it is I called CVA and that was there suggestion. They did not want it sent back to them. A year or two later needed some small parts for it and they sent them free of charge so can't complain.
Click to expand...

When cva first sold their kit rifles, that was in the directions iirc. I can remember dad putting his together and having the torch out. I've still got it, bought the kit at Otasco. 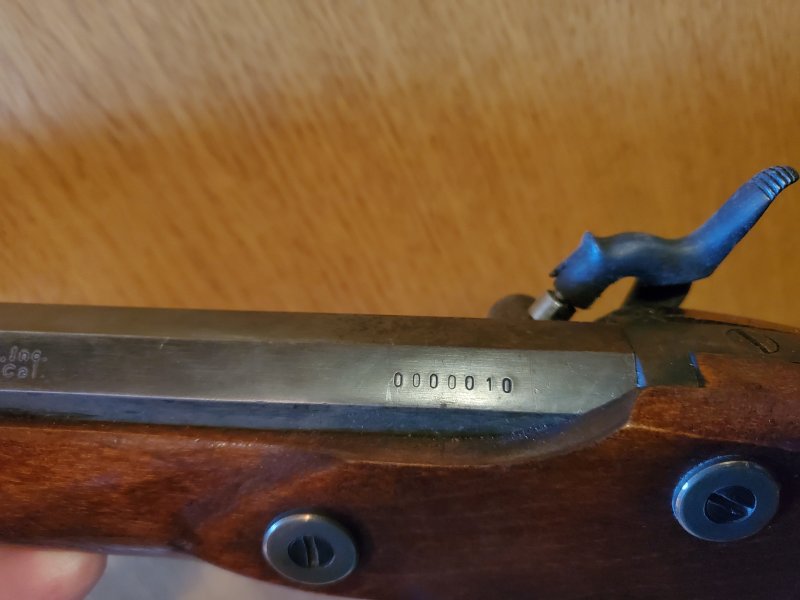 I bought a MagSpark kit and converted mine to use 209 primers.

Sounds like the solved the issue of the cap not firing.
If not, your next step is making sure nothing is binding.
I would pop the lock out (loosen the screws and tap them to pop the lock loose) and check it for rust.
CVA locks are not the best or worst. If its not well lubricated or rusty, it may be light on the hammer fall.
Use a screwdriver that fits.
If you don't have one, find a pawn shop that sells road kill grade screwdrivers cheep and get a few to modify until they fit right.
Worn out drywall screw bits are another choice for modification fodder.

The main spring is the problem child for assembly and reassembly.
You need a way to cramp it before disassembling the lock.
That can be as simple as a small notch filed in a piece of steel bar that fits squarely over both legs of the spring when the hammer is cocked.
The hammer and tumbler can usually be disassembled by loosening the hammer screw and giving it at tap with the hammer supported by the lock plate.

Better to dunk it in automatic transmission fluid and work it about 1000 times than push a disassembly your uncomfortable with.
ATF is oil with detergents in it that carry away grime.
Its amazing what it will wash out.
After the ATF treatment, wash with your favorite solvent and lubricate with the oil of the day.

Detonation is another issue.
If the cap is going off, but the powder does not light, be sure the path for the spark is clear.
That means some time with pipe cleaners.
Also touching off a cap or two prior to loading clears out any oil that collected in the touch hole.

If everything is clear and goes pop but not bang, its the powder or the cap.
I converted my TC to a musket nipple before in-lines were the thing.
Its a bigger hotter cap, but not a 209 primer
I also shoot real black powder in mine.
Yes, its more expensive and hard to find (Dongs in Tulsa has it), and messy to clean, but it lights a lot easier.

Is it better not to tumble rifle brass?