So recently I, like many other folks, have been getting curious about subbing primers based on availability. I'm a testing oriented type, so I decided I'd setup a test, execute it, and report results back to the group. These are said results.

I made 6 batches of 9mm ammo. Taken from a random sample of @mouthpiece 9mm, I cleaned it all the same, and made it all on the same single stage press, with all the same equipment. These were NOT controlled to be identical headstamps, as part of my test idea was to account for a real world mixed range brass type scenario. That said, when I discuss groups, I'll give myself leeway on two shots. Is that cheating? You be the judge.

Testing was done at H&H on the rifle range in groups with two guns.
1 - Beretta CX4 16" carbine, Holosun reddot with a confirmed spot on zero. This one I've played with a fair amount and know that it's very accurate, and can hold very tight groups. This was tested at 20yards.
2 - Smith and Wesson M&P9 M2.0 Compact 3.6 inch courtesy of @Glock 'em down listing a price I couldn't pass up. Originally I was going with a different pistol test, but I figured I'd do a function check on this and have the exact same experience level with it to even things out. Testing here was done at 10yards.

Note --- I am not recommending this load for YOUR gun, I am simply saying it for reference on testing. Basically, I did SPP, SRP and SPM with two different powders. Also note, I have not reloaded a heck of a lot of 9mm. This is early in my load test program, so none of those are known good loads. I just picked some stuff in the middle of the safety zone and rocked it.

General Performance note: One of the main things I was looking for in this test was Point of Impact shift. In both the carbine and pistol tests there was no measurable POI shift (unless you count me screwing the pooch with bad shots. Rifle groups were all centered right on the expected POI and all the pistol shots were centered low and left (Looks like I'll need to check sight adjustment on the M&P or my shooting. God help me, I'll have to do more range time!)

The thing I really wanted to look for was accuracy. With all the shots being in the same spot, could I see a noticeable expansion in the groups with the only difference being the primer?? Below I'm going to provide two numbers --- the first is the group size accounting for all 10 shots. The second is the group size for the 8 closest. Personally I feel that should provide a better sense of performance as during the carbine test, I had the gun on a rest, but was squatting behind it which allowed me to move some, and on the pistol side, I had never shot it before. Take the numbers as you will with that in mind.

So, looking at the numbers, for 10 shot groups 4/1.5/1.25 and 2.75/2/1.5 it appears in my mind, that there is a definite performance difference here with SPP doing worst, SRP coming in second, and SPM definitely winning. Looking at the 8 shot "best of" groupings, the numbers are 2/1.5/1.25 and 2/1.5/1 so although the group sizes tightened up, there is still a clear performance difference of the same order. In either case, it appears that for my particular carbine, the SPM primers were the clear winner.

So, looking at the numbers for 10 shot groups 5/5/6.5 and 7/3.5/3 The results are more mixed. In this case, it would seem to indicate that I suck more, or the powder/primer combination have noticeably different results. So, it's hard to pick a clear winner. Averaging those all out it's almost a tie between SPM/SRP with the CCI 500 SPP's pulling up third again. Looking at the "best of" grouping the numbers are 3.5/4/5 and 7/3/3. So very interestingly they match the trend of the 10 shot groups. Really, the only way I can think to determine a winner here would be averaging the 10/8's together and that comes out as:
SPP - 5.5" average group
SRP - 3.875" average group
SPM - 4.375 average group.

Based on that it would seem that SRP would be the winner, but the SPM was a very close second place --- close enough that I would think this comes down to my performance rather than anything statistically significant in reality.

Considering the absolute best groups together between rifle and pistol were the combination of 4.7 over the SPM, were I to be doing a giant batch, that is what I would likely go with, and personally not have concerns about safety. More testing would be needed and I still have 30 rounds separated to do more --- probably with a different pistol that I've worked on more.

Some other notes:
1. I didn't do a chrono test because I didn't want to screw with it honestly. The one I have (the Magnetospeed V3) rather than in a cramped stall, and doesn't work on pistols anyways.
2. I did capture at least two pieces of brass per group fired to check for signs of pressure, but never saw any warning signs in the slightest.

Anyways, long report, but I hope that helps.
TL/DR:
No, I did not see any noticeable POI shift.
Accuracy wise, SRP/SPM appears to generally perform better than SPP in both guns.

I've been reading up on similar alternates (Using SPP in subsonic/low pressure Blackout).
I read a post on the Brian Enos forum that according to CCI CS, SPM and SRP are the same thing. Same material, thickness, charge, shape and size.

Awesome report! Thanks for posting. Makes me wish I hadn't traded off that brick of small pistol magnum primers a few months back! I honestly don't even remember what I traded them for!

Shooting competitively during many shortages of primers, bullets, and so on over the years, I've found that primers can make a difference in precision shooting, but not so much in short range pistol or rifle. One just has to watch the pressure signs and load accordingly.
Great report OP.

I've been reading up on similar alternates (Using SPP in subsonic/low pressure Blackout).
I read a post on the Brian Enos forum that according to CCI CS, SPM and SRP are the same thing. Same material, thickness, charge, shape and size.
Click to expand...

@mouthpiece linked me to a great video on the subject the other day when we were talking about this:

In the video a commercial reloader is doing some extended tests regarding pressure and doing some chrono stuff. The pressure stuff was really interesting as I have no way to measure that, and I think it'd be pretty cool to know more on that side. The video is definitely worth watching and came with results that back up what I saw --- not any real difference in pressure or velocity. I'd expect POI shift in the case of velocity, and more kick in the case of pressure. I didn't mention it above, since recoil is such a subjective measurement, but I couldn't tell the difference between any of the loading on that front. If anything it seemed oddly like the higher 4.7 grain load felt softer than the 4.5 which I thought was weird.

Definitely some good resources out there on the subject, but I'm of the type that I really like to trust but verify. It makes me more knowledgeable doing some homework on it, and makes sure that it is true for my loads and guns.

This is a very timely post. As you mentioned a lot of us reloaders are struggling with substituting primers . Thanks for doing this detailed testing and sharing your results with us.
Last edited: Jan 17, 2021

A few months back just for the heck of it I tried substituting SRP for SPP in my .357 Mag revolver, most but not all fired and I did have light primer strikes on all of the 86 rounds I loaded.

On a side note, I recently (this week) did some time consuming reloads in 9mm, meaning I cast the lead bullets in 124 grain .356 dia, I powder coated said bullets, I "reloaded" the primers in the way that I think works for me, & then put everything together with Tightgroup powder. I'm not sure if my process would work for Small Rifle Primers, haven't tried dound any rifle loads yet, & not sure if I will, but so far, it seems to work with standard pistol. My first big batch, 50 rounds, you can see the dents in the primers that I have somewhat flattened out for my reloading process.

When I shoot these, I'm going to shoot on paper targets & keep a record of the consistency & reliability percentage & let you see the results. 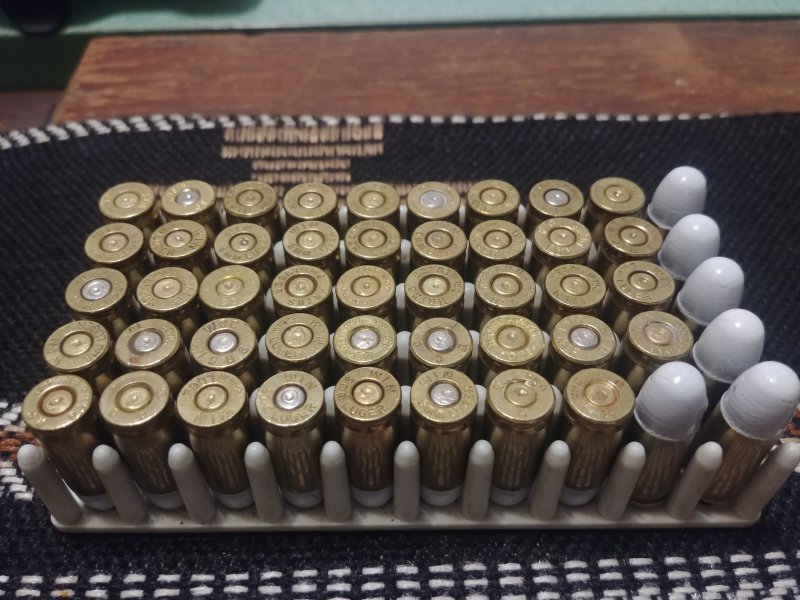 Rez, this is a current topic of discussion over on Cast Bullets; you should post your results there too...
http://castboolits.gunloads.com/showthread.php?416818-Small-Rifle-Primers-in-Small-Pistol

I may need to redo that test.
I have read the 400 and 550 are the same but they are not.
When I personally contacted CCI they said they were not the same.

Others have contacted CCI and were told they were the same.
Like many here do your own testing.