The Heavy Weight Champion of the World, Leon Spinks, has fallen

I grew up loving boxing. It was a time of great heavy weights. I remember watching boxing on Wide World of Sports in my dad's lap. Same with Friday night Boxing on tv.
When I grew up, there be Giants.
Leon Spinks, and his brother Michael, were both Olympic gold medal winners. Spinks soon went pro and had natural skills that were amazing. Couldn't understand a word he said, mostly, but his skills were spot on. I remember watching him slay a giant, Ali. I was in college and watched it at the Elks lodge on tv. I was working for a vending company and one of their pool tables was having an issue. I made the call late because they (Elks) would have the fight on and I knew it (not sure I fixed the table or not). I was shocked when Ali was being out scored. Giants are never meant to fall but time is time.
Years later, I was in Tulsa at the Adams Mart hotel for a conference when I went down to the bar for a drink. It was fight night in Tulsa and they had a boxing card for charity down in the basement. I went in and saw Leon Spinks surrounded by some asshats buying him drinks . I watched as I was ordering and it was clear the tall redneck was taking the most fun out of making the most fun of Leon. This guy was Heavy Weight Champion of the World. This guy won a gold medal. This guy beat Ali. He deserves respect. Like an idiot I went inside the group and asked Leon if I could buy him a beer. This is before cellphone cameras. The big Asshat and buddies didn't like it and I'm sure I was going to get my ass beat. I didn't care. I got him to a table and started talking to him and said order what he wants as long as he wants and I'd pay. I told him how much I respected him and watched him fight. It was almost impossible to understand him then too but better than when he was on TV. Asshat came over and I told him F off and I know what I was willing to do did he? About that time his keeper (that's what I say and will explain later....it's not a rub), came in and I explained what was going on. He thanked me and said he'd cover my tab. Then he told me this story.
Fight night promoter had been looking for Leon for a while but no one knew where he was. Don King and everyone in his family had robbed him blind and when they found Leon he was living under a bridge in Kansas City and painting houses to buy booze. They took him in as a celeb to present at their fight night fund raisers. Paid him well and had a guy (a keeper) stay with him 24/7. keeper because he kept him from having this kind of thing happen). I noticed the hands on the Champ and they were like blocks of cement. The repeated punching had made the bone growth only a fighter would have. He also looked like he could climb in the ring right then.
He was as gentle as a lamb and between the kid and me, I could understand everything he said. He wasn't bitter or depressed. He just tried to be a good Christian and help anyone he could. He thanked me for the nice things I said to him. He and I knew, if he wanted to, he could have cleaned the room with asshat and his buds and not put down his drink.
Just didn't want his passing to go un-noticed. See ya champ. You won that round. 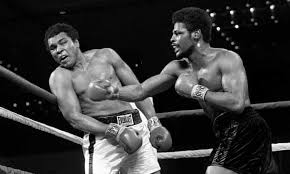 Thanks for sharing. Quite a story. I hadn't heard of his passing, so I'm really glad you posted.

My dad was a boxing fan as well.
I remember him talking about Ali & Foreman.
I used to sit with him as he watched Spinks, Leonard, Holmes, Duran, Hagler, Hearns.
Seems like a lot of the old giants are moving on sooner than expected.

I saw the fight where he was given the decision over Ali as well. There was a bit of controversy over that whole situation.

But yes, the man did have skills. They don't give out gold medals willy-nilly.

I was a Joe Frazier and George Foremen guy when I was a kid. Frazier was great. Old navy form of boxing. Take 3 shots going in low to get that one shot inside. Those were real men

I watched all the old fights back in those days before pay per view. I will always believe Larry Holmes was the best heavy weight .

Profreedomokie said:
I watched all the old fights back in those days before pay per view. I will always believe Larry Holmes was the best heavy weight .
Click to expand...

Homes, Foreman and Fraizer were unreal. Such a great time for boxing. Even in the lesser weights like haggler and herns. Probably the greatest fight in history.
M

I thought Butterbean was the world champ.

Sent from my LG-H700 using Tapatalk

Sad to hear of his passing.
L

Yeah, Boxing is not what it used to be.