Going to the doc this morning, stopped at a light and there was a pickup next to us marked Zombie Disposal Unit or something along those lines. Was that one of you guys? Fun truck.

I've seen a hummer or jeep that had the same markings running around. Instead of some zombie disposal looking people in it out popped this goofy kid and a girl with tattoos up both arms. Both so skinny you could jerk 'em through a keyhole. I think the zombies have a fighting chance, except for a food source. Probably not a whole brain between 'em!

I’ve seen him around. He lives a couple blocks from my shop.

We may need their number...

Nevermind, I see you said pickup. The guy near my shop is a black and white Ford Explorer. There’s a logo on the door that says ‘zombie response team’ or something like that. 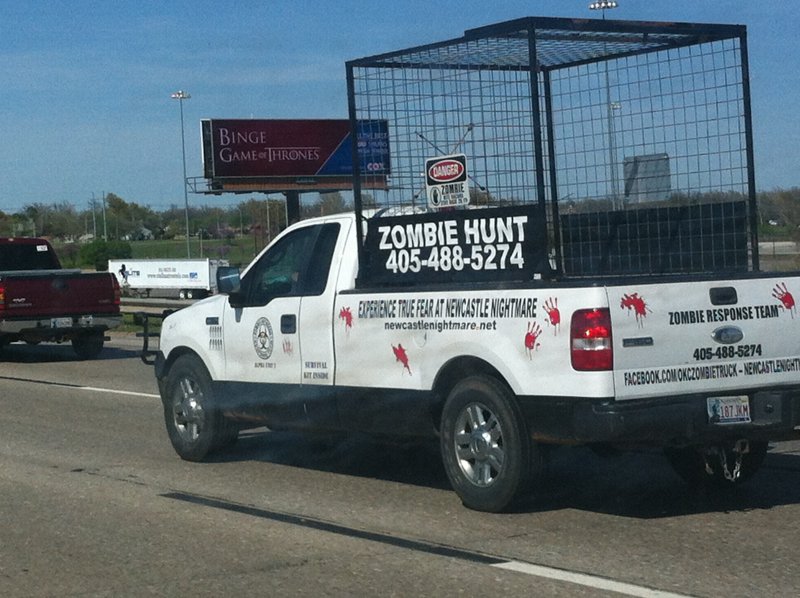 Here is one of them working at night while y'all are sleeping.

I’ve seen that guy around too. He usually has a couple zombie maniquins in the cage
C

Interestingly, "zombies" can exist. Not the BS movie kind, of course, but a scary-as-hell real world version is possible. A bacteria found in Scotland and a blood-borne parasite in India each have some symptoms that mimic "zombie" behavior. Any person contracting both at the same time would look and act like a monster - skin boils/lesions, poor eyesight, darkened/deteriorating skin, slowed physical reaction times, severe anger/aggression, and total lack of fear. They can be killed, certainly (and 90+% of them will die naturally, within two weeks of infection - no effective treatment currently exists), but of course there is no "re-animation from the dead" aspect. Eerily, though, both bacteria and parasite are spread through open wounds, including bites (even human bites).

This is really not news... the bacteria was identified by Royal Hospital in 2015, and is well-known to the scientific/medical community... and India's largest hospital has been fighting the parasite for the last two decades.

I'm an author, and am writing a book about this subject. It should be published by about mid-March.