A little retro in my old age...

After a few weeks of shooting and carrying my new revolver I thought I would put down my current thoughts on it. First I should explain that I formerly was a long time S&W fan. I’ve owned many good ones since I began with them in the early 60’s and still own a couple but have not carried one routinely since the 90’s. My two all-time favorites were a 3” model 65 and a 4” 629 Mountain Gun. I drifted away from S&W with the Clinton Agreement and advent of the internal lock. I tried for a few years to get accustomed to the IL and even replaced the lock with the “plug” on a couple of what would have been very nice revolvers. To this day seeing an IL on a S&W revolver just turns my stomach. Sorry, current S&W fans.

I recently decided to return to carrying a revolver and was looking very seriously at the 640 Pro which has no IL. I kept hesitating because I feel it looks a little “Texas gaudy” with the short fluted barrel and the (probably very good) sights on that model. In the meantime, I was aware of Colt getting back into the revolver game with the introduction of their new Cobra model. I did like the size of it but had little interest in the 2” snub. Also, the finish on the Cobra turned me off. To me the 3” 65 and Ruger Security Six were the perfect size carry revolvers. Everyone had different tastes, but that’s mine.

With the introduction of what they call the King Cobra my interest peaked a little. Seeing one in person later made up my mind for me and I ordered one. I paid about $50 more than I would have for the 640 Pro (well under MSRP.) Now that I have carried and shot it for a few weeks here are my current thoughts on the handgun.

Pros: The size is perfect for me. In between the size of a J frame and a K frame with a 6 shot cylinder. The closest Smith is the 3” model 60. The fit and finish (better than the Cobra) is the equal of any smith I have ever owned, including Performance Center models. The trigger is light years better than my J frames and is equal to my 65 and Mtn gun which had been worked over by Andy Cannon many years ago. It carries perfect for me IWB which is my preferred mode.

Cons: I wish they had named it something else. It is not even similar to the original King Cobra. The brass bead front sight doesn’t work for my old, tired eyes. I can see it outside pretty well but at an indoor range it sucks. Fortunately, the sight can be changed easily by the user, which I will do as soon as Brownell gets the night sight back in stock. The stock rubber grips fit my hand perfectly but I prefer wood or G10 for carry so I have a set of VZ on the way. The smooth trigger is not bad but I would have preferred a slightly wider one.

I’ll continue shooting it to decide which is my preferred carry round. Right now it is the GDHP .38+P short barrel or the HST Micro. Both are slightly more accurate that the .357 Gold Dot short barrel. The HST is slow to reload so I’m carrying the .38 short bbl. Full bore .357 loads are brutal in this small gun and will not be shot in it anymore. I’ve shot many other brands and bullet weights and will continue to do so. I’m not a big fan of the “FBI” load due to potential over penetration and barrel leading in my old 65. I plan to look at the Buffalo Bore version which is a very soft gas checked load.

I’ll put a pic up after I get the VZ grips on it. Right now it looks just like the Colt catalog photo. I like it. 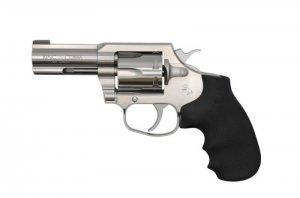 Very nice! I always thought that a 3" barrel was the pefect length for a combat revolver...

I was seriously thinking about the new King Cobra, but went with a S&W Model 610 4" instead. If it came out in 4", then I'd give it a long serious look. But the 3" is just shorter than I prefer.

Tell you what: I'm planning to have an ENS up at my place near Medford before too long, (the ones I had planned earlier this year were rained out) so why don't you bring it up? I've always liked Colt DA revolvers, and was happy to see Colt making them once more.

Might do that but planning on some serious time in my old Colorado stomping grounds during Summer the warmer months.

Best revolver I've ever owned was a 3" Model 66 with boot grips. That gun shot well and just melted away in an IWB holster.

My 3” 65 is the one gun I’ll never sell. Unless you want it. You deserve one more than I do

gerhard1 said:
I was seriously thinking about the new King Cobra, but went with a S&W Model 610 4" instead. If it came out in 4", then I'd give it a long serious look. But the 3" is just shorter than I prefer.
Click to expand...

Those supposedly "in the know" tell me there will be a 4" with adjustable sights this summer. Colt is going for the personal defense crowd first.

Glocktogo said:
Best revolver I've ever owned was a 3" Model 66 with boot grips. That gun shot well and just melted away in an IWB holster.
Click to expand...

druryj said:
And you still carry it ... right?

Sent from my iPhone using Tapatalk
Click to expand...

No, I've pretty much gone 100% semi-auto. I still have a lot of affection for revolvers in general, but my Shield carries very well too.

D
Took out the Taurus M-76 the other day.