I mentioned receiving this scope a week or so ago, and someone asked to post a review once I shot with it. Took it out today, and I can't say I have a strong opinion about it one way or the other. It worked fine, and I think it's a good scope. Is it way better than my other scopes in the $100 to $200 range? I'm not certain, maybe... but here's my experience.

Let me say first that for some reason I have days when the vision in my right eye is not very good. Other days, it's fine. Today was one of the not very good days, so I could not get a really sharp focus in the scope, but I couldn't focus that well just looking without the scope either. So I just got it as clear as I could, which was good enough to see .22 holes at 100 yds on 24x pretty easily.

It has side parallax adjustment, which seemed to work just fine. It is marked for distance, so I just set it for 100 yds and couldn't see any problems with parallax.

It came with flip up scope covers, which was nice... the only issue is that when I adjusted focus, the flipped up cover on the eye piece interferes with the bolt operation. I'm sure there's probably a way to adjust that so it flips straight up, I just didn't figure it out intuitively and haven't done any research yet. It needs to be rotated though without turning the adjustment ring.

Adjustments seemed to be immediate and precise. By that, I mean if you adjust four clicks it moves 1 inch at 100 yards. And it doesn't seem to do like cheaper scopes, where the first shot after you adjusts hit the old point of impact, then that jars something loose and the next shot moves to where you intended to adjust. If that makes any sense. It seems to move to where you adjusted without any bumping or anything.

I mounted it on a Remington 700 chambered in 22-250 that I haven't really gotten the accuracy out of that I think it should get, but it was better with this scope than any other I've had on it. Some of that is probably that I used better quality bullets than the cheap bulk bullets I've tried before. I'll add a pic of the last target, which is not extremely impressive... but I can't get better than 2-3 inch groups with ANY of my rifles, so I think I'm probably just a 2-3 moa shooter. In any case, I sure don't think the scope is a problem.

All of the groups are 10 shots... the best one is probably just under 1.5 inches, the worst is probably a good 2.5 inches. I will say that the wind was gusting significantly, and that probably didn't help. I wasn't waiting for the barrel to cool, and didn't clean the barrel at all so that may be an issue. Groups seemed to get a little worse the more I shot, so it could be due to heat or dirt.

It's a good scope, and I think a good pairing with this rifle, if you can find a deal on them you can get one for around or a little over $200 and it's probably worth that. I haven't tried it in fading daylight or anything, but it seemed plenty bright on an overcast day, so I assume light gathering is pretty good. It feels solid in every way, and the optics were pretty good even though my right eye was a little blurry. I sure don't regret buying it, I think it makes this rifle a viable varmint rig.

Hope this is helpful if anyone is interested in a Riton scope, feel free to ask if there are any questions. 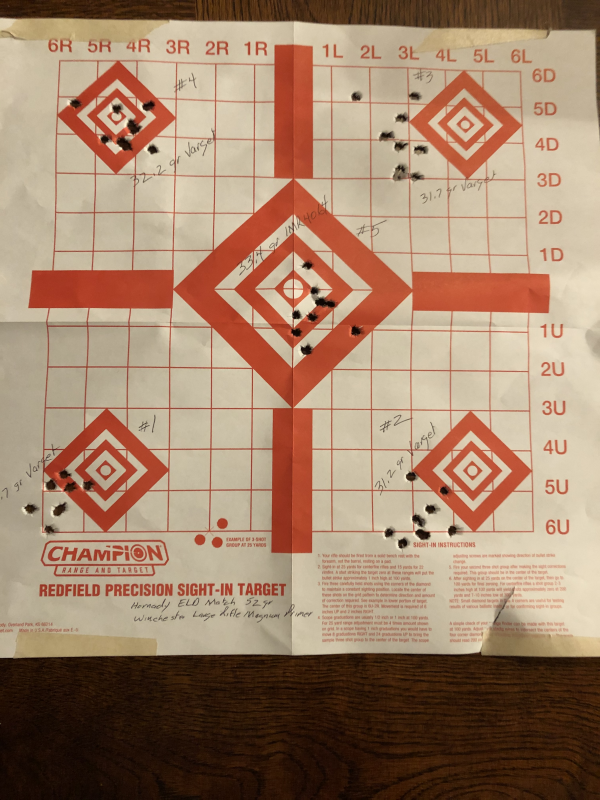 I'm the one who asked and I thank you for the range report.

Just pull the flip cap straight back/off and then put it back on how you'd like.


Looks like you are shooting a 52gr eldM. What data are you using? Those charge weights look pretty low to me.
Last edited: Nov 20, 2019

I tried pulling it off but it looked like the whole eyepiece was moving so I stopped. I need to look at it closer.

I got the load data from Hornady. The first group in the lower left corner was the starting charge weight they sent, and I added .5 grains on the next 10 rounds. The last group (center) is IMR4064 because I ran out of Varget.

Is that a Rem VTR which has the triangular barrel?

Couple things I was thinking while reading your post? I agree with @Cowcatcher pull the cover strait off. Also did you adjust your eye piece? Couple ways you can do it. Look at a blank light colored wall and adjust it till the reticle is nice and sharp. Or while empty point it at the sky away from the sun with nice blue back drop and adjust till reticle is sharp.

As for parallax adjustment. In less expensive scopes especially those numbers can be off and sometimes way off. Like 100 yds is clear when it shows 150-200yds. So don't feel bad adjusting it.

Where you shooting off a bench?

I have been seeing this brand show up here and there recently. I had never heard of it before.

Cowcatcher said:
Is that a Rem VTR which has the triangular barrel?
Click to expand...

Yes, it is. And integrated muzzle brake. It's kind of marketed as a varmint rifle. It seems like it should shoot MOA, but I haven't gotten that yet, at least not consistently.

blake711 said:
Couple things I was thinking while reading your post? I agree with @Cowcatcher pull the cover strait off. Also did you adjust your eye piece? Couple ways you can do it. Look at a blank light colored wall and adjust it till the reticle is nice and sharp. Or while empty point it at the sky away from the sun with nice blue back drop and adjust till reticle is sharp.

As for parallax adjustment. In less expensive scopes especially those numbers can be off and sometimes way off. Like 100 yds is clear when it shows 150-200yds. So don't feel bad adjusting it.

Where you shooting off a bench?
Click to expand...

Okay, I did get the flip up lens cover off, and oriented it correctly so thanks guys for those suggestions. Not sure why it looked the first time like the eyepiece was coming with it, optical illusion I guess and I was messing with it at the range and wasn't in the best position to mess with it, so I just stopped and decided to research more. Figured I'd get some suggestions here, I've never used flip up caps before. It's fixed now.

I adjusted the eye piece as best I could, given that the right eye wasn't working that well. They call it "fast focus", and it was indeed pretty easy to focus, to the extent I was able.

I couldn't detect any parallax issues with it just set on 100 yards. I didn't really try any other distances or try to fine tune it, but it seemed fine.