Okay let me begin by saying I am very new to reloading and I know I still have a LOT to learn, but I’ve read that a rifle rated for 223 only cannot, or should not, be used to fire 5.56 ammo. In my case my rifle is a 5.56 so that is not an issue.

My question involves reloading for the pressures obtained when shooting 5.56 ammo compared to a 223. When looking at Lyman’s 50th anniversary handbook I see only how to reload for 223. I then referred to my Hornady Handbook which breaks down, not only, how to reload not only for 223, but a 223 Service Rifle and 5.56 too. My confusion arises when I compare Lyman’s manual to what I’m seeing in the Hornady’s manual.

For example, a 223 using a 75 gr. Jacketed A-Max and Varget powder the Lyman manual tells me the suggested starting weight of powder is 23.0 gr. with a maximum load of 25.6 gr.

Which brings me to the crux of my question which, other than curiosity I really have no idea why I’m asking since it doesn’t effect me, but it really is nagging at me so I hope someone here can offer some insight. Obviously the data contained in the two manuals overlap so why wouldn’t the maximum load of 25.6 gr found in Lyman’s manual deliver pressures equal to 5.56 NATO? And wouldn’t someone using a rifle rated for 223 only experience potential problems?
Last edited: Feb 26, 2022

Not sure but you may want to look at the volume difference between the 223 case and the 556 case . Could be do to case thickness in the 556 you can only get that much Varget in the case. 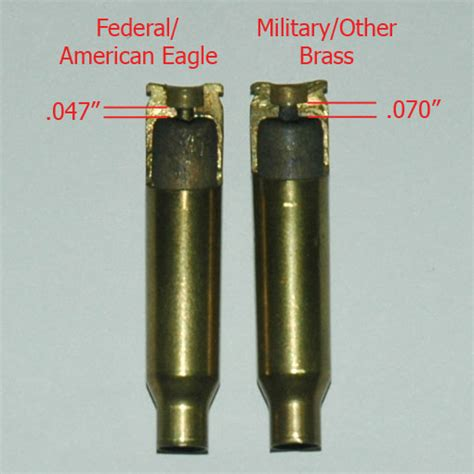 I have 2 .223 rifles and I have shot 5.56 and .223 and but neither of those store bought calibers can match my reloads in accuracy or drop.
My loads kick harder than either of them knowing kick is not a positive sign of pressure.

I believe original 5.56 was rated in CUP and tested that way and the .223 was tested in PSI.

I actually tested different primers to fail and pressures were very high.

The case volume is less on a 556 due to the case being thicker than a 223 so it will build more pressure with less powder than a 223 with the same volume of powder.

I appreciate the info y'all. Thanks

I have a 5.56 and a .223. Factory loadings of both calibers have been shot in both rifles, with not problem.

For my reloads, I used .223 brass only. I separate the 5.56, due to less case capacity. Crimped primers influence the decision, also.
U

couple videos here that are very interesting.
Dealing with different head stamp and same load with velocity and accuracy. .223/5.56

You are being redirected...