Sunday I had taken my youngest grandson down to the range for his late but 1st shooting lesson. He's 10 but small for his size. I have a Crickett .22 that I got when the oldest grandson was small enough for it but I've never been happy with the sights on the darn thing and currently finding a scope and mounts for it is a no-go. Youngest wasn't having much luck with the Crickett, mostly due I believe to the poor quality sights. I put him on my scoped Henry .22 and he managed to ring the 8" plate 10/10 from the bench at 25 yards off a sandbag. The Henry is just too long for him to properly manage though.
Looked for a Scope and mount for the Crickett I could find a mount but no soup on a scope I would put on it.
Got to get the tykes shooting.
Adapt. Improvise. Overcome!

I had seen several of these on the rack at my favorite gun store a couple of weeks ago but only paid them a passing thought. I had watched a handful of youtube video reviews on them and they were all pretty positive.
I've got a M&P 15 Sport II that I really like and have had zero issues with so based on that and my irrational fondness for S&W stuff I decided the grandkids needed a new training tool.

My range is wet and muddy today so I only ran 100 rounds of mixed ammo through it, top shelf stuff to bargain bin stuff and it didn't miss a beat. The S&W branded sight was easy to zero, managed it in about 6 rounds off the sand bag. This was my first time using a red dot sight and I'm pretty solidly hooked on the concept.

It came with 1 25 round magazine and I picked up a 2nd because you can't have just one. The magazines are a little pricey at $24 a copy and are proprietary. I'll likely pick up at least a couple more just to have them.

This model also did not come with "iron" sights so I will be adding a set of Magpul flip up sights to it in the next week or so.
The forearm is Magpul Mlock compatible. I picked up a front sling mount for it and may add a forward grip.

All controls are fully AR platform compatible, safety, charging handle, bolt release and magazine release, so I think it should be a pretty good AR training platform at a much lower cost per round.

It was just plain fun to shoot. Light, easy to handle and the red dot sight made for quick target acquisition when switching targets. 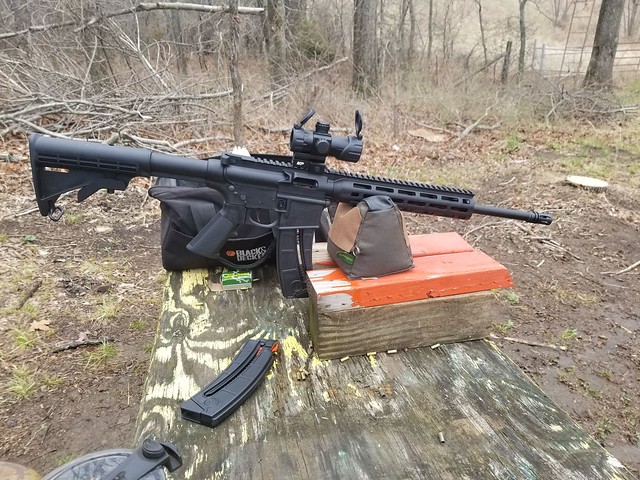 Good review, Larry! It sounds like it's going to be a real winner.

Roadking Larry said:
It came with 1 25 round magazine and I picked up a 2nd because you can't have just one. The magazines are a little pricey at $24 a copy and are proprietary. I'll likely pick up at least a couple more just to have them.
Click to expand...

One thing I'll definitely advise is to stick with the S&W magazines when you buy extras. Plinker Tactical makes one for the 15-22 and I had a couple of those and they were the absolute worst magazines I've ever used. Jammed all the time and they were a pain to load because they don't have the side button that the S&W mags have.

One of mine and my grandsons favorites to shoot.

When I first got mine I was a little concerned about the plastic receiver, but no issues after thousands of rounds. Put a Sparrow on it and you’ll have a backyard varmint shooter as quiet as a pellet gun. The one gun that makes everyone giggle.

Cool! You will continue to like it. I’d encourage anybody who is interested in the M&P 15-22 to go ahead and get one.

I’ve had mine for a couple years now. I love it! Very very reliable. Much more reliable than my old marlin model 60 with much less care and cleaning. I only run the S&W mags, they are great. It can be ammo picky.. mine doesn’t like federal 40gr solid. But it runs fine with 90% of what I feed it

I set mine up simple with a sling, cheap red-dot, and a compact pistol light mounted. It is my favorite night time varmint buster! (Rural area) Chicken coop invaders don’t stand a chance.

I don't own one, but have been around plenty at steel challenge matches. Solid rifle and very reliable. Year of fun ahead of you.
C

I’m looking for a .22 rifle to teach my son with. Would this be a better option than the 10/22? Im a planner and want to start looking.