THAT Gurl said:
Wow the things a girl misses when she's feeling off. I slept like the dead though. Whew ...
Click to expand...

collected up about 25 shingles ripped off my roof throughout the night (Lawton) been in Lawton since I got out of the military here in 73 been through a lot of these northerner’s but this one was wicked.

This is from Mesonet Friday night as the front was coming through ... 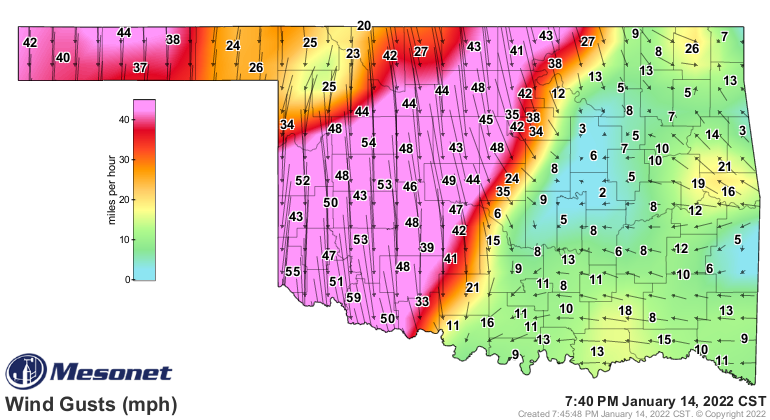 wawazat said:
I truly love that part of the country, but man it is a completely different kind of cold up there.
Click to expand...

I had a 68(?) Bel Air I drove to school in early 79 when I lived in Casper. It had been brutally cold for weeks...between -20 and -40...and of course very windy. I parked the car on the street. Went out to start it one morning...it started fine because I had it plugged in for heat. But when I got out and shut the door every piece of glass on the car shattered except the rear glass.

I had already enlisted in the AF and was only a couple months away from leaving for basic. I replaced the windshield but just put plastic over the others. Managed to drive it until late spring. About two weeks before I left I pulled up to stop sign in town. The car ran great but the transmission was slipping really bad. I'd press the accelerator and the engine would rev but the car wouldn't move. Eventually it would slowly start moving. Well, this time it didn't. It just wouldn't move. I got out of the car and left it running right there at the intersection. No one ever called me about it or anything. No idea what happened to it.

It wasn't the wind nor an earthquake, I had an all meat pizza for dinner and boy did it make me gassy.
R

I found stuff in my yard I dont know where it came from LOL.