"A grim Independence Day weekend in Chicago was marred by violence, with at least 95 people shot and 16 dead" 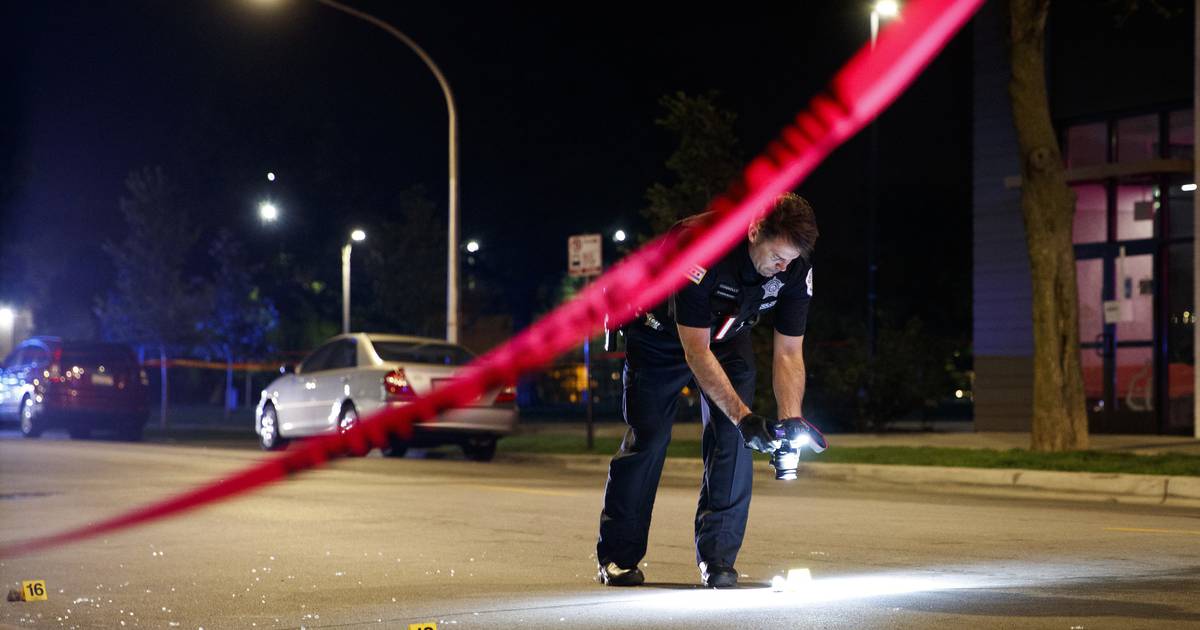 At least 108 people were shot in Chicago during the long Independence Day weekend, according to Tribune data.

At least 95 people were shot in Chicago during the long Independence Day weekend, including two police officers; a 6-year-old girl and her mother; and a group of six people early Monday in the Washington Park neighborhood.

In all, at least 16 people died from injuries suffered during the shootings that spanned from about 5 p.m. Friday to 8 p.m. Monday, according to police.

The Washington Park shooting left two men dead, two women injured and a 12-year-old girl and a 13-year-old boy with gunshot wounds. They were in the 6100 block of South Wabash Avenue when someone drove past, opened fire and fled.

Two men, ages 26 and 21, were pronounced dead at University of Chicago Medical Center. A 12-year-old girl was shot in the buttocks and critically injured; a 13-year-old boy was shot in the hand. Both were taken to Comer Children’s Hospital. In addition, two women were shot and authorities listed them in good condition.

Most recently, just before noon Monday, a 33-year-old man was critically wounded in the Jeffery Manor neighborhood, police said. He was in the street in the 9700 block of South Merrion Avenue when someone fired shots from a passing vehicle, striking him multiple times. He went to Advocate Trinity Hospital in critical condition.

About 9:40 a.m., a 41-year-old man and a 23-year-old woman were wounded in a drive-by shooting in Chinatown. Both were in serious condition at Stroger Hospital.

About 9:15 a.m. Monday, a 34-year-old man was killed in Little Village. Officers went to the 3400 block of West 26th Street in response to an alert from ShotSpotter, the city’s gunshot detection system, and found him unconscious in the driver’s seat of an SUV that had crashed into a parked car. He had been shot multiple times and was taken to Mount Sinai Hospital, where he was pronounced dead.

A 25-year-old woman was shot in the 7300 block of South Lowe Avenue in Englewood about 5:45 a.m. Someone fired shots from a gangway across the street as she was standing on her porch, police said; she was shot in the hip and listed in good condition.

Just after 5 a.m. Monday, a 27-year-old man was shot near Riis Park in Belmont Cragin. He was shot in the upper chest and back; the circumstances of the shooting were not immediately known. His condition was stabilized, police said.

A 39-year-old man was shot in the hand in the Englewood neighborhood when someone fired from a passing car in the 5800 block of South Peoria about 3:25 a.m. He went to Holy Cross Hospital in good condition.

About 3:10 a.m., two men were critically injured in a shooting in Logan Square. They were on a porch in the 1700 block of North Albany Avenue when they each suffered multiple gunshot wounds; further details were not immediately available.

About 2:30 a.m., a 27-year-old man was shot while driving in the South Deering neighborhood. Someone in a passing car fired shots that struck him in the leg; he crashed into a parked car and then a house, police said. He went to University of Chicago Medical Center in fair condition, and a woman who was in the car with him was taken to the hospital for a broken ankle.

Around 2:15 a.m., a man took himself to University of Chicago Medical Center with a gunshot wound to the leg. He was listed in fair condition. No other details were immediately available.

A man was killed and another was wounded in Lawndale about 2:10 a.m. A man in his 30s and a 62-year-old man were in the 1800 block of South Kildare Avenue when they were shot. The younger man was pronounced dead at Mount Sinai Hospital, and the older man was shot in the knee and his condition was stabilized.

At 1:30 a.m., a Chicago police commander and sergeant were shot while trying to disperse a crowd in South Austin, police said. Someone fired into the crowd, hitting the commander in the foot and grazing the sergeant in the leg. Both are in good condition.

At 1:10 a.m., a 41-year-old man was shot in the 4100 block of South Wells Avenue in the Fuller Park neighborhood when someone opened fire from a passing white truck. He was shot in the abdomen and listed in critical condition.

Just after 1 a.m., a 6-year-old girl and her mother were shot in the 100 block of East 119th Place when someone in a gray SUV fired shots. The girl was shot in the hand; her mother, 43, was shot in the back and went to Roseland Community Hospital in fair condition.

About 12:45 a.m., a 25-year-old man was shot in the arm in the Washington Park neighborhood. He told police he was outside in the 5100 block of South Indiana Avenue when he heard shots and felt pain.

Half an hour earlier, a 51-year-old man was shot as he sat on the curb in the 4200 block of West Carroll Avenue in West Garfield Park. He was wounded in the right thigh and listed in good condition at Humboldt Park Health.

About the same time, in the 3400 block of West Monroe Street in East Garfield Park, a 21-year-old man was shot in the leg from a passing car. He went to Stroger Hospital in good condition.

About 11:30 p.m. Sunday, a 29-year-old man was dropped off at Stroger Hospital with a gunshot wound to the leg. He said he had been shot on the sidewalk in the 1100 block of North Mason Avenue; he was listed in fair condition.

At 10:45 p.m. in Austin, three people were shot and then the gunman was wounded by a concealed carry permit holder, police said. The attack left a 45-year-old woman dead and three men wounded.

About the same time, a 49-year-old man was critically injured in a drive-by shooting in the 3000 block of East 79th Place, police said.

About 10:30 p.m., a 48-year-old man was in an alley in the 1000 block of North Leclaire Avenue when he was shot in the leg. He was unable to give further details to investigators, police said.

A woman and man were shot in a backyard in the 11500 block of South Front Street about the same time, police said. The woman, 34, was shot multiple times in the stomach. The man, 37, was shot in the lower back. Both went to Advocate Christ Medical Center in Oak Lawn.

At 10 p.m., police responded to Stroger Hospital, where a man was being treated for multiple gunshot wounds to the thigh. He was in critical condition and unable to communicate with police, so no details of the shooting were available.

At 9:55 p.m., three people were shot in the 100 block of North Francisco Avenue in East Garfield Park. A 37-year-old man was shot in the neck and listed in critical condition; two other men, ages 49 and 40, were shot in the feet.

About 9 p.m. in the 900 block of West 95th Street, a 35-year-old man felt a pain in his hip and initially thought he had been hit by fireworks, police said. He had in fact been shot, however, and went to Advocate Christ Medical Center, where his condition was stabilized. In addition, an 11-year-old child was at the scene and suffered a critical injury to the chest, but it was not clear whether that was due to a gunshot wound or some other injury, police said.

About 5:20 p.m., a 34-year-old man was shot in the Buena Park neighborhood, police said. He was in the 900 block of West Irving Park Road when someone walked up, pulled a gun and shot him in the right leg. He went to Weiss Memorial Hospital in good condition.

About 4:40 p.m., a 5-year-old girl was shot in the right leg in an alley in the 11700 block of South Normal Avenue in the West Pullman neighborhood. She was taken to Roseland Community Hospital, where her condition was stabilized.

Around 3:45 p.m., a 22-year-old man was shot in the leg in the 7200 block of South Bennett Avenue. He went to University of Chicago Medical Center in good condition.

At 2:25 p.m., two men, ages 28 and 33, were critically injured in a shooting in the 7400 block of South Western Avenue. They were driving when another car pulled up alongside and fired shots into their vehicle, police said.

Around the same time, a 19-year-old man was critically wounded in a residence in the 8300 block of South Shore Drive. Someone walked into the house and shot him in the face, police said.

At 1 p.m., a 29-year-old man was shot in the lower back in the 8800 block of South Escanaba Avenue. He was taken to University of Chicago Medical Center in critical condition.

If this keeps up!
I wonder how long it will take for the city Chicago's population to go to 1.

MR.T. said:
If this keeps up!
I wonder how long it will take for the city Chicago's population to go to 1.
Click to expand...

Then they can arrest him for murder.

With a 16% fatality rate, they must be either really good shots, or really poor shots. Or maybe just really lucky (for the victims) shots.
N

Yet, their mayor absolves herself of any culpability in the travesty known as ChiRaq.

Chicago Mayor Lori Lightfoot says that "99 percent" of her critics are racist and sexist. 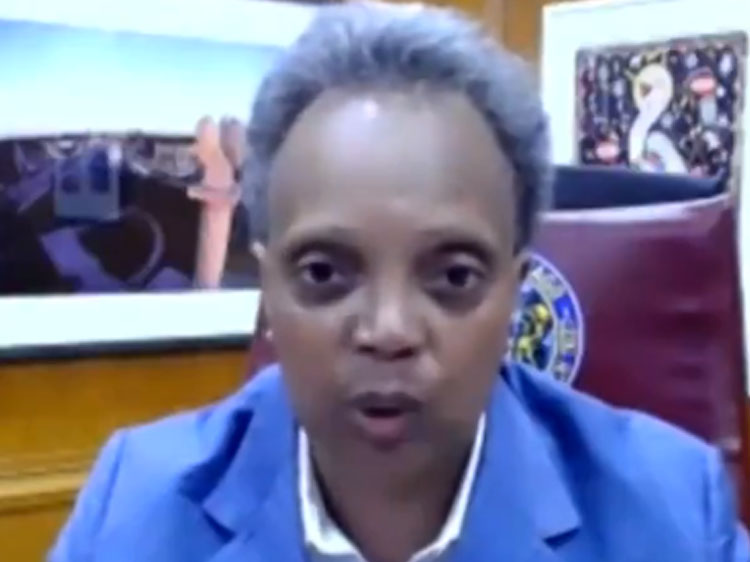 Chicago Mayor Lori Lightfoot: "99 Percent" Of My Critics Are Racist And Sexist

Chicago Mayor Lori Lightfoot reflects on her first two years in office on WTTW's Chicago Tonight. "About 99 percent of it, Lightfoot said. "Look at my predecessors. Did people say that Rich Daley held tea sessions with people that he didn't disagree on? Rahm Emanuel was a polite guy who was a...

Pay attention, children. This is what happens whenever a city, county or state cedes itself to Liberal Rule. Cf. Kalifornia, Oregone, Kolorado......
T

Sounds like they need WAY more properly trained, unarmed mental health workers to rush to the scenes of these drive by shootings.

That, and common sense gun safety laws passed in surrounding areas. I think we all know that Chicago would be a fantastic place if not for the easy availability of guns in neighboring areas.
T

Let's see pics of shooters. Maybe a map highlighting areas where shootings occurred. Perhaps we can analyze the combination of participants, neighborhoods and really focus on keeping guns out of those places.

Of course, it's probably random, with every stripe and hue of American equally represented, well....maybe White Nationalists may be represented more heavily, since we all know they are the biggest threat these days.

Either way, it will be twisted to further restrict rights on a national level because we all know the laws there are saving lives.

Shot and killed during a gun sell
2 3

Listen to these shot bitches cry…
2

I
A man we should never forget.