June has been a mother of a month. Here's to a better July

rockchalk06 said:
Beginning of May, we found a pretty narly leak in the master bathroom coming from the Jacuzzi tub thing. Made it's way to half the bathroom carpet and 5-6 feet of newly installed flooring in the bedroom. Killed the water supply to the tub, called a contractor and decided to deplete our savings and go ahead and redo the entire bathroom/closet/shower etc. It was the last room in the house we have not redone since moving in 12 years ago.

Job went ok. Thank God for me working from home. Very end of May all complete. Double shower with bench and drying area. Beautiful doesn't described it.


June 2nd I'm up around 0500. Walk towards the bathroom and water is seeping up from the tile in the bedroom. I start pulling tile until I find dry floor. Call the Contractor, and he shows up about 0730 along with the Plumber. New Plumber too, old one that worked for them is now "gone". After 4 days of drilling, cutting sheetrock, camera etc, they determine it's leaking from the outside of the house, into the dirt up through floor. I call BS. I cut a piece of sheet rock out to the back of the shower and see it leaking under the shower liner.
View attachment 283372

Head Contractor comes, overrides the guy and says "it's on us" They decide to not tear the shower floor up, and tunnel under. Ok, it's on their dime, so lets get er done. Plumber spends a week jack hammering, digging and fixing the pipes. House looks like a freggin drug house
View attachment 283374

When hooking up the new line, the old line in the slab bursts and the outside faucet thing bursts, leaking water into the bedroom. Rush job, break everything down and move it to the living room and dining room. New line has to be run.

Water is still leaking from under the liner. After all that, they end up tearing out the shower floor and discover the liner they installed under the concrete was not installed correctly.

Battle the insurance ID10T's for a full week. My agent is furious at the adjusters. I call their BS tell them they are dragging their feet as the Contactor is waiting on them to process the claim and are hoping we say screw it and proceed. I threaten to call a good friend at a local news channel and out of the blue, an adjuster shows up 3 hours later. Does his thing, two hours later, money in the account all is good. Contractor has the green light.

Lets back track to June 12th. Wife is out walking the dog. Stray comes up and starts messing with her and my little Yorkie. She picks Yorkie up, tries to get out of the area and ends up tripping over something. Busts the hell out of her phone, watch, knee, elbow, hands and chin. Some elderly gentleman (I'm going to call him an angel) sees this, jumps out and turns John Wick on the dog. Helps my wife up and calls me. I'm 3 blocks away and head out. Load her up, thank him about 50 times (wanted to thank him another 50) and head home. Never found the dog. If I do, I'm going to need bail money. Get her fixed up, cleaned up and calmed down. She's ok now. Phone and Watch taken to Apple Store, 60 dollars later, new phone, new watch. Apple Care does work sometimes.

Lets back track to June 5th. My wife in her 1 year old Explorer, has one of those mowing company trailers, drop an 8" blade, truck in front kicks it up and blows out the rear tire, gouges the passenger front door, passenger rear door and busts the tail light. Claim started, rental arranged and dropped at the body shop. This costs us 122 dollars out of pocket. Not a huge deal, but enough to raise my BP. Fast forward to yesterday around 1400 hours. Body Shop calls, Explorer is finished. She picks it up, gets to the very first stop light, sitting still and gets rear ended by some 20's something college kid on her cell. Girl admits fault, says she was on her phone. OCPD called, makes a report and gives us a case number. Claim started.


I'm beginning to think I must have stepped on a bug and altered a time line causing some planet to die and karma is biting us back.

Here's to a better July

Holy Moly time for a drink. got to get better from here!

dlbleak said:
Wow, what a PITA! Glad the house is on the mend and the Mrs is ok.
Click to expand...

montesa said:
So they probably didn’t build any pre slope into the pan before the liner.

I can’t believe they made that big of a mess of it. Very frustrating.
Click to expand...

You are correct. We noticed it right off the bat where water would stand after a shower on the north end. We had a squeegee we would wipe all the water to the drain and dry the floor each shower to keep it clean. I guess there was a bigger leak than we thought.

The Manager said he never inspected the final steps and that is why they are taking care of us. When this is all over between the higher end tile we went with in the bedroom and what insurance paid, we might be out less than 1500. They are trying damn hard and I am letting them.

I appreciate all the kind words guys. My wife is all but healed up now and luckily, both her and my son were only hit at less than 10MPH or slower.

Bedroom is coming well. Rock is all up and they textured the wall today. I am going to pay and have them paint the ceiling and go a lighter grey in the bedroom with a 50% lighter on the ceiling.

Liner and that water proof board was put in the shower today. Progress is moving along. 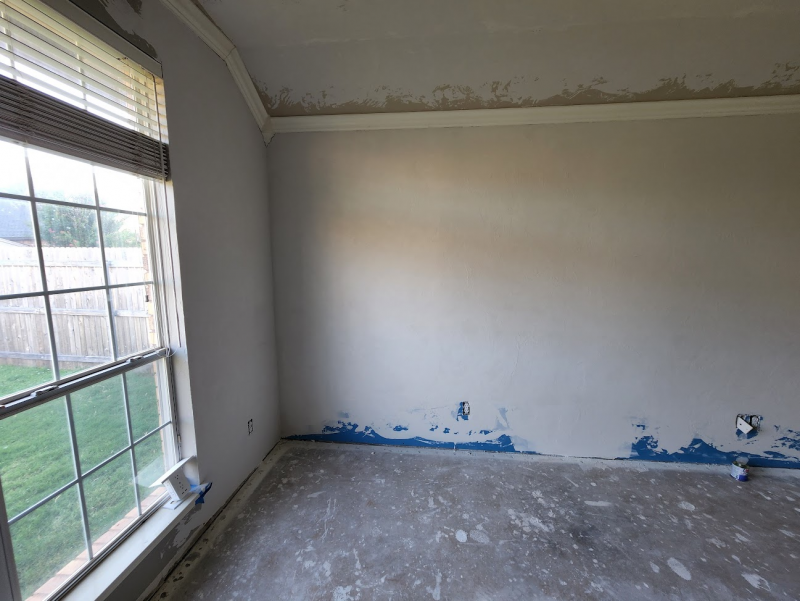 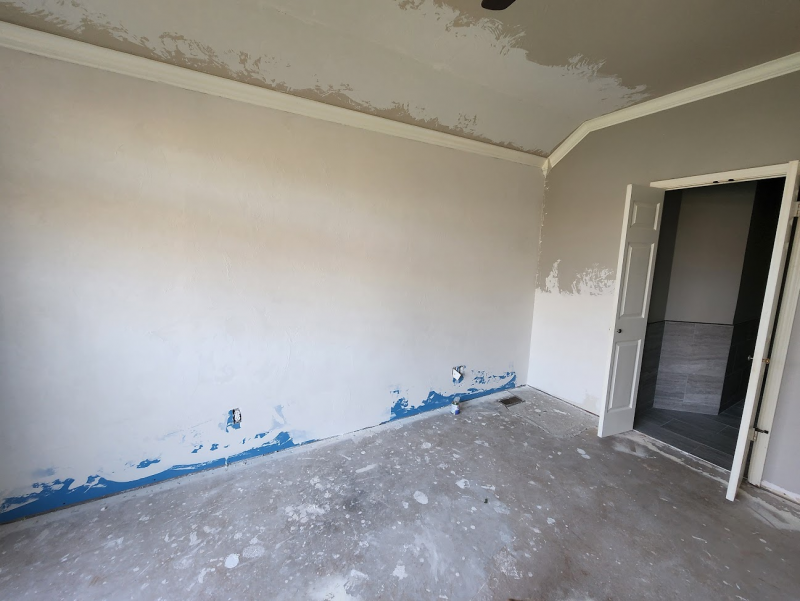 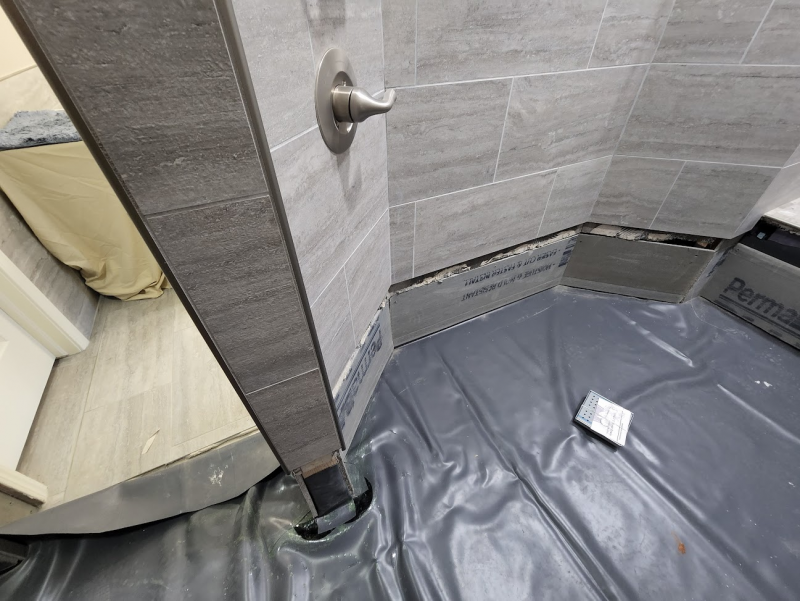 Gosh dang man, tough breaks all the way around, no pun intended.

Gotta be better going forward for ya!

Dang no luck at all in June. Hope July is much better!

I gotta know what life was like before June, sheesh!

Good luck, you certainly need/earned it!

Yeah, July's GOTTA be better for y'all!

Geeze! I'd say you've hit your bad luck quota for the next few years. Here's hoping for a better July. Glad everyone is OK.
M

rockchalk06 said:
I appreciate all the kind words guys. My wife is all but healed up now and luckily, both her and my son were only hit at less than 10MPH or slower.

Bedroom is coming well. Rock is all up and they textured the wall today. I am going to pay and have them paint the ceiling and go a lighter grey in the bedroom with a 50% lighter on the ceiling.

Maybe someone else can chime in but I don’t think that’s the right way either. This is the way I have always thought was correct. 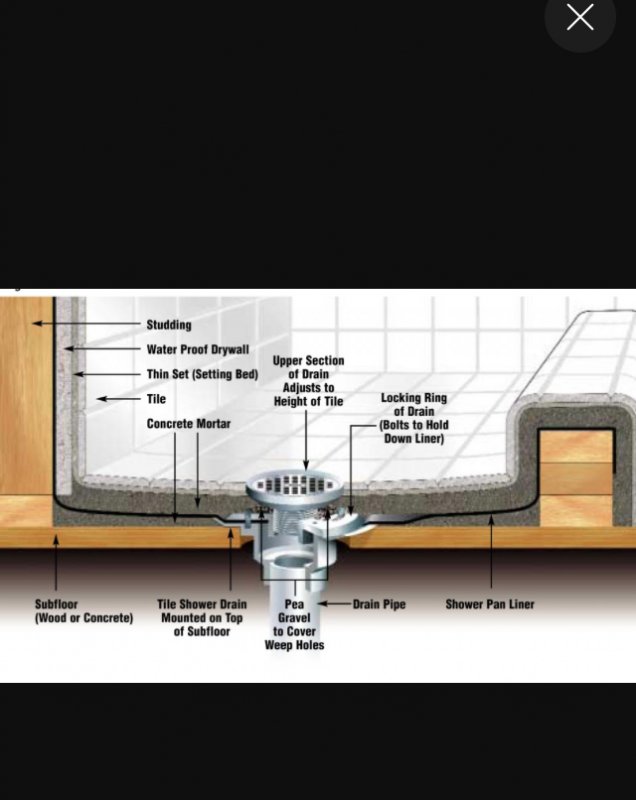 Yesterday was a water catastrophe but everything is installed now. Wife happy
2

Anyone here do #1 tree removal, stump grinding and #2 home remodeling?
2