Tell us your traveling troubles over your lifetime.

Back in the 1980's, one would have a hard time renting a car unless one was at least 25 and had major plastic. I had to have my mother cosign for me at age 22 to rent a Cadillac in 1986 to chauffeur a senior high-school boy at my workplace and his girlfriend out on a date for prom night . In the summer of 1995, I got out of the army in Germany and came back home stateside. I reserved a Lincoln Town Car with Hertz over the Skyphone on the plane. I had a big hassle when I'd arrived to pick the car up at 2 in the morning at the airport. It took about a half hour of arguing and even having to speak to the manager but I finally got into the car to drive home. I was age 31 at the time and did have major plastic but I had no stateside driver license, only a valid international one. Apparently, these airheads at the car rental agency weren't familiar with these. No running through airports on one's two feet (like O.J. Simpson from The Man, maybe) but running your mouth off trying to explain the validity of an international driver license. I had hard time once in Germany, circa 1994, getting on the airplane because the middle-eastern customs guy with the funny accent didn't undertand that a US military ID was acceptble in lieu of a passport.

Travel is especially difficult without a major credit card and you will be hard-pressed to rent a car if you are under 25. In 1999, at age 35, I visited some relatives out of state by commercial air. I was traveling with no major plastic at the time and did have a tough time finding a rental car agency that would get me into a car without major plastic. I finally found some fly-by-night agency to get me into a Kia econo car, not a Lincoln as I was hoping to find, sans card. I had a book of American Express Travelers Cheques then. I was waiting on my new credit card and a new debit card both to arrive in the mail following opening up a brand new bank account, but I could not postpone my travels to wait on the card. 10-12 business days.

Some traveling tips: avoid KIA campgrounds like the plague, use mom-n-pop ones or government agency ones...... avoid Motel 6 like the plague, try to find budget-priced independent motels if you can, generally cleaner and much more friendly, try to get a motel in town before 8 PM if you can, I once arrived in Kingman, AZ at 10 at night in early 2000, I asked the guy at the Motel 6 counter for the cheapest room available and he was rather crabby, I wanted to drive around town looking for another motel but I was too tuckered out ... you might just ask for the lowest-priced room available ... the word "cheap" brings out the monster in some people in the service industry, women seem to be more polite than men in many service industry jobs

Just drive your own car / truck!

Depends how far one needs to travel. Drive a car or truck across an ocean? You can't pack your own car onto an airliner. Also, what is your time worth?
Last edited: Nov 15, 2021

AlongCameJones said:
Depends how far one needs to travel. Drive a car or truck across an ocean?
Click to expand... 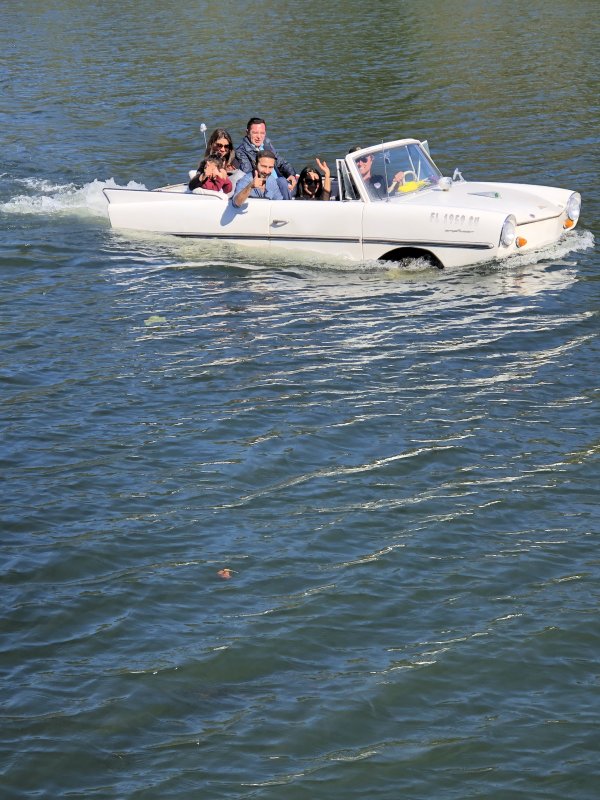 I have no plans to bow down and get a passport, so no worries to travel across any ocean.

As it seems, I do not think other countries honor my rights to carry a firearm, so no need to go!

If I feel the need, there is plenty of places to explore here in the good ole USA!

Those are cool, but it burns me up that they need a boat registration plus license plates.

My opinion is one or the other, the state should not get to milk you for both!

Saw one of the amphious cars while out on Ft Gibson lake many years ago. He was coming to a boat ramp at Whitehorn Cove and just drove off down the road. Pretty nifty. I saw an advertisement for a jet boat jeep a while back, but it was almost $70K. Thanks for sharing

OHJEEZE said:
I have no plans to bow down and get a passport, so no worries to travel across any ocean.

As it seems, I do not think other countries honor my rights to carry a firearm, so no need to go!

If I feel the need, there is plenty of places to explore here in the good ole USA!

Which is the number one reason I hated military service abroad the most.

...is that someplace where one has to sleep in a car?

As for KOA campgrounds, those are hit or miss. Wife and I have stayed in 6 or 8 of them in our RV travels and had very little trouble. The only one that was a hassle was one in Utah where the spaces were pretty limited in size. What with other RV's and the owner's vehicles parked in the way, I had to back out of our site to be able to leave.

Other KOA campgrounds, such as two in Wyoming, were great with excellent people running them.

KOA is what I meant, my bad typing or bad memory.

I've only stayed in one once. This was at Mount Shasta in CA summer of 2011. Hit or miss. I must have gotten the "MISS" one for sure. The young staff was totally rude, flakey and punk-a$$ kids. The [email protected] janitor opened the bathroom door hard and hit me while I was exiting. As they say, one bad apple spoils the whole barrel. I swore off KOA like Big Three automobiles and smoking.

Mom-and-pop camgrounds, on the other hand, are often run by older people who in my experience were nice. The older woman who was camp master at one state campground I stayed in was very sweet. I hate dealing with businesses run by punk-a$$ kids.

KOA is like some cheesy corporate enterprise. It's like the McDonald's of "campgrounds". Independent smaller businesses are often much nicer toward customers. The local taxicab outfits in Lawton, OK, however, are just absolutely horrible these days which is why I have Uber religiously installed on my phone.
Last edited: Nov 15, 2021

A different kind of casino luck !

Officially adopted the stray dog I ran over last week.
2 3 4