PBramble said:
61 tons of goods a whole year? Oh no, say it isn't true. WTF are they moving, pillows?
Click to expand... 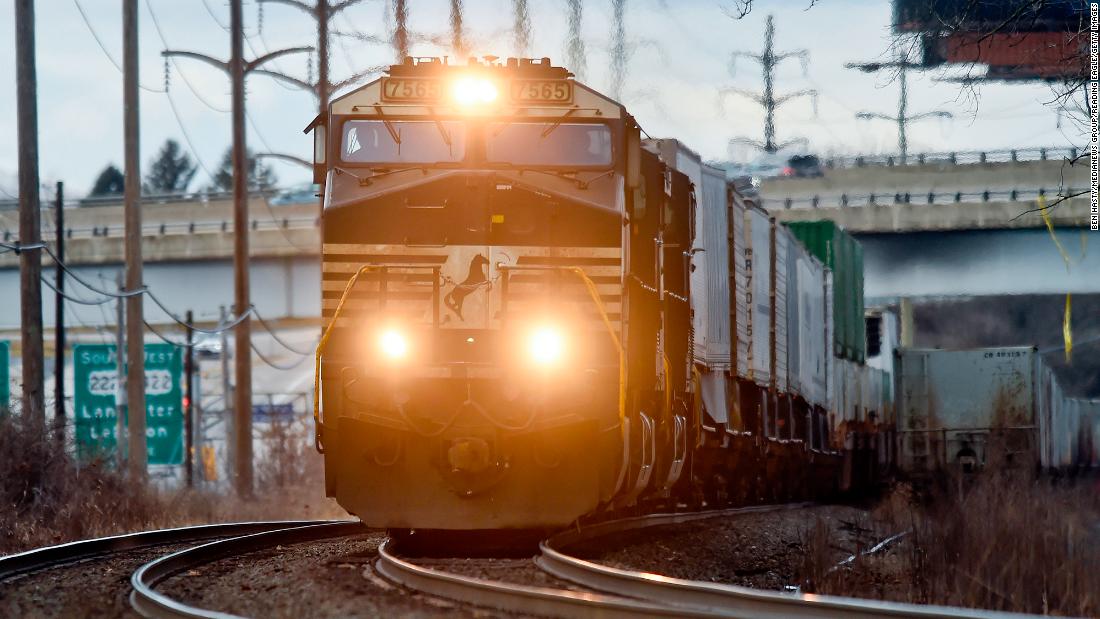 Slim Deal said:
I don't want the idiot to do anything. The idiot can't speak coherently, he is a thief, an all around jackass criminal. Everything he touches has turned to sh!+.

Well, it's a good thing he did. There's already a shortage of rail workers and cars delivering goods, especially feed/grain for livestock in the SW US.

All he needs to do is appoint the PEB. That's it. More likely, all he needs to do is sign a piece of paper. Yes, he's an idiot and a jackass. Be that as it may, there are some things that need to get done and you'll benefit from them. This is one of those things. A strike would be a really bad thing right now for a lot of people. And s**t has a way of snowballing downhill.

The Presidential Emergency Board that Biden named Friday has 30 days to try to find a solution satisfactory to both sides.
Click to expand...

I wonder if rail equity will be part of the deal.

The stakes are high for Biden, who wants to tackle inflation-stoking supply-chain woes and is already working to reach a deal in the critical labor talks at West Coast seaports.

If the president declines to intercede in the railroad labor negotiations by appointing a Presidential Emergency Board (PEB) before 12:01 a.m. EDT on Monday, the railroads and unions could opt for operational shutdowns or strikes, respectively. If appointed, the board would make recommendations that could be used as a framework for a voluntary settlement.

A White House official told Reuters the administration “is going through the standard process that has been used in the past when considering a PEB.” The White House declined further comment.

Union officials indicate that they do not want to go on strike, but are being forced to consider the option to try and obtain better benefits and wages, as well as to address staffing issues.

The unions have worked without a contract since July 1, 2019.

The two sides were forced into a 30-day “cooling off period” after failing to reach an agreement working through the National Mediation Board. The cooling off period prevents unions from striking or railroads from locking out their workers while they continue to negotiate.

That cooling off period ends at midnight on July 18, and a coalition of unions could choose to go on strike at that point, said Sheet Metal Air Rail Transportation union president Jeremy Ferguson.

However, the Railway Labor Act, which sets out the rules for these kinds of disputes, allows President Joe Biden to appoint a three-member emergency board to investigate and make recommendations to both sides about how to settle their differences.

The union is not allowed to strike during the Presidential Emergency Board’s investigation.
This potential strike is a serious issue. Yet, in this summer of January 6th drama, gun control kabuki, and abortion theater, the press has spent next to no time covering this issue.

Should a strike occur, there are some supply chain statistics to keep in mind. About 1/3rd of American exports are transported to rail. Freight rail is part of an integrated network of trains, trucks and barges that ships around 61 tons of goods per American every year. Many of those goods include essentials, like energy and food.

As of July 12, over 99% of union workers have voted to authorize a strike.

The membership of the Brotherhood of Locomotive Engineers and Trainmen voted overwhelmingly Tuesday to authorize a strike if progress on a new labor contract isn’t made by the end of the week. The union is one of 13 rail worker unions negotiating a national labor contract after the previous contract expired in 2019.

The vote comes days before a federally mandated “cooling off period” between the unions and rail carriers is set to expire, after the two sides failed in June to reach an agreement before the National Mediation Board.

The supply chain is about to go off the rails.
Click to expand...

Oil from Canada is going to pretty much stop. Sleepy Joe must still be at the wheel.

I'm pretty sure Sweety Pete Bootyjudge is all over this one to come to an agreement before the alphabet soup nazis miss a shipment of colored markers and unicorn strap-ons. Guess it would be a good time to switch all the locomotives to pure electric too while we're at it!
C

I can tell you I am absolutely no fan of unions. They are a toxic blight on junction of labor and the economy, but the relationship between labor and management in the company I’m familiar with is the most hostile I have ever witnessed from the management side. The guys getting it done in the ballast are by and large proud blue collar hands who are trained and held current on qualifications like nobody’s business. Pride in performance is highly evident. I’m not going to shoot you through the daisies and tell you there isn’t dead weight. That’s what the unions tend to preserve. The hours and physical demands you would have to live to understand. There’s a good reason why there’s not a huge pool of retirees getting long term pensions. They die pretty quickly after retirement. They’ve been trying for twenty plus years to get rid of company hands and replace them with contractors. Part of the hold up is the federal standards in place to operate and the talent ain’t that deep in the not eligible for employment with the company pool.

During the golden age of American industry they maintained to the highest level for maximum operating efficiency. Now they stay just above the minimum for economy. Just a symptom of much larger problems that plague the fabric of the country.

But does Buffet own the railway anyway?
Zero sense.....

HarryBear said:
But does Buffet own the railway anyway?
Zero sense.....
Click to expand...

The liberals are eating their own, now Biden since he’s leading the pack
2

Teachers in the second largest US school district about to strike