But we have a lot of new members now, so I looking forward to the new stories!
Please share!

Dorkus said:
I don't know if this is a ghost or not but I picked it up in my game camera almost two years ago. Just seems odd to be in the middle of 750 acres, late at night in the rain if it was a person. 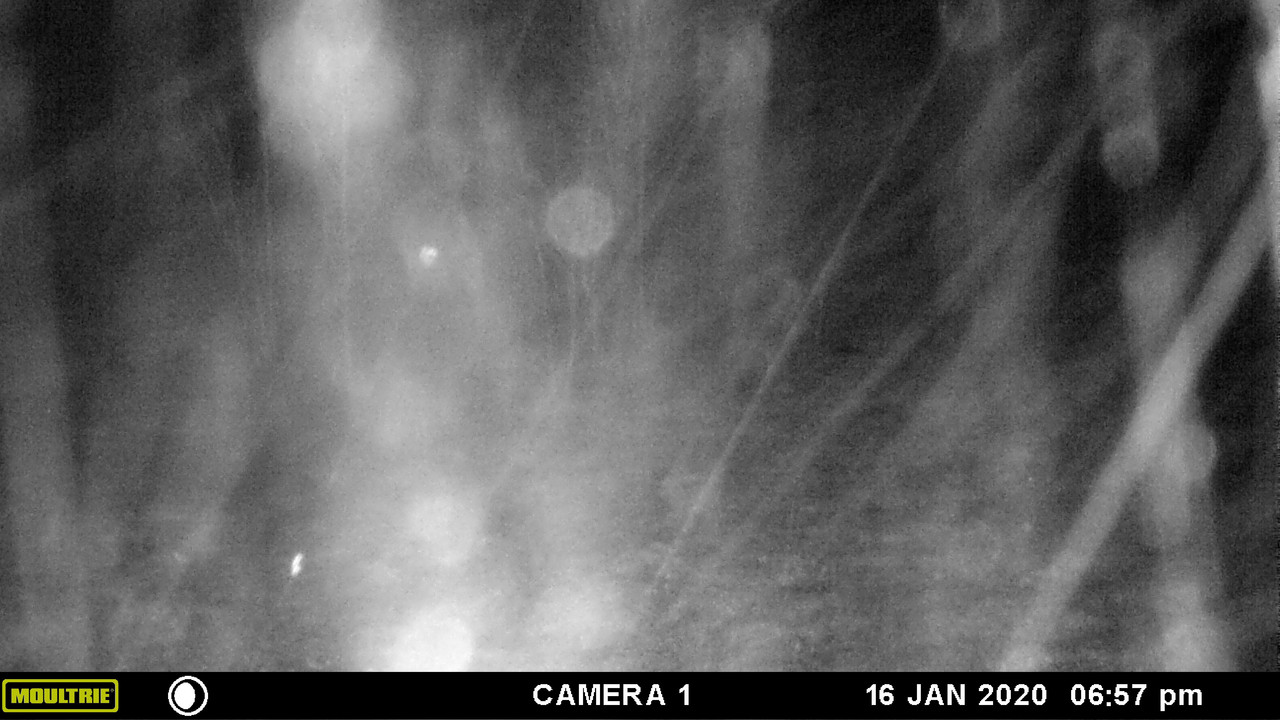 That is definitely odd. Sure looks like a person or figure of a person.

In 2000, my wife and I bought our first house in Yukon. It was nice, but outdated. We remodeled a different room each year we lived there. In 2002, I gained custody of my daughter who was 10 years old. She often said she heard noises in her bathroom and the wall between her bedroom and bathroom. Nearly every night, her shower curtain rod would fall and the shower curtain would be on the floor in the morning. I even used silicone adhesive to secure it to the tile and it would still come down. We always jokingly told her it was the ghost that lived in her bathroom, pulling it down each night.

In 2003, we decided to remodel her bathroom. I took everything out; toilet, tub, sink, cabinets, and stripped the shower down to the studs. About 2 weeks into the remodel, I was sitting on the couch, watching the noon news. My wife was at work, youngest daughter at daycare and oldest daughter at school. I heard something and looked to my left, down the hall to her bathroom. Standing there in the hallway was a girl about 12-14 years old, wearing a white gown of some sort and her hair was up in pigtails. I immediately thought it was my daughter and I said, “Why aren’t you at school?” I stood up, walked around the couch to go down the hall and the girl was gone. Again, middle of the day around noon. I have never done any kind of drugs, nor have I ever drank alcohol.

I finished the remodel about a week after that. Once it was all done, I put the shower curtain up and it never came down again, and my daughter quit hearing noises. None of us ever experienced anything else unusual in that house. I have often wondered if a girl had been murdered in the bathroom, or possibly drowned in the bathtub. It just seemed highly coincidental that it escalated when I took the tub out and ceased when I put the new tub in.

RickN said:
Yep, been awhile since we had one of these but here is my favorite.

Before I became disabled, the wife and I owned a medical equipment company selling world wide to governments, famous hospitals, individuals and even Hollywood. (yea I am proud of that business) Anyway we would get old beat up wheelchairs and other equipment, rebuild it and either sell it to people or donate to charities. Since I took care of our computers, website, and rebuilding much of the equipment I worked at night mostly.

We got in a batch of equipment that included a wheelchair that would not stay put. I had it in the back of the warehouse until I could get to it, the next morning the wife and sales people would find it up front. This happened several times. I even blocked it in but the next morning it was up front again like someone was sitting and looking out the window.

While rebuilding it I was putting new solid tires on the rear wheels and my hand slipped catching my thumb tip between the tire and rim. I said a few choice words I may have learned in the service and clear as can be I hear a women's voice say "Don't cuss" We would all smell old time perfume at odd times. Wife said it was Lilac Water she believed.

Also one of our employees was a pretty rough old gal some of you might call a bull dyke. After a bit she refused to go out into the warehouse by herself. No body else out there but small parts would get thrown at her. She would round a corner and find wheelchair front caster wheels on their side spinning, etc.
Click to expand...

Not much of a ghost story, but when I lived in twin oaks in Claremore there would be times I was home alone in my apartment playing on the computer and I would see a shadow of a figure go behind my back. Exactly like a person walking by, but nobody there.

undeg01 said:
That is definitely odd. Sure looks like a person or figure of a person.
Click to expand...

Notice it is January too, so it was too cold (at least for me) to be walking in the rainy dark.

I hate to debunk orbs, but my 2 cents. My wife and I got into the plethora of ghost/Supernatural shows on TV especially on the Travel Channel. On our evening walks we brought our digital camera (smart phones were not out quite yet) and took photos around the neighborhood, homes with sprinkler sytems that had been on or were on all had orbs. I suspect that camera visible orbs are water droplets.

I have had "paranormal experiences" and one had occured when lived in a large home built in the 1890's. I had heard that people had died in it from a fire in the the early 1910's and there were charred beams in the basement from the fire. The basement was dimly lit and always gave me the creeps when I went down there to do laundry or to retrieve tools or cleaning supplies. One day in early October I was home ill from food poisoning. My roomates were at work and I was stuck at home in bed. One of my roomates had a cat. I had my bedroom door closed and had fallen asleep. I awoke to a cat sitting on my bed next to me, so I gently picked up the cat, tossed him into the hallway and closed the door. I soon dozed off after throwing up again. About 1/2 hour later I was awoken again by the cat on my bed and chest. Again I looked at the door which had been shut and was now open wide. I thought I had pulled it shut, it clicked shut or so I had thought. Cat back in the hall, this time though I pulled the door and made sure it was latched and then locked the door and pulled on it a couple of times to make sure it was shut and would stay that way. This time I was feeling a bit better. I got back into bed and fell asleep.

About an hour later though I woke up. Bedroom Door Wide open, cat was again on the bed. It was late in the afternoon so I decided to watch some TV in the livingroom. Then it hit me, there was a faint smell of something burning. I looked throughout the house and there was no fire, not even in the basement.

Was it Paranormal, was it from the spiritual world that my door kept opening? The cat normally avoided me, why did it want to be in my bed of all places?
Last edited: Oct 6, 2021