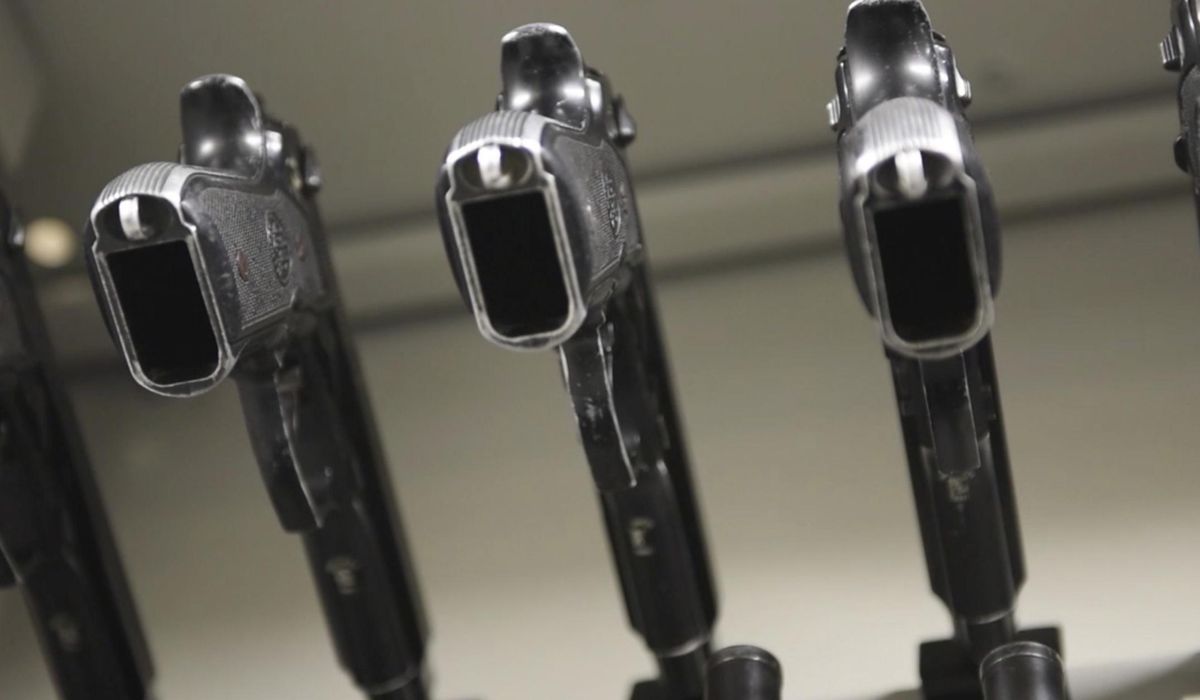 The Justice Department on Monday announced a new federal gun control rule aimed at ensuring gun owners have secure storage devices.
Under the new rule, federally approved gun sellers will be required to have gun storage or safety devices available onsite for potential buyers as required by the Gun Control Act.
According to the department, a secure gun storage device is defined as “a safe, gun safe, gun case, lock box or other device that is designed to be or can be used to store a firearm and that is designed to be unlocked only by means of a key, a combination or other similar means.”
The department submitted the rule to the Federal Register. If approved, the change will amend the Bureau of Alcohol, Tobacco, Firearms and Explosives’ gun regulations and go into effect on Feb. 3.
Attorney General Merrick B. Garland said the change is meant “to reduce the risk of firearms falling into the wrong hands.”
“Gun safety is a Department of Justice priority, and we will continue to take all appropriate steps to help reduce the number of people killed and injured by the misuse of firearms,” Mr. Garland said in a statement.
Lars Dalseide, spokesman for the National Rifle Association, told The Washington Times in an email that the gun-rights group “has always supported the safe storage of firearms.”
The rule comes one month after the parents of Ethan Crumbley, the 15-year-old accused of fatally shooting four students at Oxford High School in Michigan, were arrested and charged with involuntary manslaughter because, authorities say, they failed to secure the gun he used in the killings.
Oakland County prosecutor Karen McDonald said at a news conference that parents James and Jennifer Crumbley could have prevented the Nov. 28 mass shooting — which also left seven students injured — but they ignored various warning signs.
One day before the rampage, Ms. McDonald said the school alerted Ms. Crumbley that a teacher saw her son searching for ammunition on his phone and she reacted by sending him a text saying he needed to “learn not to get caught.”
On the day of the shooting, the parents were asked to come to the school after a teacher discovered a drawing by Ethan that appeared to show a gun with phrases including, “help me,” “the thoughts won’t stop” and “blood everywhere.” School officials told the parents that their son needed immediate counseling, but they reportedly decided to let him stay at the school.
According to police, the parents also did not check Ethan’s backpack where he could have stashed the 9 mm Sig Sauer SP2022 semi-automatic pistol that they had recently bought him as a Christmas gift. The pistol, Ms. McDonald said, had been left in an unlocked drawer in the Crumbleys’ bedroom.
“They had every reason to know he was dangerous and they gave him a weapon and they didn’t secure it and they allowed him free access to it,” she said at the conference on Dec. 3.
The parents have each pleaded not guilty to four counts of involuntary manslaughter.
There were 34 school shootings last year, more than twice the number recorded in 2020 (10) and ten more than in 2019 and 2018, which both had 24, according to EdWeek.org.
Laura Cooper, executive director of the Major Cities Chiefs Association, told The Times that the organization supports common-sense gun policies.
“Every responsible gun owner has a duty to store their firearm(s) safely, and ease of access in obtaining a safe storage device is helpful,” Ms. Cooper said in an email statement.
The ATF on Monday also published a “Best Practices Guide” for federal gun sellers which includes information on federal gun laws and regulations.

Never let a the opportunity created by a tragedy go to waste - Democrats
First it's the sellers. Then it's the owners.

So an FFL would have to offer a secure device for sale?

As stupid as this is, at least it only requires a safety lock and not that the FFL would have to carry safes and locking containers. (I guess, give them time - death by a thousand cuts)

Since all new guns ship with a cable lock, I would think no inventory would be needed by the FFL (unless selling or transferring lowers and used firearms)

Afghanistan is a secure place in their mind. FJB!

Look Brandon being Brandon and making another law the BG's will ignore and the DA's will not prosecutor for!! Good going Joe!! Maybe he should have put a safety on SUV's while he was at it!!

Fast and Furious? Go piss up a rope!

okierider said:
Look Brandon being Brandon and making another law the BG's will ignore and the DA's will not prosecutor for!! Good going Joe!! Maybe he should have put a safety on SUV's while he was at it!!
Click to expand...

Do not guns generally come with a lock/security device already?

radarmonkey said:
So an FFL would have to offer a secure device for sale?
Click to expand...

If only Biden's son had installed a secure lock on his laptop...